My very first day in the SCBN (Special Care Baby Nursery), I met Bedan.  Bedan was born with a congenital problem called an encephalocele – this is where a portion of brain lining, spinal fluid and occasionally brain tissue protrudes out of a gap in the skull, covered by skin.  In Bedan’s case, it was protruding right between his eyes, causing his nose and upper lip to be split by a protruding mass.

Before you read any further, this one has a happy ending.  Thought I’d set you at ease!

Bedan had his first of 3 surgeries in his first week of life.  This removed the brain lining, some fluid and a tiny portion of protruding brain, and left him looking like you see him (top left).  A huge crevass between the halves of his nose, and a top lip that wasn’t complete.  The plastic surgeon who would be in charge of reconstructing his midface was responsible for the scotch tape – he assured us that if we just pulled the sides of Bedan’s face together, over time it would become close enough for him to sew the halves together again. 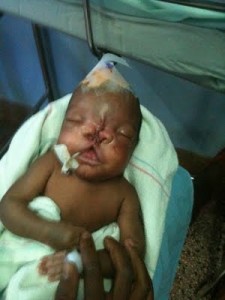 Despite the fine work of the neurosurgeons, Bedan developed meningitis.  In Kijabe, this is no small thing.  His infection was caused by an uncommon bacteria, and it took 3 weeks of our most potent antibiotic (meropenem) to clear the infection.   But it cleared, Bedan soldiered on, continued to grow, and continued to have his high-tech scotch tape therapy replaced and tightened, shortened and tautened.

So the plastic surgeons were able to sew his nose and top lip back together (see right for how he looked straight after surgery – the bandage on his head is for an IV for fluids and medication).   He now had a top lip – and after a couple of weeks, the plastic surgeon said he could start to breast feed.

As with so many babies we see here born with anomalies, Bedan came up with another complication.  A new swelling developed further up on his forehead – an ultrasound confirmed he had hydrocephalus and would need a VP shunt (essentially a hose from the brain to the abdominal cavity to drain away excess fluid).  So Bedan underwent his third neurosurgical procedure, and came out like a champion.  No complications, starting to feed by mouth after a few days.

Below is a picture of Bedan last week – day 50 of life, and ready for discharge.  He went home with his mum, feeding by mouth and thriving.  He isn’t out of the woods completely – he will have followups with neurosurgeons and plastic surgeons, and anyone who knows a child with a VP shunt knows that constant vigilance is required for the hose breaking or blocking and fluid starting to build up in the brain again.

Bedan had a hospital bill of 247,000Ksh when he left – around $3000.  Through the generosity of several organisations, Bedan’s family paid 5000KSh, and the rest will be covered.  It’s days like that that make this job so incredibly rewarding. 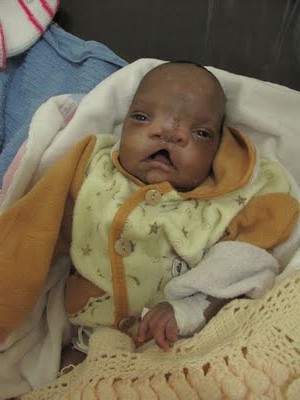 Delivering final exams during the pandemic: in the last week we have administered exams to students in Tanzania, Rwanda, Kenya and South Sudan…

‘We must do better,’ Chitwood tells staff

Rosslyn Academy (the Christian international school in Nairobi on whose Board Andy serves) is co-owned by the Assemblies of God, Southern Baptist..

On our second day in Kijabe, we were driving around the station to take photos.  As I was snapping the...