Sometimes medicine here is very, very different from what I used to do in the US and Australia.  And then there are some kids that look the same, no matter what country you are in.

Sera came to us with a puzzled and worried mother – she had been sick a week or so ago, but had been given an antibiotic at another hospital called septrim.  A commonly used medication around the world for many childhood infections.

But the day before yesterday her skin had started to blister, and she became very sick – so she was brought to us, and it quickly became apparent that she had one of the worst allergic reactions you can get short of anaphylaxis – toxic epidermal necrolysis.

Septrim contains a chemical called sulfamethoxazole, and when allergic reactions occur they cause anything from a mild rash to the entire skin essentially falling off.  And on the spectrum of reactions, Sera’s was severe –  30-40% of her skin was affected with blistering or sloughing, and we weren’t sure if this was the tail end or the beginning.  And that was just the skin we could see – what is worrying is that the lining of the oesophagus, intestines and mucosal surfaces of the body can be just as badly affected, only you can’t see them. 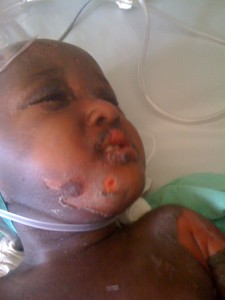 The treatment is basic – stop the bad drug.  Give IV fluids and proteins to try and stop the body losing all of its water and plasma from the open skin.  Pray – because no matter what you do, around 30% or more of these children die.

So that’s what we did.  Sera is the first child I’ve ever seen with this condition, and I was worried.  Over the weekend she was admitted, I and the anesthetist on call for ICU were constantly monitoring her vital signs, her lab work and the internet to reassure ourselves there wasn’t anything else we should have been doing for her.  We were constantly asking each other – do you think I am missing anything?  We were unable to measure central venous pressure, unable to give fluids containing protein, unable to transfuse with plasma, and drugs which may help, such as IVIG, cost over $1000 a dose and are simply unavailable here.  We just did what we could as quickly as she needed it, and prayed.

And she recovered.    Sera went home later that week, looking beautiful as you see her in the top picture.  It’s nice to be a part of a happy ending, and Sera is one of them.

The last 3 weeks have been a little like Christmas for us - both at home and at the hospital....