So this post is mostly thoughts about allowing children to die with dignity.  I thought I’d make that clear upfront, so you can choose whether to wade through it with me, or not.

There are 2 children whose faces won’t leave my mind this week.  They both are going home from the hospital to die.  And the more I think about it, the more I think that if these children lived in Australia or the US, we would spend the next 2 years doing everything we could for them, with a lot of pain, and they would probably die anyway.

Narinoi is 9 months old.  A sweet princess whose Masaai mother brought her in because she had been having trouble breathing.  She had pneumonia, but underlying that her heart didn’t sound right, and on her chest xray it didn’t look right either.  And as her chest infection cleared, her oxygen level remained alarmingly low – and when she got upset, it would drop to the point that we couldn’t figure out how on earth she was still alive. 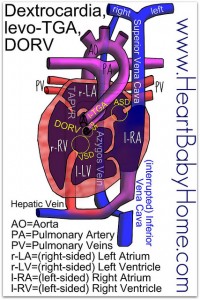 We finally got her stable enough to send her to Nairobi for an echocardiogram.  A normal heart should look like the first picture (top left).  She came back to us with a horrible report – dextrocardia, transposition of the great arteries, AV canal with common AV valve, pulmonary stenosis and total anomalous pulmonary venous return, similar to this picture (right).  An absolute mess of blood mixing where it shouldn’t, and then being unable to get to the lungs properly.  A condition that, if surgery were even possible, would require at 2-4 operations.  Each of them hours long, on cardiac bypass, with a significant chance of complication each time – and each at enormous financial and emotional expense to the family.

There is acutually a visiting pediatric heart surgery team coming to a hospital 3 hours away from us in 2 weeks time.  So, pessimistically I called them to discuss Narinoi’s case.  In the last week, her oxygen levels have been low – in the 40’s-50’s for a lot of the time, when the normal is 90% or more, and a lot of time less than 80% with one of these conditions probably means that the brain has been injured.  And so the doctor at Tenwek told me, as I thought he would (and should) that with the limited resources they have for post-operative ICU care, there were other children who had a much better chance than she did of making it through.

And so, after long discussions with Masaai interepreters, the family has agreed with us that she would be best off at home for the rest of her probably short life.  She went home on Friday.

Ruth is a 1 year old with neuroblastoma, one of the most common childhood cancers.  She came to hospital for investigation of a large mass in her belly, and when the surgeons took a look inside, found tumour everywhere.  They cut a lot of it out – to test, to make her more comfortable, to allow her kidneys to drain.  But it will be a temporary relief.  In Australia or the US, she would probably receive months of chemotherapy, radiotherapy, possibly a bone marrow transplant.  Months of therapy, with horrible side effects and still a very low chance, with her extent of disease, of survival.

She will probably be discharged from the surgical service this week to spend her final weeks or months with her family, with the support of our palliative care team.

I wonder, as I think about these two precious children, in which country they are better off.  Is it better to stop now, to let them go home, to give their parents the news that the end is not far away?  Would it be better, in another country, to give their parents the numbers – there is around a 30% chance, or less, that your child will make it – if they do, they will live a long life, but if they don’t, their last few months will hospital-based, clinging to the edge of life as we fight this battle with them squarely in the middle.

Do we do a good enough job, in rich countries, of deciding not to do anything sometimes?  With a world of information and slim chances and maybes at parents’ fingertips on the internet, are we a little too good at trying to make sure no child ever, ever dies?

I’m a parent.  I cannot imagine it being Riley as one of these children – I think my default, as a parent and as a physician, would probably be to do whatever it takes.  Because the depth of love you feel for a child as a mother makes you very, very reluctant to face the thought of losing your precious one.

At the same time, you want your child to have joy, to have comfort, to have peace, to have security.  And sometimes maybe that means letting go.

It’s hard enough facing these questions with someone else’s child.  I am so very grateful that at this moment, I don’t have to face them with mine.

7/12/11 – Here is a great article on the importance of end-of-life discussions and of doctors being advocates for our patients: How Doctors Die.

Sometimes medicine here is very, very different from what I used to do in the US and Australia.  And then...