Whew!  What a month it’s been.  Moving house, Moffat’s semester ending and final exams to administer and grade, my graduate school semester ending and papers on Augustine and grace to be written, the usual cycle of sorrow and joy at the Hospital, children who are growing and just being all-around simultaneously delightful and maddening, and normal life all mixed in with the signs of spring that are unfolding around us:  birds singing, flowers everywhere, and more rain than you can shake a stick at.

When the push is on in seasons like the one in which we’ve been, I get into a sort of “mission-focus” mode, where I unconsciously sacrifice everything else for the “mission”, whatever the that happens to be at the time.   To put it another way that sounds less grand or without military jargon, “head down, bum up”.

When I was on a submarine, it was operating a warship.  On an infrastructure project, time/cost/quality/stakeholders.  In vocational ministry/humanitarian work, the “mission” might be patients, students, mentees, or parishioners.

There are a number of pitfalls in my mission-focus mode, not least among them how one defines the “mission”.  Leaving that aside for the moment, a key flaw of this mode is the “everything else” that gets sacrificed:  rest, prayer, health, exercise, relationships, family, capacity-building.  It is a fascinating reflection exercise to consider how quickly and easily I justify sacrificing these things in the name of “productivity” or “mission”.

Mardi and I started a habit several years ago of setting aside time to evaluate our lives at quarterly or six-monthly intervals, cutting out things that are no longer priorities and highlighting important areas of focus we don’t want to sacrifice.  We find we have to do this regularly, as it is so easy to forget that when we say ‘yes’ to something, we are saying ‘no’ to something else. 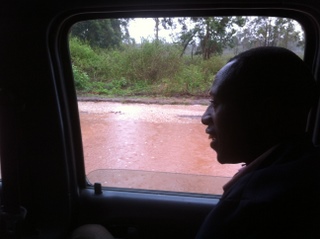 Site visit to Monkey Corner Springs through a flooded road

Time is a zero-sum commodity, we have learned the hard way, and if we keep piling things into our schedule, we force ourselves to cheat in other areas.  With both of us working and myself in graduate school, if we say yes to every opportunity to serve–RVA, Moffat ministries, church, SIM, the endless parade of Hospital needs–we must say no to something else currently in our schedule.  Otherwise, we start to ‘cheat’ on the things we’re doing, and it’s usually family, health, and our spiritual lives that we start to cheat in first.

So as we wind up this season and look forward to Advent and then Christmas, a few highlights stand out as high points of joy, hilarity, and moments when the clock seemed to stand still for a while:

–Riley (4) piping up at dinner a few weeks ago and saying, ‘I’ll thank God for the food, Daddy!’

–A resident at the hospital coming to pick up the large baby crib left for him at our house by the previous family, and putting the whole thing on the back of a piki (small motorcycle), strapping it down, and driving away with it.  The size ratio was roughly that of putting a Volkswagen on the back of a mountain bike, and the whole thing was like a Mr. Bean episode.   I confess I made strong intimations that there was no way on earth he was going to pull out of our driveway with THAT on the back of his piki.  Pull out, he did, and I walked back into the house to Mardi who said, ‘You didn’t take a picture????’

–going on a site visit to the Monkey Corner Springs pump station two weeks ago, and, reflecting on the probability of being car-jacked on the notorious stretch of road it lies down, leaving my wallet and phone at home.  Up to that point in my life, I don’t think I’ve ever prepared for a site visit by removing valuables from my person, and given the recent spate of car-jackings we’ve experienced around here it probably won’t be the last.

–telling my Spiritual Formation class at Moffat that I would be their lecturer next year for their Biblical Leadership topic, and them breaking out in cheers and clapping.

–numerous mentoring sessions with the students in my Practical Ministry/Mentoring group at Moffat.  Getting to know them, their passions, and their hearts.  Some of their background stories are just horrific; almost all have lost at least one parent and many are orphans. 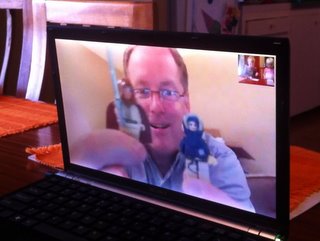 –the Skype chat with Papa Bill in Grand Rapids a few weeks ago where he did a puppet show with “Princess Riley and Captain Liam”, using Lego Star Wars figures that Quinn and Will Brennan (Riley and Liam’s first cousins) gave him to “tell the Star Wars story to Riley and Liam”

–asking Riley to sweep under the table after dinner, and giving her the dustbuster to do it with…the look of wonder in her eyes as this magical tool made all the crumbs disappear was priceless.  She then proceeded to drain the entire battery by “sweeping” the entire house with it for the next 15 minutes.

–returning from Nairobi last week after dark, in the driving rain and fog.  Each of these three conditions we try not to drive in if we can help it, all together, it was the unholy triumvirate of craziness.  By God’s grace I got home safely.  In the final 300 metres, on the steepest part of the trip down the mountain on the dirt road I slid while in four wheel drive into the drainage ditch on the side of the road.  Luckily there was a sort of small flash flood in it from the rain, and the water pushed me down the last part of the hill onto the level road home.  I’m not sure I am supposed to have enjoyed that as much as I did!

–helping our outdoor worker, John, save some of his wages each month so that he can attend driving school in January, and get his driver’s license.  This will be a huge boost for his career prospects, as driver’s licenses are expensive in Kenya, and qualified drivers are sought after.  Every time he talks about going to driver’s ed he gets a huge smile on his face, which I compare to my attitude before driver’s ed in Albion, Michigan, which was something along the lines of, “Man, this driver’s school is taking away valuable skateboarding time!” 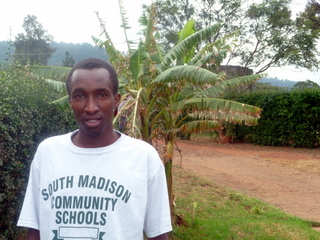 John, our outside worker and soon-to-be-driver-qualified gardener

–sharing life with Elizabeth, the lady who lives just up the mountain from us and comes to our door weekly selling delicious homemade cinnamon rolls.  She lost her husband to cancer a few years ago, her son to injuries sustained during a violent home invasion the following year, and has stayed away from church and God ever since.  “How could a loving God allow this to happen to me?”, she asked me this morning.  She is a wonderful cook, and a precious lady, and we are praying that she would be able to move through this season of darkness and grief and emerge on the other side.

A few highlights amongst a “head down, bum up” season.

There's something about learning a new language that I just do not enjoy. It's more than the hard work, spread...