One of my joys in Kijabe is the time I spend running a few times per week…like with mountain biking, most of the trails people use to walk from town to town are also decent running trails.

Running is a Kenyan national pastime, and Kenya regularly produces the world’s best runners.  So people ‘get’ runners here (and will cheer you on as run by them)…although the high altitude and not-very-gentlemanly elevation changes in Kijabe mean runners are scarce.  When I pass a Kenyan mama on the trail with a load of sticks on her back, or carrying large formerly-enormous-vats-of-cooking-oil-and-now-contain-water jugs, I do feel slightly ridiculous.  I can hear them thinking to themselves as they shake their heads, ‘crazy mzungu, can’t just walk to work and climb 1,000 feet for his exercise like the rest of us, he has to put on those ridiculously small shorts and funny shoes.  What a strange people.’

My favorite running trail is reasonably level and follows the curve of the escarpment from Kijabe out past a nearby town called Machane towards Monkey Corner Springs, the site of Kijabe’s principal source of water.  I used to run on the dirt road, but we’ve had a spate of successful carjackings lately in that area so I stick to the trails just uphill.  The view looks out over the Rift Valley, and it is just breathtaking.  I am recharged looking out over the vista as I run, and I have been known to break into song.  Usually something by the Red Hot Chilli Peppers or U2 punctuated by staccato, ragged breathing, as I struggle to pull in oxygen at more than a mile and a half above sea level, but still a song…

As I ran this evening, I was brought short by something I hadn’t really taken notice of lately:  a complete transformation of the Valley floor.  This part of Kenya, like much of northern Kenya has been in drought for a while, and so when we arrived in April the Valley was a dry, dusty floor of various shades of brown, surrounded on either side by brown mountains.  This is what it looked like when we arrived–I took this picture while climbing Mt Longonot with Brenton Wait when he was over for a visit: 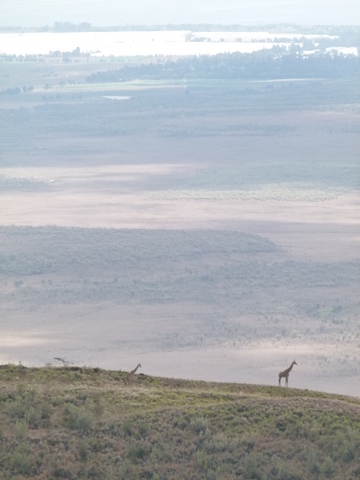 The drought broke a few weeks ago, and it’s rained almost every day for nearly a month.  This is what I saw this evening:

I was just stunned by the difference between the two Valleys.  One a lifeless, dusty, barren place.  Then, a new season with a lot of rain, and the Valley is totally transformed into an unbroken panorama of verdant garden with kaleidoscopic shades of green.

What a difference a new season makes.

I’ve been experiencing a dry season in my own life, my own “dark night of the soul” as John of the Cross referred to it, for a few years now due to a number of life events.  But I have noticed in recent months that glimmers of green are starting to appear, and it may be that I am entering a new season.  I’m not sure, but I am hopeful.

As I ran today and noticed this astonishing change in the Rift Valley, I was filled with hope that seasons aren’t permanent, their impermanence is good and natural.  Each season has a purpose, and is useful and life-giving in its own way.  Today, I am struck by how the ebb and flow of God’s good creation mirrors my own spiritual and physical journey.

Being an Australian in Kenya with a whole bunch of Americans means that we get the best of all the...