I woke up groggily for a few seconds in the wee hours of Monday morning to hear Mardi talking on the phone.  It was the tail end of her weekend on call; phone calls and trips to the Hospital in the middle of the night are part and parcel and I usually don’t wake up.  She was talking to the doc on call in our little five bed ICU again, and I just snuggled down a bit deeper and went back to bed.

You see, a few days prior, a young boy was discovered by the side of the highway at the top of the mountain above Kijabe.  He was bleeding from a head injury, unconscious and appeared to have been hit by a car.  Someone found him, put him in their car, and brought him to the Hospital.  No name, no parents, he was seen by our surgeons and then put in the ICU as he continued to deteriorate.  Six hours later, his mother was found and came to Hospital.

Mardi spent part of Sunday helping the ICU doc troubleshoot why this little boy continued to go downhill and didn’t wake up.

At 3am, she figured out that his continued deterioration was likely due to a rare genetic reaction to a medication he received.  The Hospital doesn’t stock the antidote in its pharmacy, and so there was nothing further to be done.

I woke up again at 6am…another phone call.  He was gone.  Despite all the good efforts to stabilise him, the little boy died.  He never woke up from the injuries he sustained in the hit and run accident.

Five hours later…11am.  It’s our day off, we took the kids into a little water park in Village Market in Nairobi.  Heaven on earth for Riley and Liam (and Mum and Dad)?  A water park with a few slides, wading pool and inner tubes you can float down a little concrete channel in.  Liam wasn’t too keen on what he was pretty sure were Class 5 rapids, but Riley was game.  So I put her on my lap and we floated down together.

Water park…wonderful; my 4 year old on my lap giggling and shouting as we enjoy it together…priceless.

As I floated with Riley, I thought about this little boy.

I was deeply moved by the unvarnished reality of the moment.  Here I sat with my daughter on my lap, and five hours previously, a child found bleeding on the side of the road from a hit and run died under tragic circumstances.  It was just so…real.

I am struck in Africa by the stark inability to ignore real life, to pretend it’s not happening…a child dies a tragic death, we grieve, and five hours later we are filled with joy as a family just being together.  This is reality:  it happens everywhere.  At the same time we are (rightly) enjoying something–family, a good retirement plan, a fulfilling job–people suffer, injustice happens, children are hungry and die unknown. 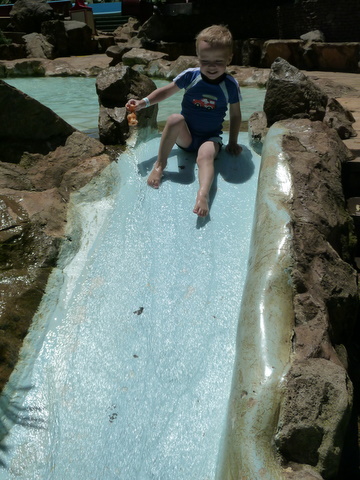 Liam was a bit cautious at first, but after his toy giraffe did it a few times he was game

Here, there is not much of a veil between joy and sorrow.  The sorrows don’t make the joy any less sweet, and the joys don’t make the sorrows any less sad.  Quite the opposite, I think:  accepting the reality of suffering and grieving it properly and well makes the joys even deeper for me.

It seemed easier in Australia and America to be less engaged in this reality of simultaneous joy and sorrow.  The veil is up.  Perhaps because it wasn’t happening to us, it was easier to sort of pretend it’s not happening, convince myself it is someone else’s problem, or invest considerable resources and effort to make sure the sorrows never happen.  But here…I can’t avoid it.  It is real, and it is in front of me.  The veil has been ripped down.

I am nearly able to say with conviction that I prefer the perspective I have here…nearly, but not quite.  I cry a lot more in Kijabe than I did in Adelaide or Jacksonville.  I feel like grief and sorrow are closer friends than they’ve ever been.

But I am learning that I’d rather live a few short steps from suffering, with the veil down, and have a theology that is able to embrace the full range of human experience, than to live far away from it and have the veil in place.

Reality.  Seeing the world as it really is, and engaging with people on that basis, not hiding from it or pretending its not happening.  Not being shocked into paralysis by it, or offering platitudes or trite one-liners to people going through really awful times.

I am reminded of what Dallas Willard says in The Divine Conspiracy about the “Beatitudes”:  Jesus’ collection of sayings in Matthew including “Blessed are those who mourn, for they will be comforted”.

Is it true that “Earth has no sorrow that heaven cannot heal?” It is true! That is precisely the gospel of heaven’s availability that comes to us through the Beatitudes. And you don’t have to wait until you’re dead. Jesus offers to all such people as these the present blessedness of the present kingdom—regardless of circumstances. The condition of life sought for by human beings through the ages is attained in the quietly transforming friendship of Jesus.

I am grateful for this quietly transforming friendship of Jesus which makes it possible, even enjoyable, to live in a place where the veil between joy and sorrow is torn down.

And I am so very, very grateful for water parks.

Those Class 5 rapids are a real rush

This little princess is Hannah.  And for us, she's one of a kind - the very first baby to survive...