It’s Sunday morning and I’m almost exactly half way through my last weekend on-call for pediatrics.  Knowing this is the last time for a few months that I will need to be available to instantly run to the hospital for 48 straight hours, I said to a friend at the beginning of the weekend – it doesn’t matter if I don’t get any sleep, this is my last weekend!  Do your worst!

Which is, of course, exactly how last night worked out.

Our newborn nursery has space for 16 babies in cots or incubators.  So when I started rounds yesterday morning and found 19 babies there (including 2 sets of twins sharing incubators with their sibling), that didn’t bode well.  Hearing that there were two mothers in labor with premature babies didn’t bode well either.  The interns and I saw all the babies and realised none of them were ready to go home – and thus began the dance with the nurses trying to make space where none existed for the 2 babies we knew were coming.

Ultrasound is an amazing thing – I asked the obstetric team how big these babies would likely be, and they were able to tell me one was 10 weeks premature and would be around 1400 grams, and the other was 7 weeks only and closer to 1800 grams.  We sent one of the bigger babies in the nursery out to sleep in the same bed as his mother (the standard for newborns in our hospital), freeing up one space – and we just jammed another incubator into a space that didn’t really exist but had a power outlet for us to plug in one of the lifesaving oxygen-producing CPAP machines.

We were ready for the 2 babies.

And so, of course, the rest of the day consisted of babies arriving from unexpected corners, while the laboring mothers of prematures percolated slowly along.

First it was the 3 day old baby with a cleft lip who had been referred to us because he couldn’t feed.  We gave him a special bottle and mum some medications to increase her breast milk supply, and admitted him to one of the maternity beds to sleep together with his mum, leaving our precious nursery space available.

Next it was the “term” baby whose mother’s blood pressure was dangerously high – so after a c-section she came out clearly over a month premature and 1900 grams.  We managed to scrounge an extra cot from the bowels of the hospital and cram her into a space that had previously held a cabinet – the cabinet unceremoniously dragged to the milk-preparation room to be dealt with later.

At 8pm I was paged so the intern could tell me about a child with asthma he was admitting.  I thoughtfully asked and answered his questions, and together we came up with a plan of action.  As I was about to hang up the phone, he casually mentioned that he needed to go to the operating theatre for a c-section of a baby with “grade III meconium”.  A baby was about to be delivered who was swimming in a sea of its own thick stool.  This was a perfect teaching opportunity about how to try to make sure theses babies don’t inhale their own stool when delivered, avoiding the dreaded and potentially fatal lung damage that can occur.

I rushed immediately to the hospital, into the operating theatre – the baby hadn’t been born yet, so we started to prepare.  We didn’t have the special suction device needed to remove thick stool from a baby’s trachea, so we sent someone to find one as I connected a different, not-quite-as-good sucker.  As I connected the suction, the midwife rushed into the room with the baby – a floppy, not-breathing girl covered in yellow- brown slime.  Exactly the situation when the immediate action is to look deep into the baby’s throat, find the trachea, and put a suction tube down, before the baby takes a breath and inhales the stool past the point of no return.  We looked, we found, we suctioned.  It was time to help the baby breathe.

Except that in our rush to prepare the suction, we hadn’t had time to prepare the oxygen.  And nowhere in the room was there the bag-valve-mask device for us to pump air into the baby’s lungs.   I must confess I started barking orders at that stage.  I sent the midwife to RUN to the operating theatre to find one.  I dried and rubbed the baby to try and make it breathe.  Nothing.  No midwife.  I told the intern to RUN to the nursery to grab a bag valve mask.  I was left alone in the room with a blue baby with a dropping heart rate.  Which left mouth-to-mouth resuscitation.

After 5 breaths, the intern and the midwife both returned carrying bag-valve-masks – and the baby started to holler.  Indignant, protesting her unceremonious introduction to the world.

At midnight, I’d just fallen asleep as I got the page to the nursery.  The nurse answered the phone when I called – “the doctor says come!”, no further information required.   I arrived to find the first of the long-awaited premature babies had arrived – 10 weeks early as promised, but at 1240 grams a little smaller than we expected.  By the time I arrived, the intern had resuscitated a determined fighter who, after a few puffs of oxygen decided she was ready to go solo with the whole breathing-thing.  Once she was warm and dry we were able to put her into the expectant incubator with just a little oxygen to help her breathe.   A relief to know her little lungs had been matured by the medications the obstetric team had been giving her mother in preparation for this moment.

And there was another baby in the nursery awaiting admission.  A term baby, born again by c-section because the mother’s blood pressure was sky-high.  A big boy who was just a little surprised to have been born so suddenly, and whose lungs needed a little time to catch up.  He was pink, he was comfortable on a whiff of oxygen.  He’d be OK till morning.

At 3:30am I had fallen asleep on the couch to be woken again by a “999” page to maternity.  En route to the hospital I called to see what I was walking into.  A baby was being delivered feet-first, and after almost 30 minutes of the body protruding but the head being stuck, the obstetric intern had been called to assist, and she called me immediately knowing that I’d want to be there to help this baby whose oxygen supply had been cut off for some time.

I arrive with my heart in my throat, pessimistic – brain damage is almost inevitable after being stuck for so long.  I have time to see that, again, there is no bag-valve-mask at the bedside, and while a student runs to fetch one I put on my gloves – and the baby is out (“Thankyou Jesus!” exhale the midwives).  The bag-valve-mask is found and connected, and the intern and I jump to action – me pushing air into the baby’s lungs, the intern feeling the heartbeat and realising it is slow, close to absent – starting chest compressions 1, 2, 3, breathe, 1, 2, 3 breathe….  A blue, floppy, breathless baby.  We need some scissors and a feeding tube, some gauze, and adrenaline.  Get the intern to take over the breathing, the midwife to do chest compressions, cut the umbilical cord to try and thread a catheter in so we can try to speed up the heart with adrenaline, but failing miserably, blood and slime on my jacket as I wonder what on earth we are doing, this baby has no chance.  I call for a tracheal tube in desperation to see if we can put adrenaline directly in the baby’s lungs instead.

The baby is taking gasping, shuddering breaths, but not regularly breathing and is already 5 minutes old.  I put the tracheal tube in and as I get ready to put adrenaline in, we count the baby’s heart rate – it is over 100, we don’t need to continue compressions, we don’t need adrenaline.  Still pessimistic, we jog down the hall carrying the baby to the nursery, puffs of air through the tracheal tube the whole way.  I suggest that we reassess the baby in the nursery and see if we should stop doing what we are doing – are the pupils large and unresponsive, a sign of brain damage?  Will the baby start to have convulsions?  Have we resuscitated this baby’s heart – but resuscitated a shell of a person, whose brain will never function, an indescribable burden on a family that is already clinging to the edge of financial survival?

We put the little girl on the warmer in the nursery, and to my surprise, she’s breathing.  Regularly.  I am a little glad, but mostly worried.  Babies with brain damage can often breathe.  We get an IV, and I give her an anticonvulsant because I think she’s going to need it, and a caffeine-like stimulant because I don’t know if she’ll keep breathing on her own.  I have already decided that if she can’t breathe, we won’t put her in ICU on a ventilator – because if the brain is broken, a ventilator won’t fix it.

But breathe she does.  I pull out the tracheal tube, and she continues to breathe – in, out, in out.  Then we see her move her legs – one at a time, not in a spasmodic worrisome fashion, but intentionally.  And then the intern says – she’s opening her eyes.  And she does.  Deliberately, slowly, she opens her eyes, looks at the team, and then shuts them again, exhausted.

I arrive home at 4:30, awed.  What a holy privilege I have in this place.  I am so grateful to have been born in a country where medical school was one of many possibilities.  That despite my complete lack of passion for doctoring in high school, I was ushered into medical training because I couldn’t think of a better idea.  That the children’s hospital smelled better than geriatrics and the people were nicer, so I ended up in pediatrics.  That in pediatrics I was mentored and taught by people of passion.  And that after finding a career that I became passionate about, God broke my heart and clearly showed me – I’ve been guiding you on this path and have blessed you – and now, to whom much is given, much is required.  That He broke not only my heart, but the heart of my husband, so that the only thing we could do was come here to serve those He cares about far more than I can even imagine.

It is a holy privilege to be able to work here – to be able to not just help babies and children, but, I pray, to be a part of something bigger.  To be people of passion, mentoring and training the interns and nurses and clinical officers and administrators.  To be deeply dissatisfied with the status quo, to be unable to accept poverty and oppression.  To live and work together with God and our partners near and far to bring restoration and life.

Update:   I just came in to see the last baby, who has been named Peter.  He is looking around, breastfeeding, and moving around.  Except for his left arm, whose nerves have likely been bruised by stretching during his rough extraction, and should slowly recover function.  I told his mother that I had lost hope, and I didn’t think he’d make it, but everyone in the room was praying – and he is a miracle.  She started to cry.  I love that Jesus cares about this little boy even more than she does, and his mum is so grateful to be able to share his story with you. 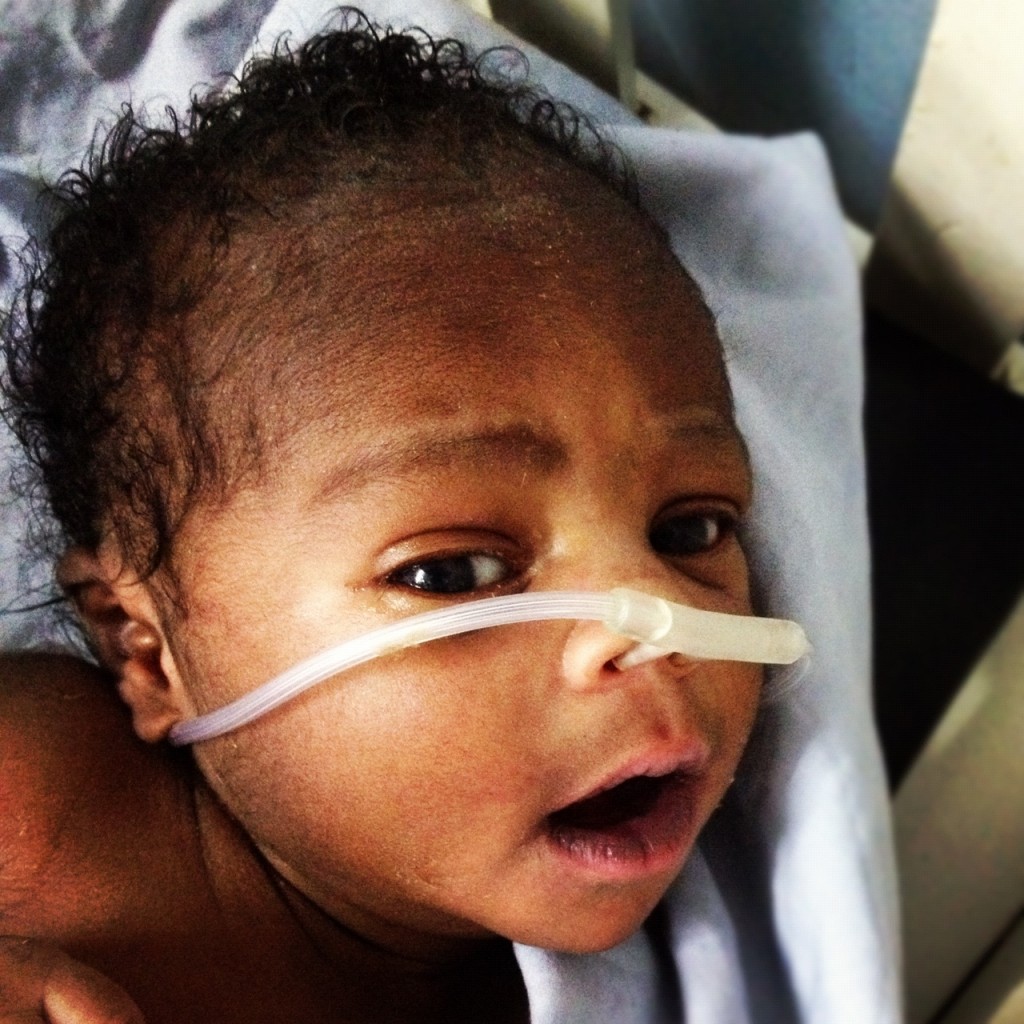 We have just started the final week in my Spiritual Formation class at Moffat where we bring it all together...after...