We’re in the final countdown before we leave for our short furlough in the States and Australia:  finishing and handing over projects and putting everything in “self-sustaining” mode until we return.

Administer Moffat final exam…check.  Finish Greek II assignments and take final exam…nearly check.  Handover project management of USAID grant…check.  Make final presentation to Kijabe board of elders on water situation…check.  Write journal article for Australian Institute of Project Management…check.  Facilitate one last planning retreat…check.  Negotiate MOU between Moffat and SIM…check.  Book speaking engagements in the States and Australia and develop presentations and talks…check.  Have final mentoring sessions…check.  Give our camera to a Moffat student (third child of the fourth wife in a plural marriage) who wants to start a small business taking photos so he can earn money to help his family…check.  Try not to let all this affect my baseline love and grace for others, especially my family…nearly check.

In the middle of this countdown, I have been finding delight (and tears) in a biography of Mother Teresa called Mother Teresa:  Come and Be My Light.  Much of her life I was already aware of–stories of how this amazing woman was completely abandoned to Jesus, suffered unbelievably for the sake of the poor and outcast in the slums of Calcutta, pioneered powerful works of the Lord and changed countless lives. 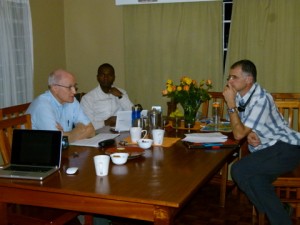 But I was unprepared for the letters the bio includes between her and her superior, the Catholic Archbishop of India (Perier), in the three years leading up to her receiving permission to leave her convent and establish the now-famous Missionaries of Charity in Calcutta.

In these letters, Mother Teresa recounts supernatural experiences where she heard Jesus repeatedly calling her to “come and be my light” to the outcast in the slums of Calcutta, and asking her if she was willing to give it all for Him.  Called “ecstatic” experiences in the Catholic parlance of the 1940’s, she had visions, heard the Lord speaking, and felt a tangible pain and terrible grief for the poor and suffering. 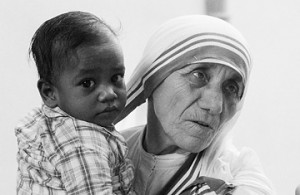 Mother Teresa, towards the end of her life

For her, leaving the relative safety of her European-style convent and starting a new missionary society in the slums wasn’t the fruit simply of a pragmatic analysis that there were no missionaries to the poorest of the poor (there weren’t), and as such she ought to consider it–no, she was moved primarily by a desire to respond to Jesus’ cry on the cross, “I thirst” (John 19:28) and desired to quench the thirst of Jesus by quenching the thirst of the poor in Calcutta.  It was a deeply supernatural, deeply personal call.

But here’s where it gets really interesting:  Archbishop Perier recognised that that her mystical experience were likely from the Lord, but he was concerned that she might be getting a bit too caught up in them.  Worried that if he set her loose too quickly her heart for the poor might sputter and die, in 1947 (after two years of her begging him to let her start a new society) he asked her to sit back, deliberately stop focussing on the visions, and do some intentional planning.  Before he would give her permission to start this new Missionaries of Charity endeavour, he needed answers to some explicit question:

It is not desired to have a long description of what you fancy you will be able to do. What we want is to know in a few words: the aim, the means, the rules, the recruitment, the possibilities of success. I do not say the glamour nor do I mean the humiliations, hardships, etc. but if we start something it must be able to achieve the object for which it is started—that’s what I call the success.

He asked her for planning details, in six categories:

1.  What do you want to do
2.  The means by which you desire to bring it about
3.  How you will form your disciples
4.  What kind of disciples/nuns you intend to recruit
5.  Where you intend to focus your work
6.  Whether it is a better idea to reach your goals through an existing organisation 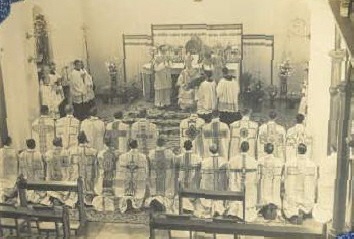 Archbishop Perier. He’s the one in the funny hat.

Mother Teresa’s reaction to this was in keeping with her deep humility and strength of character:  while she was taken aback, and felt strongly that “if these visions are from the Lord, there is no chance of failure“, she was completely obedient and took several months to think about these questions, and write down plans and strategies.

And in the correspondence between them in the years preceding and following her move to Calcutta, the fruit is apparent:  the supernatural experiences started her on the journey and sustained her in the hard times…but it was the considered plans and strategising that she had undertaken before she started the Missionaries of Charity which were a key factor in it being the successful, sustainable, worldwide endeavour it is today. 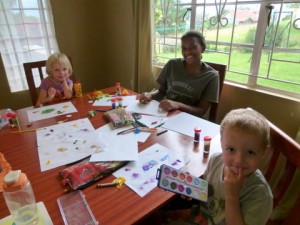 I  spend a lot of my time here in Kijabe working to improve project management practices, facilitating planning sessions and meeting, and writing plans and reports.  I don’t know why I enjoy it…I just do.  I have for a long time felt a burden that intentional planning is a critical factor in the success of endeavours, whether ministry-based or business-based, and that passion, vision, the leading of the Spirit, or good intentions alone are not enough.

I’ve always felt it takes both:  starting with the vision/passion, and then doing the hard work of planning and considering the “what” and the “how” of your vision.

My burden for this has increased dramatically since arriving in Africa almost two years ago…the African landscape is just littered with failed projects.  There are so many that successful, sustainable endeavours are considered the exception.  When asked the question, “Did you deliver what you said at the beginning you wanted to deliver?”, the answer is often “no”, with multiple caveats as to why this was the case.

I find the combined efforts of Mother Teresa and Archbishop Perier in the 1940s very interesting, and deeply moving.  It was in the combination, the nexus of the supernatural and the natural that Mother Teresa’s work grew to be so profoundly effective.

May this be so of our work amongst the poor and suffering here.  And may I be even 1/10 as obedient to the call of Jesus as Mother Teresa was.

It's Sunday morning and I'm almost exactly half way through my last weekend on-call for pediatrics.  Knowing this is the...