We’ve arrived back in the States a couple of weeks ago and it’s been a bit of a whirlwind, but a good one, since we arrived.  It’s been great to reconnect with friends, family, and partners. 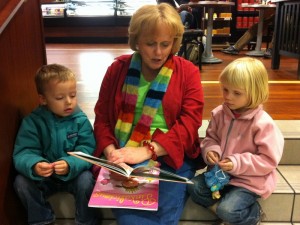 Reading with Nana in Boston

-Riley and Liam spending time with the ever-resourceful Nana in Boston–who organised a scavenger hunt for them in Barnes and Noble…with the participation of store management, no less
-Riley clinging to Papa Bill whenever he’s within arm’s reach, and her full conviction that if she wants it to snow, Papa Bill can make it happen (he has connections, you see)
-Spending some good time with Grand-Nana, who is finding it harder to hear and communicate but who is still a source of encouragement and spiritual strength to me
-Meeting the kind and lovely Beth, my father’s new wife, for the first time
-Pilgrimages to heavenly Robinette’s, the apple farm that has been a West Michigan donut and apple cider icon since 1911.
-Any and every moment spent with my sister, brother-in-law and their boys Will and Quinn
-Riley and Liam having a sleepover at Will and Quinn’s house and going to Krispy Kreme donuts for breakfast the next morning
-A few days with the inspiring Fiona and David in Cape Cod, another multi-cultural couple (British and Irish…a match only possible in heaven)
-Visiting (and rejoicing with) my aunt and uncle who narrowly survived a terrible car accident three weeks ago and are starting the long road to rehabilitation and recovery 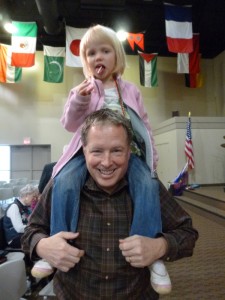 We get shoulder rides from Papa Bill and lollipops at this church!

We’ve also enjoyed starting to share personal stories with our partners of what their financial partnership has done for a child, a refugee, a future chaplain or pastor, or our rural community in Kijabe.

Having lived on three continents so far, we’re not unfamiliar with culture shock…and so we were prepared for a bit of re-entry turbulence.  It’s been mostly mild, but most of it has been humorous more than anything:

-Mardi wandering around Meijer in a daze before running out early because the size of the store was overwhelming
-My (Andy) not being comfortable driving at night or on the interstate, and feeling like a 70 year old man navigating Grand Rapids on backstreets to avoid four lane highways
-Staring in fascination as my cousin (the foodie wizard Mike McKay) made a frittata…and realising after a full minute that I was entranced because he was using white eggs without chicken poo and feathers stuck to them.  WHITE eggs!  What will they think of next?
-Checking out books at the library and having to ask the librarian for help 4 times because I couldn’t grasp the “automatic check-out system” (nerd factoid:  RFID chips in every book). 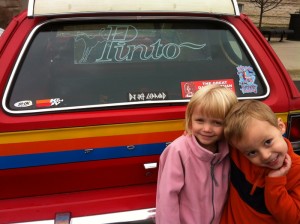 Because when you pass a Ford Pinto station wagon with a ‘DJ Def Lepard’ bumper sticker, anything less than a photo with the kids would be rude

In the 1960’s, my paternal grandfather transitioned to his third career…WWII test pilot to automotive engineer to church planter in Grand Rapids.  The church he planted is healthy and thriving today, and we spoke at both services yesterday.  It’s hard to put into words how much of a blessing it was to be with a church I have visited off and on for 37 years, and which felt like family the moment we walked through the doors. 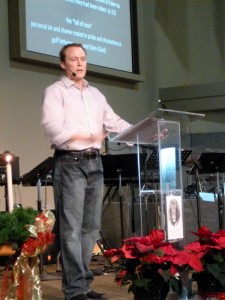 Preaching 48 hours after the most horrific mass murder in America’s history provided additional context to the talk we gave.  We spoke on the backstory to the hope, longing, and anticipation that is the season of Advent and the new Exodus that we are called to as followers of Jesus.  There were lots of tears…but it is a time for grief and lament in America. 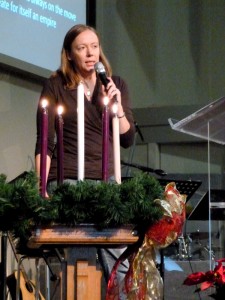 Mardi telling a story about a refugee.

We hold eight passports between the four of us (four of which are American), and so returning to the States is always a good feeling…but after our nearly two years in Kenya, coming back ‘home’ hasn’t feel quite like the homecoming it normally does.  You see, part of our hearts are in Kenya now. 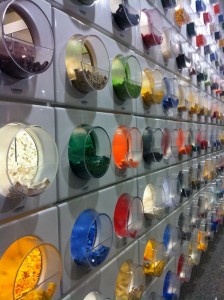 The Lego Store in Chicago…possibly the beginnings of the new heavens and new earth?

It is good to be back in the States, and it will be good to be back in Australia in February…but rather than coming ‘home’, I feel a bit like we’re visitors to someone else’s home.  I love that person, I am grateful for their hospitality and relationship and it is a delight to hear their stories and share some of ours…but I don’t want to overstay my welcome.  I look forward to returning to our work, our leaky home with the front door that doesn’t lock properly, and roads with potholes so large you could hide kids in them.

And I must say…going for a run without having to constantly look down at the road to avoid rocks or goats or fallen trees is mighty nice! 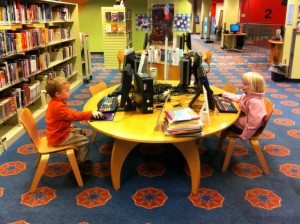 All in all, it’s good to be back for a visit.

Dr Leland Albright, adopted grandfather to Riley and Liam, and our pediatric neurosurgeon at Kijabe Hospital (in that order) is...