We were camping this weekend in our favorite family place to get away, a small national park near Lake Naivasha about an hour from Kijabe.  Accompanying us were good friends Mike and Ann and their two wonderful children, camping as a family for the first time.  It was my birthday weekend…expectations were high.

And a great weekend it started out as…no rain, kids happy, all enjoying ourselves including the first time campers (even with hyenas wandering around howling their weird cries throughout the night).  At one point we were pretty convinced (and appropriately congratulatory) that Mike had stared down a pair of leopards with his flashlight in their eyes…until we found out the following evening it was industrial lights on a far-off geothermal plant.

And then we heard about the attacks on Westgate Shopping Centre.  Many killed, terrorists believed to be hunkering down for the long haul.  It was surreal.  How could this be happening, at the place we visit almost weekly?  Westgate is an about an hour’s drive from Kijabe, and located on the northern (Kijabe) end of Nairobi.  I regularly have meetings at that Artcaffe, where the terrorists rolled a grenade in to clear a path for entry to the mall.  We buy groceries at that Nakumatt, a large buy-everything-you-need-in-one-trip sort of grocery store, where people are hiding in boxes to avoid being shot, and where the shooters are now apparently hunkered down.  It is one of the most common places our community does its grocery shopping.

After doing a headcount-by-distance and ensuring that all our doctors and SIM team members in Kijabe were accounted for (and thanking God that mobile phone service in Kenya is so good), the waiting began.  Somber discussions around a campfire, shock.  We decided to head home earlier than planned, on Sunday morning (Day 2), so Mardi could be nearby the Hospital if there was need for the Medical Director to do anything.  Both families felt a desire to just get back to Kijabe, so we could be together as a family unit in the home.

Upon return, we helped to arrange an evening of prayer for anyone in Kijabe who wanted to come…around a hundred came from Moffat Bible College, Kijabe Hospital, and CURE Hospital…doctors, students, teachers, nurses.  Together as a community, in shock and grief at what was taking place.  Prayers for the victims, the perpetrators, ourselves.  Reading scripture out loud, as a lament for the tragedy (Psalm 42) , in hope for the future (Psalm 27). 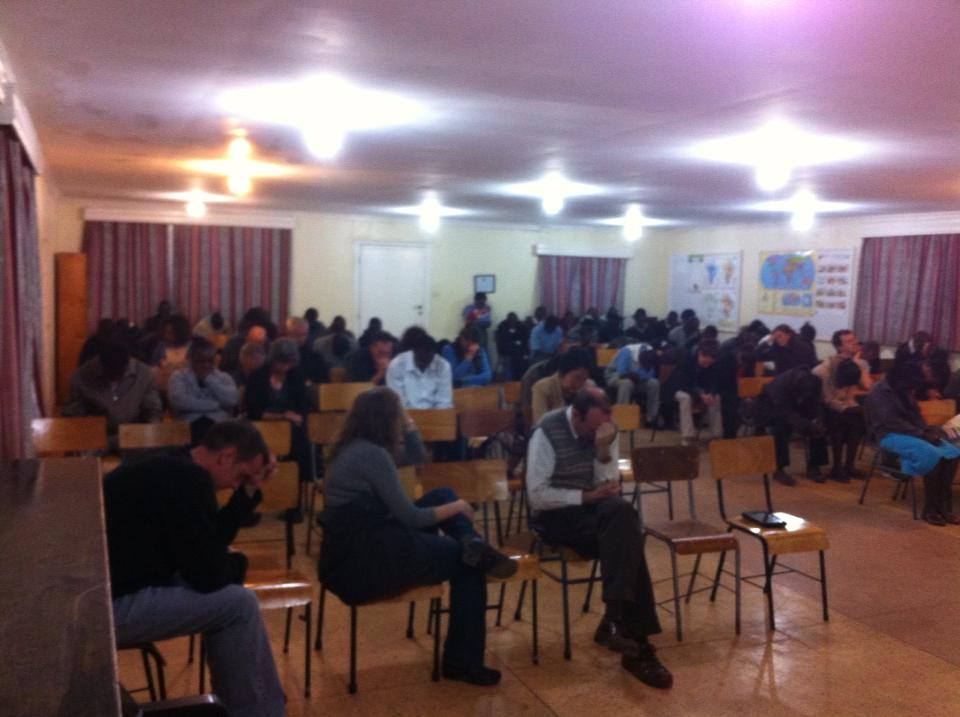 And then, more waiting.  Today (Day 3), in the midst of a full workload, arranging debriefing and information sessions for our SIM team in Kijabe to help them process the trauma.  Receiving reports from dear friends who lost friends in the shootings.  One, a friend who had flown in from the States to meet with another friend in Nairobi for business, received the news that he had died in Westgate while she was en route from Zimbabwe.  She cancelled her trip and returned to the US.  A co-worker at the Hospital had a family member who leapt off the roof to escape the shooting and injured her spine.  Our next door neighbour’s daughter was called by a friend from school (RVA) who was hiding in the mall, pinned down by gunfire, and didn’t know where his family was (both he and his family eventually escaped without physical harm).

Other stories brought wonder…no SIM worker in East Africa, and no Hospital employee was at Westgate when the shooting started, miraculously and very unusually for a Saturday morning.  Two families from RVA were in the mall, but managed to escape without injury.  One of our SIM Kijabe team members was en route to Westgate for a planned meeting, but the meeting was cancelled while she was en route and she turned around.  Another SIM team member from Kijabe was one block away from Westgate heading in when the shooting started, and she turned around when she received a text warning her away…she told me later that she had planned to be in Westgate an hour earlier, but she was delayed by a slow iPhone update.

Now, Day 3.  62 reported killed, with the death toll expected to rise.  Around 200 injured, but hundreds escaped with no injury.  Loud explosions and gunfire lead us to believe that the Kenyan special forces are in final assault mode.

I have been surprised by the depth of my emotional response to this event…a  friend of ours, a clinical psychologist with SIM here in Nairobi told me today that we all process traumatic incidents in different ways, but the common link for everyone affected by it is that we all have lost something.  Be it a life, or a friend or family member, or a sense of security and safety, the loss is real and we process it in different ways.  Today I have reflected on the grief I feel and realised that in addition to grieving for the victims, and grieving the environment of violence and evil in which the hatred of the attackers was nurtured, I am grieving the loss of my ‘safe place’.  You see, Westgate is where we go when we want to escape the busyness and intensity of cross-cultural work in Kijabe.  It was our safe place, our happy place.  We could watch a movie and get a burger, and even if the movie started 30 minutes late and the power went off twice, it was a movie theatre and it felt like home.  It was where Mardi and I try to go monthly for ‘date night’.

I feel like our safe place has been taken away from us.  This morning I reached for the toothpaste, bought at the Westgate Nakumatt a few weeks ago, and a photograph of blood on the floor of Nakumatt from the news that morning flashed before my eyes.  I cut a slice of bread, purchased at the Westgate Artcaffe last week, and a CCTV image of an attacker rolling a grenade into the crowded Artcaffe outdoor seating area popped into my head.

Like everything in life on this side of the resurrection, in everything and despite the intention of evil and the Enemy, God works for good…in addition to the massive sparing of life described above, the unity displayed by Kenyans has been hugely encouraging.  People of all tribes queueing up for hours to donate blood in major cities.  Volunteers walking past roadblocks to bring food, water, and tea to the security forces and journalists camped out on the Westgate perimeter.  Photos of these same volunteers fleeing when explosions went off, only to return later with more food and water.  Kenya’s politicians holding press conferences with their political opponents in a display of unity.  Religious leaders:  Protestant, Catholic, Orthodox, and Muslim gathering together to condemn the violence and the attacks.

The thing I was moved by most today was this, however: 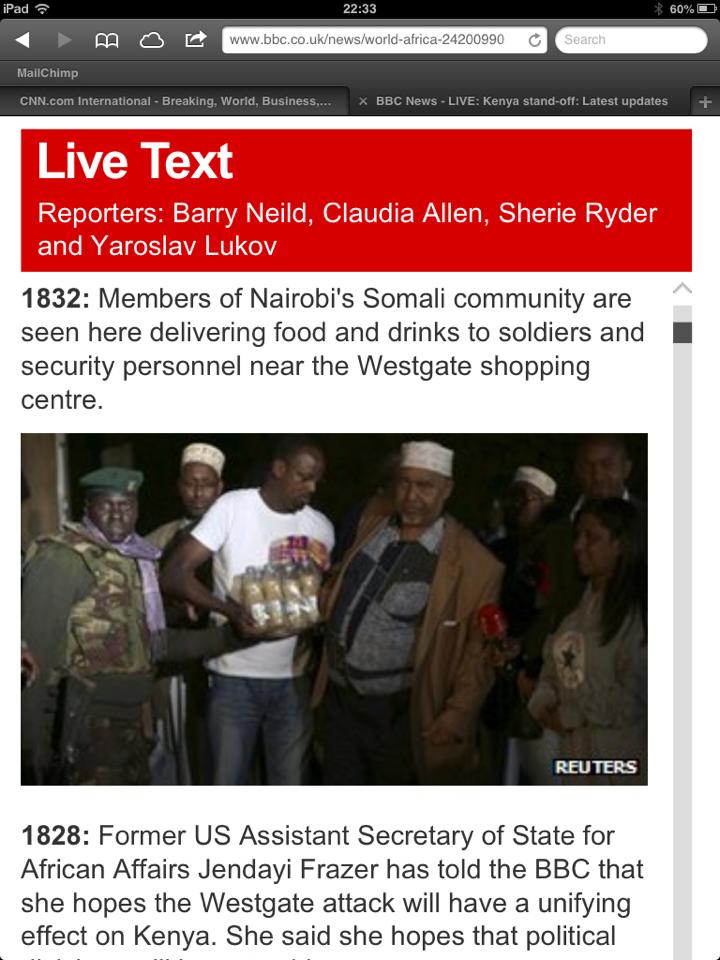 Members of the same ethnic community from which some of the attackers belong are responding to the tragedy not by hiding out of fear of retaliatory attacks, but by going and bringing food and drinks to soldiers around Westgate.  Not hiding out of fear, but heading into the war zone in a display of unity, generosity, and love.  You have to know a bit of the generational conflict that has existed between this ethnic group and Kenyans to know how unusual this is:  in the last few years, when this same terrorist group has rolled the odd grenade into a church or gunned down a few people at a bus stop, there are usually retaliatory attacks in rage against innocent members of the Somali community living within Kenya.

But not this time.  Not yet, anyway, and hopefully not ever.  This time, people are choosing peace over violence, unity over hatred.

There’s lots to grieve.  But there is also lots to be thankful for.  God is good.

The last 2 weeks have been exciting times in the Steere household - a fortnight of firsts. Here they are!...