What a week.  The Westgate siege ended six days ago, and the country (and we) have been recovering slowly. Three days of official mourning, communities grieving 69 killed, 175 physically wounded recovering, and thousands of others recovering from mental and emotional wounds.

And yet… life continues.  Mardi, week four of being Medical Director, spending her days managing the tension between strategic work and the usual day to day crises in a resource poor hospital – seeking repair options for a broken CT scanner, attempting to replace medical staff unexpectedly announcing their intentions to move to other jobs, trying to make progress on myriad issues at myriad meetings.  I was in the hospital ICU last night until 11pm with one of our SIM team members… he had been harvesting honey from a beehive  and was stung multiple times. He had a severe allergic reaction, and four doses of adrenaline later was finally out of the woods.  It was a very, very close call.

Oh, and my favorite.  Yesterday morning while jogging, I was bitten by a dog.  A group of three dogs enthusiastically guards a local herd of goats and sheep on one of my favorite trails, and this time one of them finally got me.  I’m pretty sure I saw him grinning as he ran away (they take their job very seriously, you see).  Just a nip on my calf, but for the rest of the run, every time a twig snapped or a stone rolled, I jumped involuntarily.

How are we doing?

Pretty good, considering.  We are grieving, filled with a deep sadness that is hard to express in words.  Thanks to our debrief with SIM’s trauma specialist, we’re recognising and processing our own individual responses… we both fought exhaustion all last week, and I found that images of the attacks wouldn’t leave my mind.  Mardi is reluctant to go into Nairobi. We fight the urge to not let the kids out of our sight.  At times, waves of emotions wash over me and I find myself in tears in the middle of buying groceries or eating lunch.  All normal responses to trauma, we are told, with their intensity already beginning to fade.

We’re not angry at, or more afraid of Muslims…it seems clear that these attacks were not about religion, despite the popular “Muslims vs Christians” media narrative. No, despite being rather half-heartedly whitewashed with Islam, they seem to have been about power.  The terrorists want Kenya out of Somalia, their former foothold from which they would create a worldwide caliphate/state, in which, (surprise!) they are in control.  I don’t have a clear answer as to ‘why’, but it seems likely to me that the reasons the Westgate terrorists killed derive from the same root causes from which Christians burned other Christians alive in the 16th century, Constantine killed in the name of Jesus, and John Calvin had Michael Servetus executed.  It’s about power, and maintaining at any cost the role of deciding who is ‘in’ and who is ‘out’, even if you have to kill to do it. 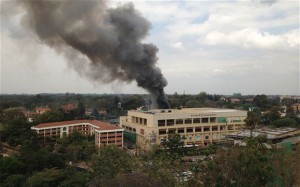 We have been deeply, profoundly moved by the outpouring of love and prayers that have come from friends and family back home.  Although we grieve with Kenya, we don’t feel confusion, nor are we wondering what God’s ‘purpose’ or ‘plan’ in all of this is.  We’re also not angry at God.  My heart breaks when I read, as I did this morning, the honest cry of people asking, ‘where was God at Westgate?’.  A friend said to me yesterday that he reckons the #1 reason people reject the possibility of a Creator or ‘higher power’ is because they can’t reconcile the suffering they see in the world with the concept of a good God.  I think he’s right.

We personally have found that the ‘blueprint’ worldview which many Christians hold becomes difficult to reconcile during times of suffering like this.  This worldview holds that if God is sovereign and powerful, then everything that happens in world history must therefore fit somehow into his sovereign plan.  It is a popular and traditional worldview, and is often expressed during times of suffering with phrases such as “The Lord works in mysterious ways”, or “God is in control”, or “There’s a purpose in everything”.  But when it comes to events like Westgate, how does one even begin to conceive of what a good God’s purpose was in children being shot?  Or what a loving God’s plan could be with the husband who was executed while shielding his pregnant wife from harm, just before she and her unborn child were also executed?  We respect that many people hold this worldview, just as we respect those who hold it, but we find that particularly in times like this, it doesn’t work for us.

No, we have come to believe that the price of love is free will – God, in his power, chose to create a world in which humans have the capacity to love him and each other… truly love, and this requires having the freedom to also choose to not love.  Free will, including the freedom to reject God and good things and harm others, including walking into a shopping mall and killing children.  Anything less than complete freedom of will means we don’t really have the freedom to love unconditionally and be free agents for good in this world.

It is our worldview that this free will extends not just to humans, but to spiritual beings as well…hence we take seriously the reality of a spiritual war going on around us, all the time, between Satan and his demonic forces and God and his angelic forces.  Under this worldview, called by some the ‘warfare’ worldview, horrifying, awful events like Westgate are not the result of some foreordained plan by a controlling being with a mysterious plan, but the result of choices by free agents who chose to do evil things in opposition to God’s plan.

You can find out more about the difference between a blueprint and a warfare worldview by reading this article by Dr Greg Boyd.

Where is God in Westgate, and what is his plan?  In my grief, I feel confidence and hope that it is the same as it is everywhere – God is good.  He has good in store for his creation, and longs for us to choose good over evil, to model the same self-sacrificing, other-centred, unconditional love that makes up the core of his being.  If you want to know what God is like, look at Jesus – Jesus is exactly like God, we are told in Hebrews 1:3.  If you want to know what God’s plan is, look at what Jesus spent his time doing:  Healing the sick, teaching about and modeling how beautiful life can be when we live God’s way (Jesus called this life in God’s “kingdom”), spending time with those whom the religious folk of his day thought were ‘sinners’, and giving his life for the sake of others – praying, with his last breath as they executed him, “Father, forgive them…they don’t know what they are doing.”  A life given for the sake of others… because God loves us unconditionally.  Without condition.

And, at Westgate, after free agents made their choices to do harm to others, God works overtime with us to bring good out of evil.  In all things…in all things…he works for good.

We find that holding a ‘warfare’ worldview gives us the freedom to grieve and lament well.   We are free to grieve and to know that God grieves with us, and is not off somewhere allowing awful things to happen because they fulfil a mysterious plan which will someday be made clear.  We are free to hate the evil, and to (try out best to) love the person.  When we are discouraged, we aren’t discouraged for long, because we acknowledge that we live in a war zone (some of us literally), and that in wars, there are always casualties, setbacks, and losses.  Even though a battle like Westgate may seem to have been won by the forces of evil, we know that the end is already on the way, and we put our hope in the outcome:  God wins, love wins in the end, and all things will be made new again.

Enough with the preaching.  It’s time to sleep.