Gastro…major decisions for Hospital staffing…making cars out of wood with the kids for Pinewood Derby…Andy asked to develop new curriculum…planning for many visitors in 2014…It’s been a great week–lots of glimpses of the holy amidst the everyday, with several major decisions made in preparation for 2014.  We are thankful that my (Andy’s) gastro this week responded to a course of Cipro…food and water in Kenya can be a bit of bacterial roulette at times.

I thought I’d tell the story of the last week in pictures…enjoy.  If you are reading this through our monthly email digest, you may need to click ‘display images’.  Some developments that we don’t have photos for (yet):  we’re going to have many visitors in 2014; it’s looking to be a bumper year.  First off the rank is Mardi’s parents at Christmas (hooray), then the Morgans from Florida (sans the wonderful Barbara, but she has a good excuse!), who will be joining us in our planned climb of Mt Kilimanjaro after Christmas, then a visiting team from Beaches Vineyard church in Atlantic Beach, Florida, and then a group including my Dad and several of his friends who will also be climbing Mt Kilimanjaro, to raise money for the Kijabe Hospital Needy Children’s Fund.  We’re looking forward to 2014! 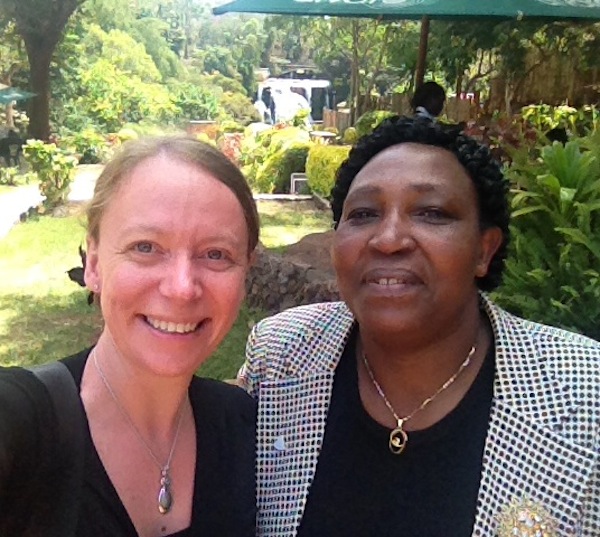 Mardi and Mary, the Executive Director of Kijabe Hospital during a visit this week to the new government health heads. Kijabe Hospital, while a non-governmental, not-for-profit mission hospital, plays an important role in Kenya’s overall health care strategy and so the Hospital works to maintain good relationships with the Ministry of Health, and vice versa.  This is one part of Mardi’s work as Medical Director–working to maintain relationships with stakeholders in the GoK (several of our training programs are done in partnership with the GoK), and to look for ways that Kijabe Hospital can encourage the GoK to provide for the poor and under-resourced in their health care delivery strategies. 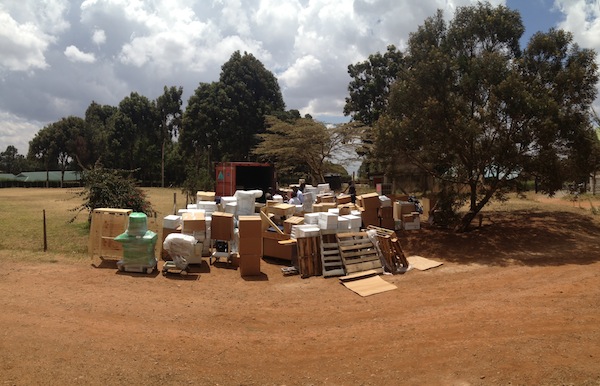 Christmas in October! This week, a full container’s worth of medical supplies arrived from Samaritan’s Purse. A massive donation of medical and surgical gear from donors around the world, collected and shipped by SP to Kijabe Hospital.  Mardi’s job?  To assist her Department Heads in inventory and making sure it goes where it’s supposed to! 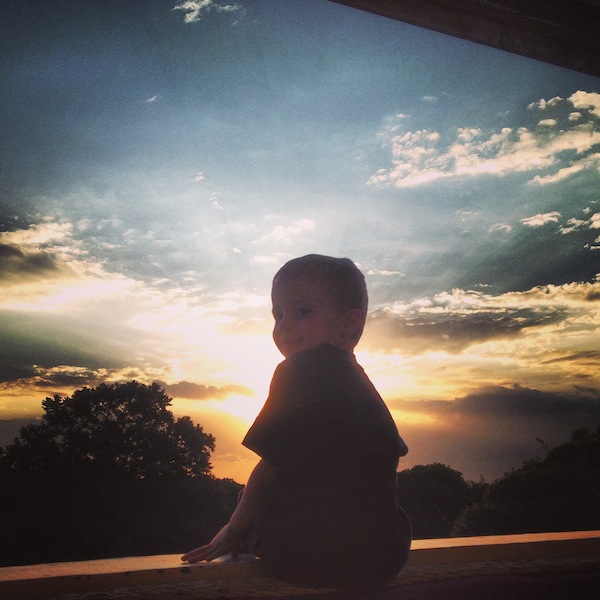 And….sunset on our front porch. With a little man. 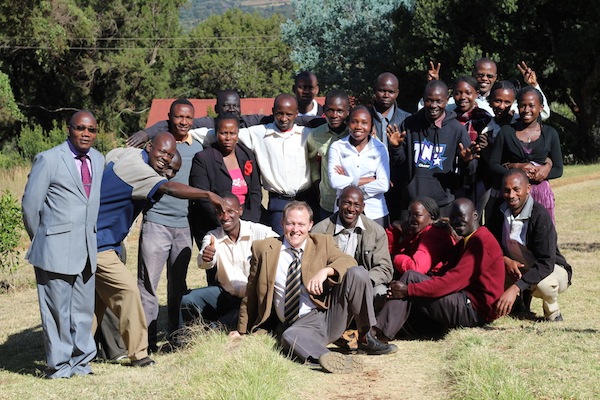 My spiritual formation class at Moffat…our heroes. This week has been a big one for setting the course for my future work in 2014; following teaching spiritual formation and leadership as separate classes these last two years, I proposed to Moffat this week the development of a new curriculum: “Spiritual Formation and Missional Leadership”, which would include a full year of classes and practicals in spiritual formation and missional leadership in an African context, followed by a year of ‘doing the stuff’–practicing mentoring, spiritual direction, and coaching in the lives of others. It was provisionally approved, and I’ve been asked to develop a full proposal and draft curriculum for approval. If fully approved, we’ll roll it out to our next student intake in July 2014. 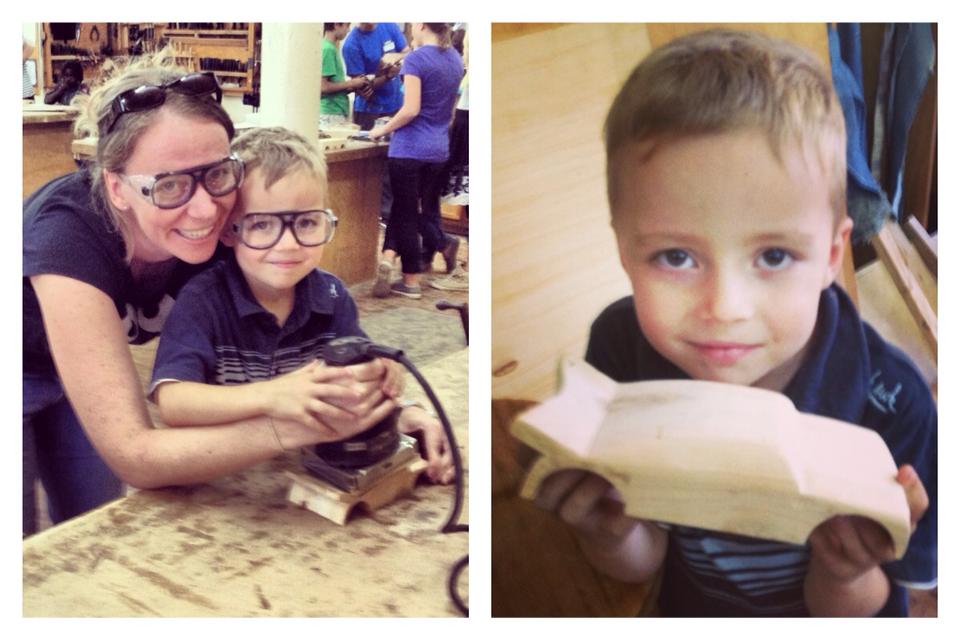 So…apparently there’s this whole phenomena around the world called ‘Pinewood Derby’, and it involves children making little wooden cars to race down a track. It’s an annual event at our kids’ school, and so Mardi and I have had to have crash courses in using band saws, coping saws, routers, and sanders at the RVA wood shop. It’s been such a great bonding time with the kids, and we’re having a ball. 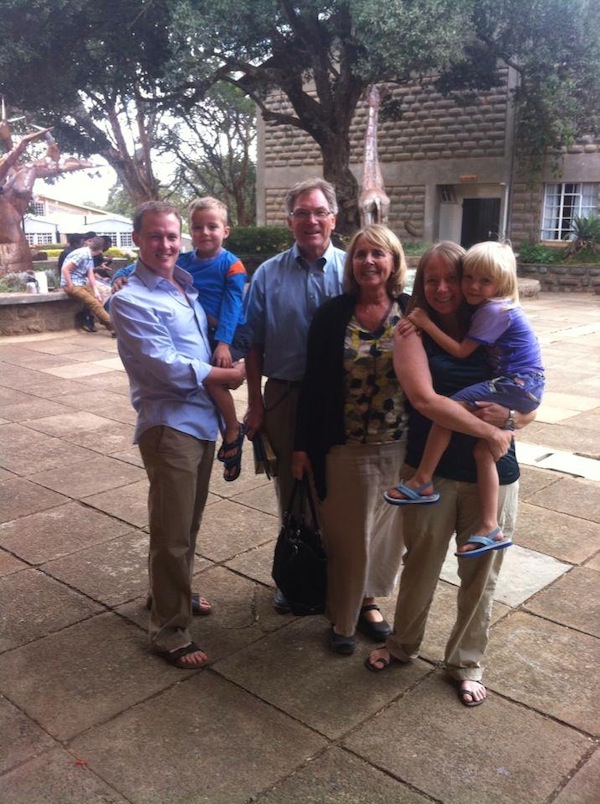 We had a visit over the weekend from the wonderful John and Lynn Axelson of Jackson, Michigan–full of mutual encouragement.  They return in Jan for their 5th stint as relief docs-two months on the adult wards. This place feels at times like a Grand Central Station of people called to serve the least and lost, and it is so cool to see the disruptive hand of the Lord at work in people of all seasons and stages of life. 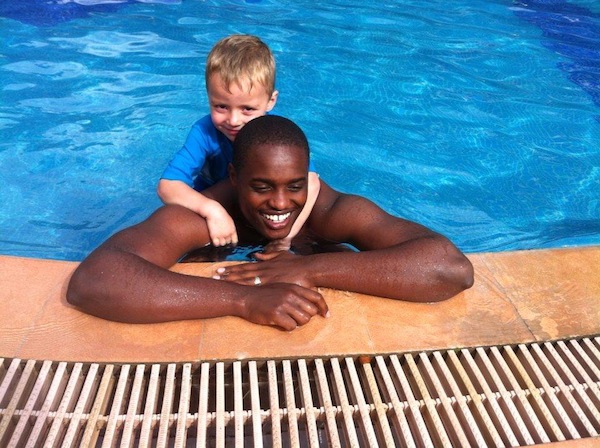 We found a pool in Kenya! So proud of Liam for getting over his sobs and fear of water, and starting swimming lessons with the outstandingly patient Mr Harrison. Well done, Liam…we are thankful for tourist resorts that don’t charge much for us locals to use their pool, so that our children can learn to stop sinking like rocks in water. 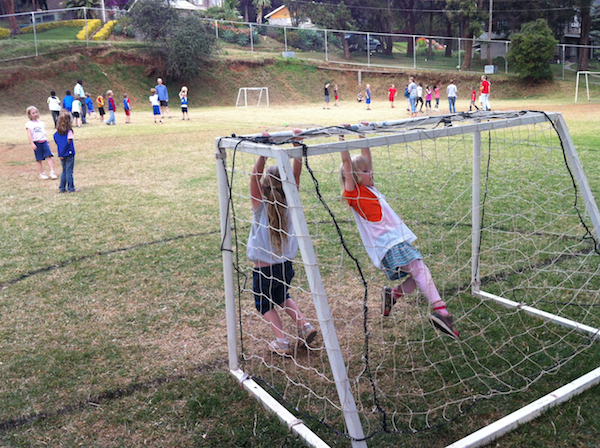 Riley and her friend Ella, demonstrating outstanding goalie awareness during a soccer game this week. Or was it foosball?