We had a good Christmas here in Kijabe…Visiting docs and friends joining us to celebrate, Mardi’s parents here from Australia, and a slight cooling down in the weather that reminded me of Michigan Christmases past:  memories of white Christmases, crisp and freezing air, and muffled footfalls in the snow during the traditional Christmas eve run with my brother in law. 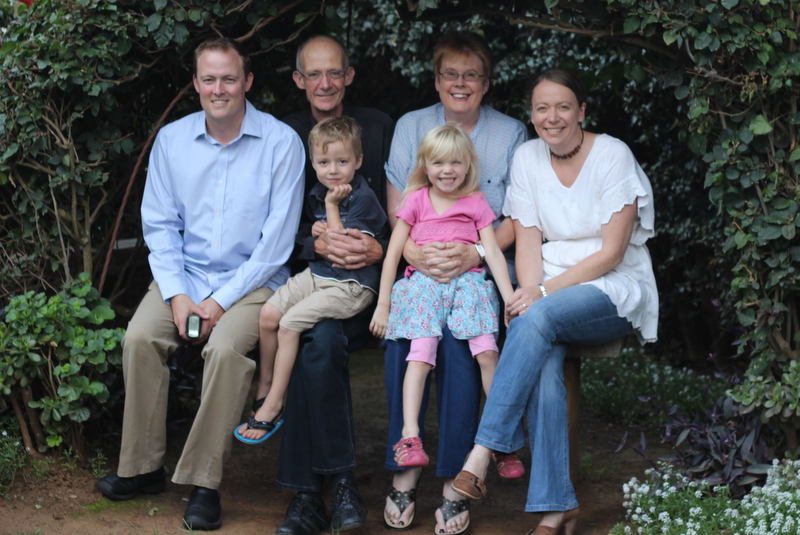 Christmas morning began with a tradition started by Mardi’s folks a few years ago:  giving the children in the ward souvenir koalas with little Aussie flags.  I’m pretty sure the kids had no idea what the little furry bear creatures were with the flags that look vaguely British, but they and the mothers loved them. 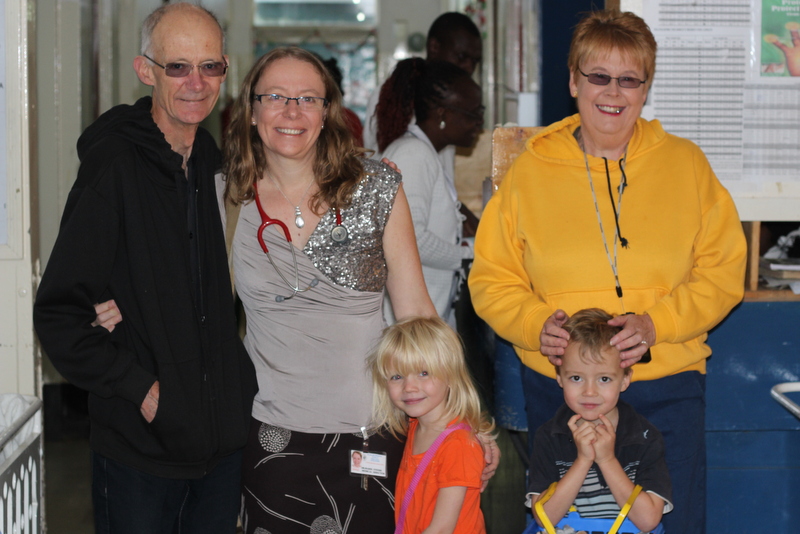 Joining Mardi on the wards for koala gifting 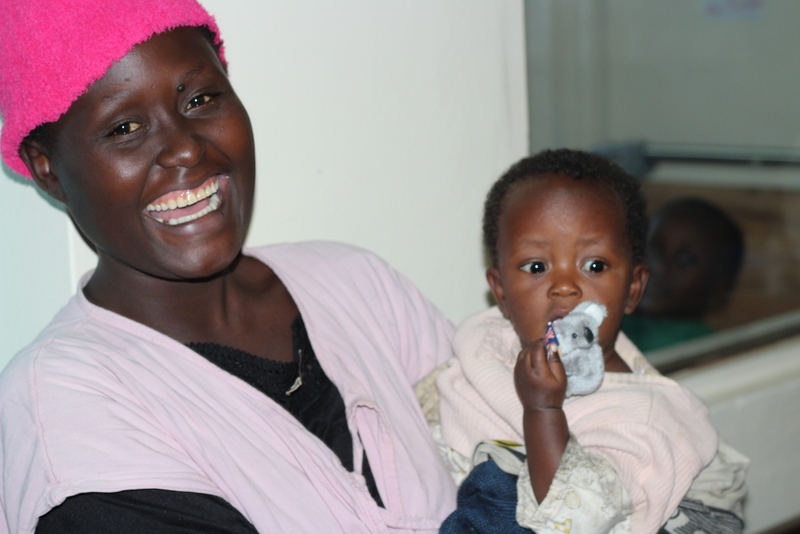 A Christmas elf with his basket of koalas 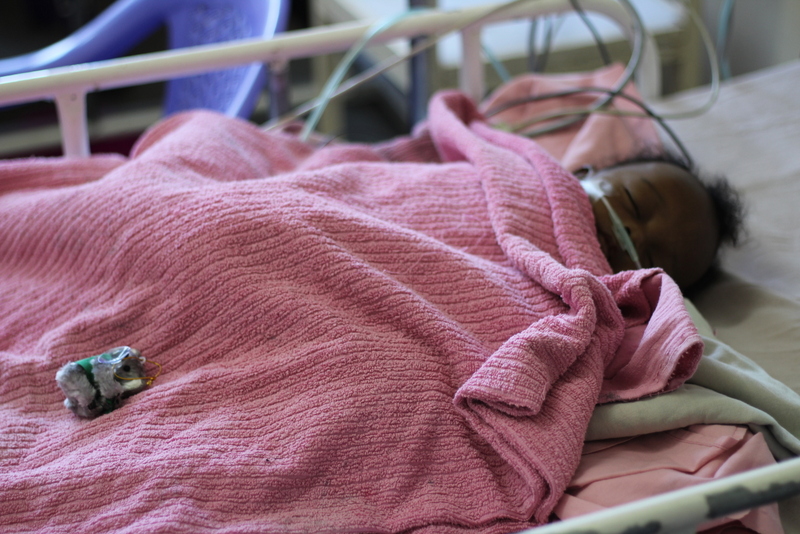 Like many doctors, nurses, and military folk around the world, Mardi was on call this Christmas. For her, Christmas was a day of dealing with overcrowded conditions in the nursery (remnants of the recently-ended health care strike) and some particularly difficult and heartbreaking cases.

Christmas morning:  a very sick child with rabies succumbed despite the efforts of Mardi and the team.  All day:  spent most of it at the Hospital, popping back home for part of the meal.  Christmas night:  happened to be up in the ICU checking on a pediatric patient when an adult in the next bed stopped breathing.  After a few minutes of CPR, Mardi was relieved by the GP on call and they made a decision to not attempt resuscitation further. Then back to the Hospital for 5 hours at 2am attempting to exchange a baby’s jaundiced blood for healthy blood…without success.

It was a difficult day for Mardi. 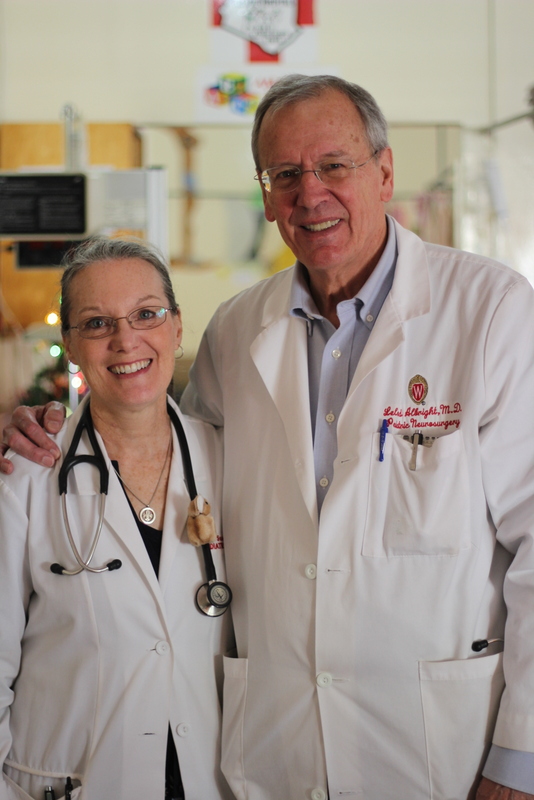 Leland and Susan, rounding on Christmas day on their neurosurgical patients, with Susan displaying her newly-acquired koala on her stethoscope. Leland read Riley’s MRI a few weeks ago and has been an enormous blessing to us.

After we returned from being koala Santa, time to prepare for Christmas lunch with 22 friends…we started out with ten, but the list kept growing as we encountered people who were planning to spend it alone.  Mardi’s mum was the hero of the day, pulling much of it together, and we sat down to a Christmas lunch with blended traditions. 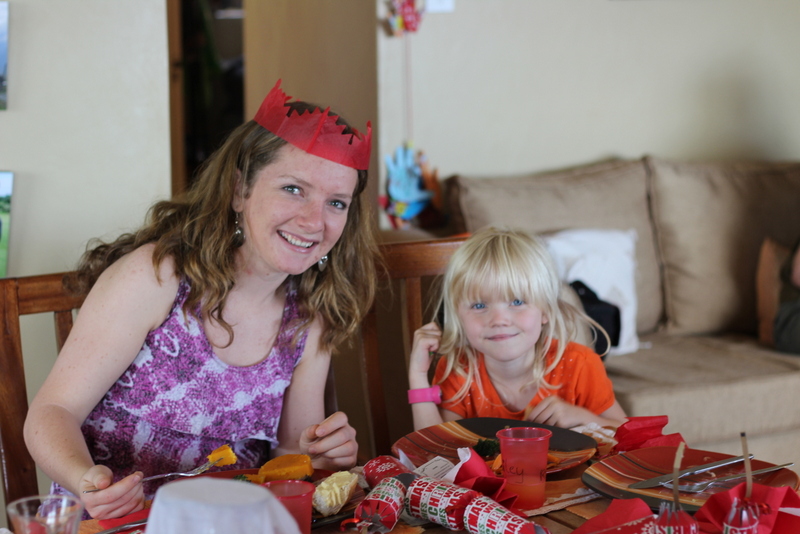 Riley with RVA “Big Sister” Hanna Joy, back from Germany for two weeks 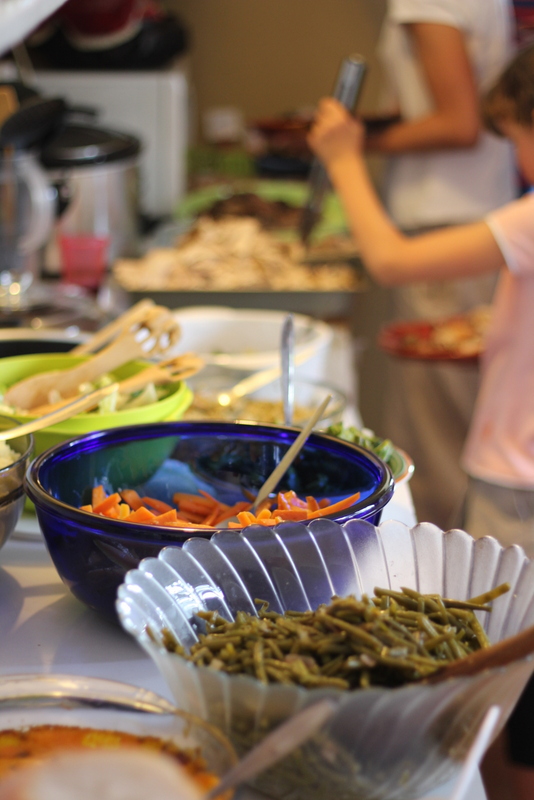 Gazing around our motley group which represented five countries (including one nurse who had been evacuated from South Sudan 24 hours earlier), with Mardi at work experiencing multiple deaths was quite a centering moment for me:  in the midst of new and old friends, chaos, and a grieving wife I was also filled with peace and joy.  THIS is Christmas.  Celebration and joy in the midst of real life, giving appropriate context and hope to the times of suffering and grief we inevitably experience in life on this side of Jesus’ return. 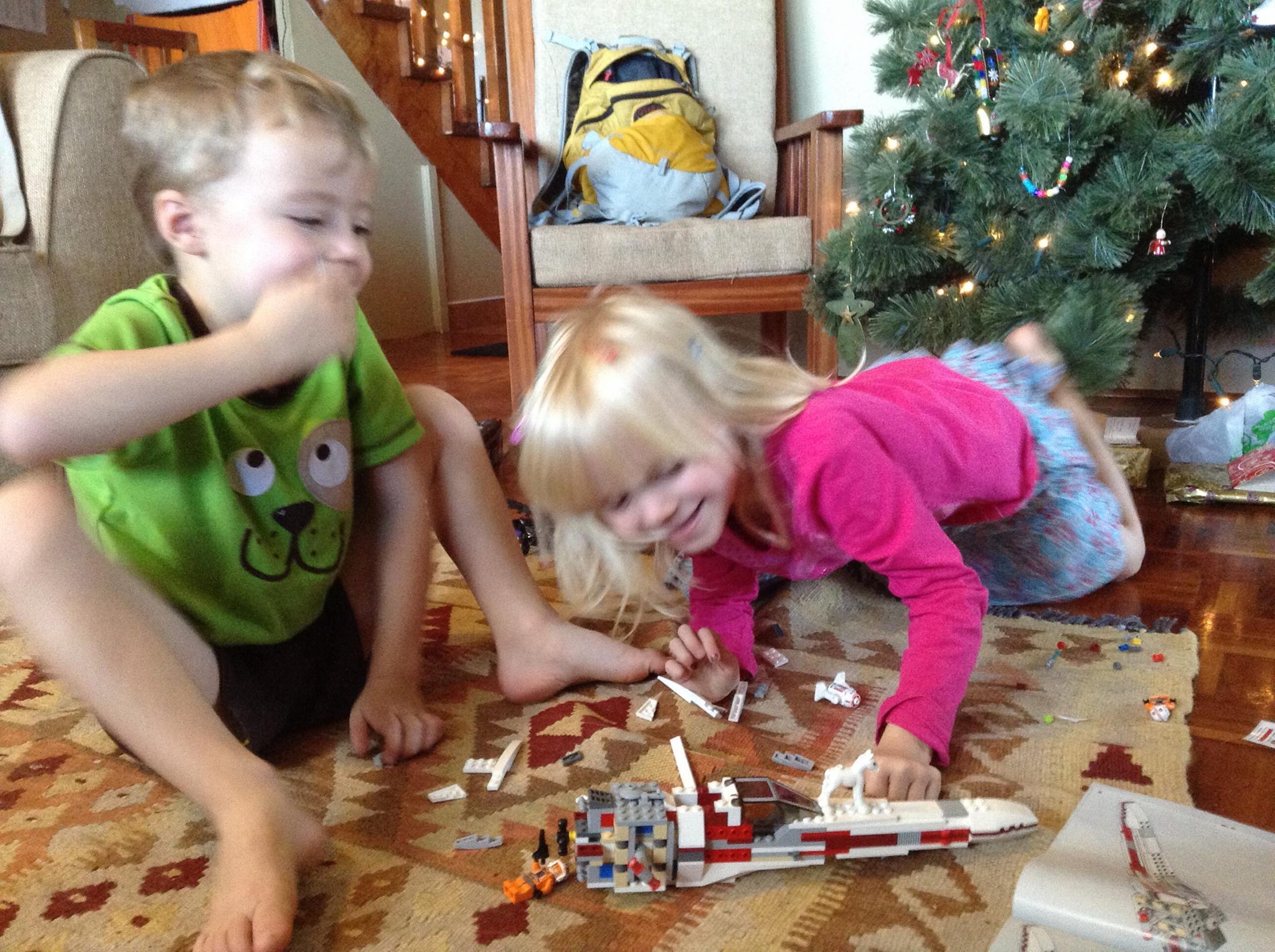 While we’re on the subject of medical-cases-you-only-encounter-in-the-developing-world, today Mardi was called in to help with a C-section birth.  Have a look: 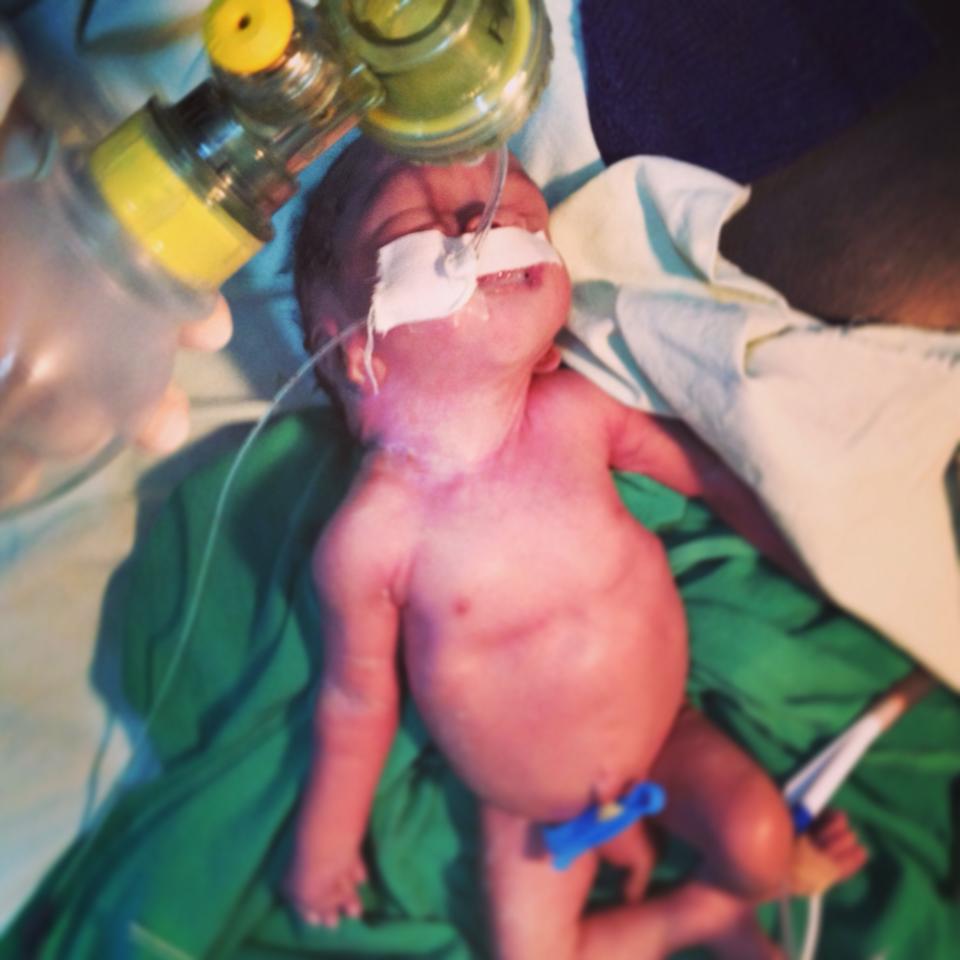 Surprise! When a baby isn’t growing well and you do a c-section, sometimes it turns out the baby was growing outside the uterus, amongst the bowels and kidneys… his oxygen levels were horrible so we sent him for an emergency heart scan, which is normal, and he’s on his way back to us now. Pray that the lungs of this miraculous little boy will figure out breathing well.

Mardi and I are off in two days to climb Mt Kilimanjaro with some dear friends from the Beaches Vineyard in Florida…a trip we’ve been planning for five years, the timing of it all seems a bit surreal, but it is the only time we have and we can’t wait to spend some time with these friends.  On a mountain. We return 8 January, hopefully having made it to the summit.

It's Christmas Eve day...and while the last six weeks have been filled with unexpected turns and roundabouts, many little rays...