Thanks to the generosity of friends, family, and several years of saving, Mardi and I fulfilled a sixteen-year dream last week:  a successful 8 day ascent of Mt Kilimanjaro.  I’ve been dreaming of “Kili” since I first read Michael Crichton’s autobiography Travels in 1997, and have been gazing south across the border with longing since we first arrived in Kenya.

We were joined by good friends from the States:  trekking buddies Jeremy and Claire, who joined us for part of our walk across England in 2005, and Tony, whose wife was lucky enough to give birth to a beautiful boy a few months ago and had a reasonable excuse to stay home. 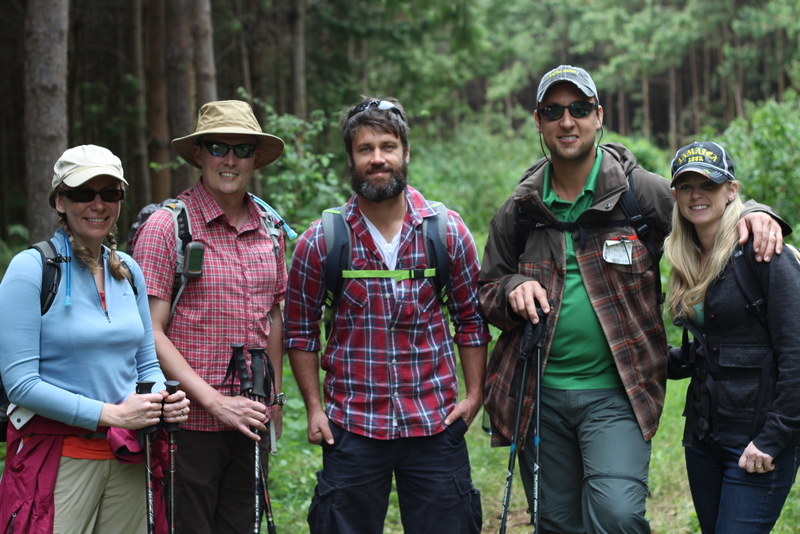 We read a lot about Kili before we went:  tallest mountain in Africa at 19,341 feet/5895 metres.  The highest free-standing mountain in the world and the fourth highest of the Seven Summits.  Top covered by two square kilometers of glacier.  It’s not a challenging climb–requires only trekking (no ropes) to reach the summit.  It’s a very challenging climb–10 to 15 people die attempting to summit (more than on Mt Everest) each year.  A naturalist’s dream:  because it rises more than 16,000 feet from base to summit, you experience almost every kind of ecological system on the planet during the trek.  Only 40% of climbers reach the summit, and all who do experience mild to severe altitude sickness.  It has the same vertical ascent as Mt Everest and Denali, the #1 and #3 highest of the Seven Summits.

I can confirm it was very difficult.

It was also one of the most beautiful and moving experiences I have ever had.  To fulfill this dream in the midst of a difficult season of medical issues and challenging work felt a bit surreal, but it was such a gift.  I’d lost 25 pounds in 5 weeks due to amoebic dysentery, and to even have the strength to walk was a gift.  To be able to walk amidst breath-taking beauty and grandeur moved me to tears several times.

On summit night, during a 20 hour period in which we trekked 10 miles, climbed 4,000 feet, and descended 6,500 feet, it struck me that climbing Kili is a lot like normal, everyday life.  Here’s a few ways. 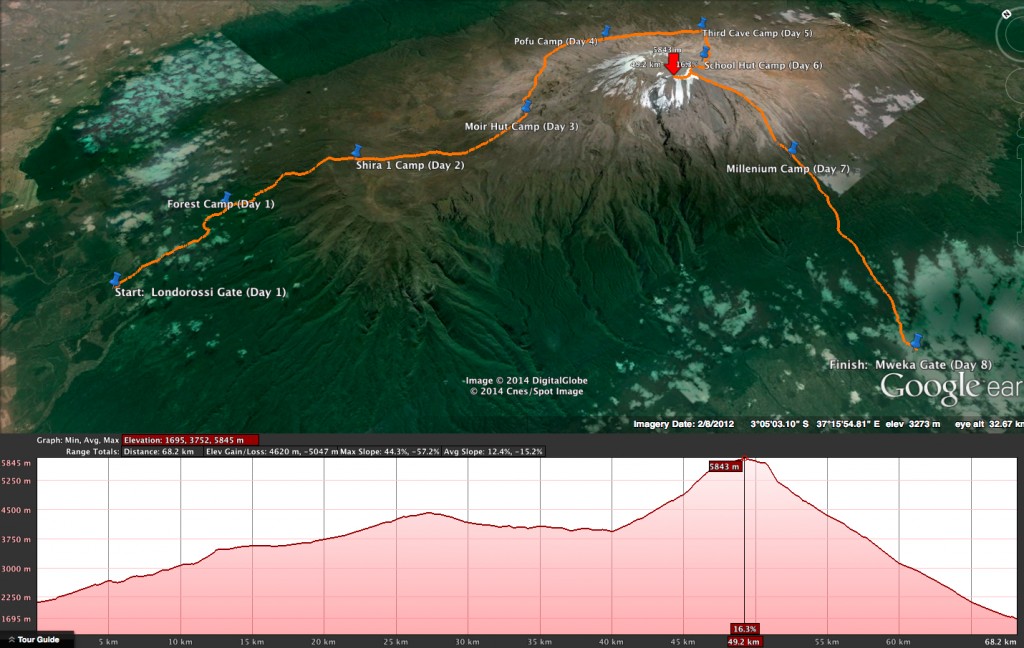 1.  Even with a lot of planning, things can go terribly wrong.

We planned our climb for about three years:  poring over maps, selecting optimal routes for a balance between altitude acclimatization, solitude, and natural beauty.  Investigating trekking companies (due to the risk of injury and death, the Tanzania park service won’t allow climbs without engaging a professional guide) and reading numerous guidebooks.  Liaising with the grandparents to arrange fly-in-fly-out babysitting services from Australia.  Selecting a climb window for 2012, only to delay it a year.

Within 24 hours, Jeremy contracted a stomach bug.  On day 1, as we climbed through temperate rainforest to our first camp, he was already experiencing nausea and dehydration.  Over the next few days, as we began to climb higher and higher, passing 12,000 feet, we all began to experience mild symptoms of altitude sickness, but Jeremy began to experience them severely.  Whether he had regular pneumonia or pulmonary edema (a filling of the lungs with fluid due to high altitude) is hard to say, but by day 5, he was only capable of a slow shuffling walk, stopping every ten or so steps to rest on a rock or sit down.  He had full-on vomiting, was unable to keep anything down, and the Diamox (medication to combat the effects of altitude sickness) is also a diuretic, so he woke up every 45 minutes during the night to vomit or use the toilet.   Despite this, he was unbelievably cheerful:  arriving in camp after a day of shuffle-stop-vomit-shuffle-stop-rest with a cheerful smile, but so exhausted he couldn’t speak or eat. 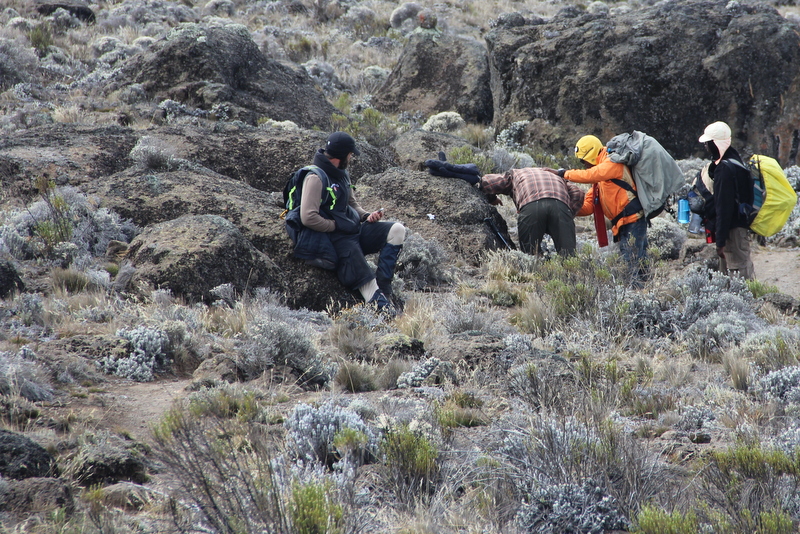 A vomit stop.  J being comforted by our guides.

We hoped and prayed he would take a turn for the better, by day 5 it was clear that it wasn’t going to happen.  We were about to make our push for the summit, and were beginning to be seriously concerned about his health.  While the rest of us were walking to our final camp before summit night, our guide made the (right) decision to evacuate him off the mountain. 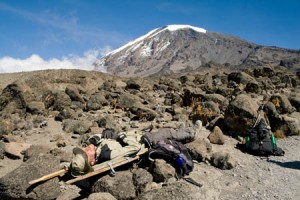 A stretcher similar to Jeremy’s. His had a wheel at the middle of the stretcher to help move it along–on the unlikely chance you are being evacuated a flat grassy plain and not a mountain.

Thus began an epic journey; almost a better tale than our summiting adventure.  It took six strong porters more than thirteen hours to move him on a stretcher from 13,000 feet back to Arusha, a journey done mostly in darkness and without mobile phone reception.  It involved emergency oxygen, and everyone’s efforts to prevent Jeremy from going to sleep.  Jeremy’s memories of the evacuation are hazy, but he remembers waking up from time to time when a porter would cry out and fall in the darkness, having wrenched their knee or sprained their ankle on a rock, and the whole stretcher would spill over.  The porter would wrap his injured joint in a bandage, get up and go on.

The rest of us made the summit, thankfully, but Jeremy’s unplanned severe illness and Drama-In-Real-Life Reader’s Digest evacuation story had us worried and praying until day 8, when we arrived at the gate and he met us there, still unsteady on his feet but smiling to be at a lower elevation. 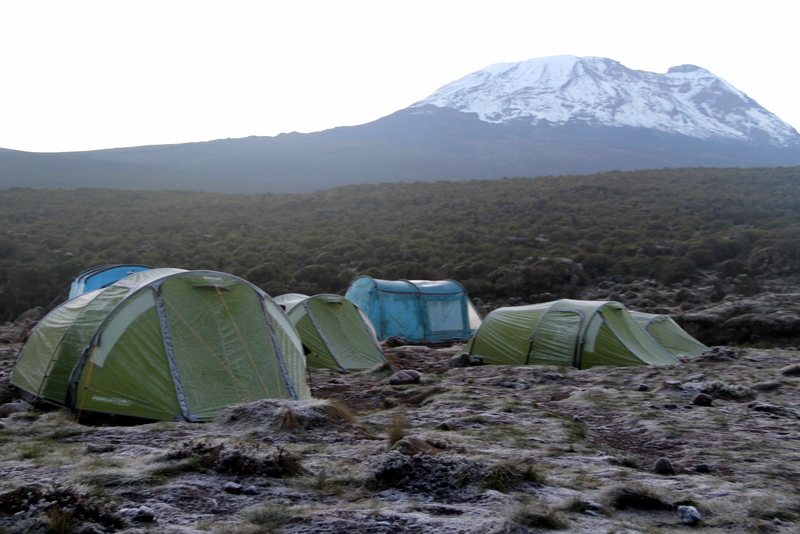 2.  When you can’t see more than one step ahead, you have to trust your guide.

We started our final push to the summit at 1130pm on day 6, starting the seven hour ascent of the sheer southeastern edge of Kili in the pitch blackness.  Each of us had on a headlamp, which cast a narrow beam of light of around 4 feet diameter, centered wherever we swiveled our head–which, on the steep edge of Kili at 17,000 feet, was right down at our feet. 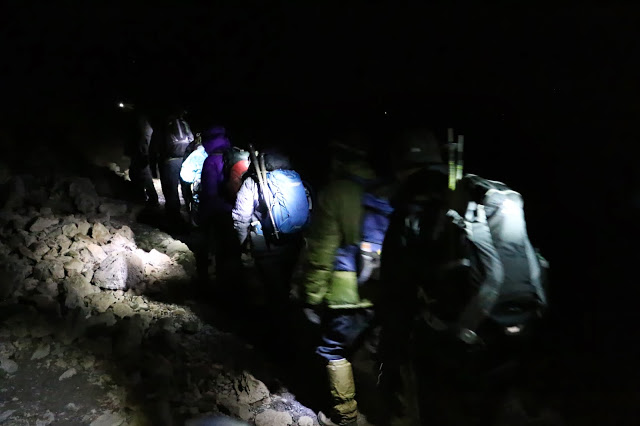 When you are looking down at your feet, the path is fairly well illuminated–you can see where your feet are, and where the next step is.  But beyond this narrow circle of light is darkness..you have to take another step in order to see where the next step will be.  Due to the many switchbacks, rocky cliffs, and boulders, you don’t know if the step after the next will be up, down, right or left.

And as I wound my way around boulders and up sheer cliffs with the help of our guides, I was struck by how similar this experience was to how Mardi and I have been led by Jesus in recent years.  Having a passion or calling towards a certain goal, but having no real idea of how to get there.  Putting one foot in front of the other, with our only clarity being where we were currently, and what the next step was…but not the step after that.  Taking the next step, in faith that as we were moving ahead, the Lord would make the step after that clear.  Not being dismayed by twists and turns or switchbacks, but trusting that our Guide would get us there in the end, and that He could be trusted to lead us along good paths. 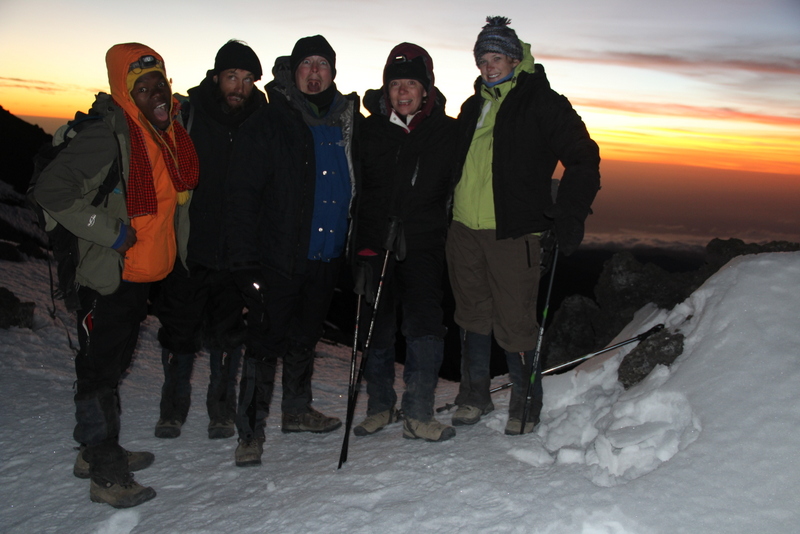 3.  Not being able to see what lies ahead prevents you from worrying about how difficult it will be to get there.

It was pitch black on summit night.  This is what it looked like to stop and look up or down the mountain: 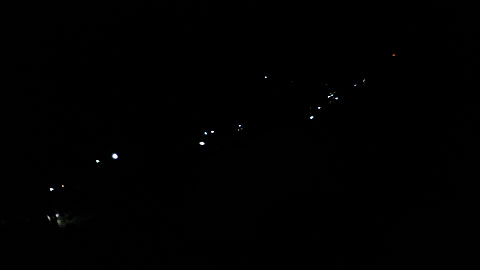 headlamps of other hikers above us

Summit night is a 4,000 foot climb at high elevation:  it’s not like climbing 4,000 feet from sea level.  At 15,000 feet (our starting elevation for the summit push) you already feel dizzy, exhausted if you move too quickly, and gasp for breath if you don’t breathe fast enough due to the lack of oxygen.  I woke up at night several times with a panicked gasping for air.  So to continue to ascend, you move very slowly to conserve energy, keep your breathing normal, and take small, shuffling steps.

As you go higher, the effects of high altitude vary with each person:  Mardi began to experience vomiting and severe nausea.  Tony, the bullishly strong one among us, got very weak and a guide had to help carry his pack.  Claire was exhausted, and had to rest several times–she didn’t speak once in seven hours that I recall.  I, inexplicably, felt OK, and was told later that I was ‘annoyingly cheerful’.  It wasn’t until we were near the summit (where the others got their second winds) that I ‘bonked’ and nearly didn’t make it all the way.

During the entire seven hour night climb, you can’t see more than your headlamp will show.  If you look up, you see small dots of light above you…ascending climbers, snaking along switchbacks above.  For seven hours, as you look up, hoping to see how far there is left to go, all you see are the headlamps of climbers above you.  You never once see the crater rim (the point at which you cease ascending steeply and begin the final 2 hour gentle walk around the dormant volcano crater of Kili to reach the summit, Uhuru Peak).  It’s not until you pull yourself up the final step, dizzy and exhausted and telling yourself “I can’t go any further”, that you realise you are at the crater rim, and the climb is almost over. 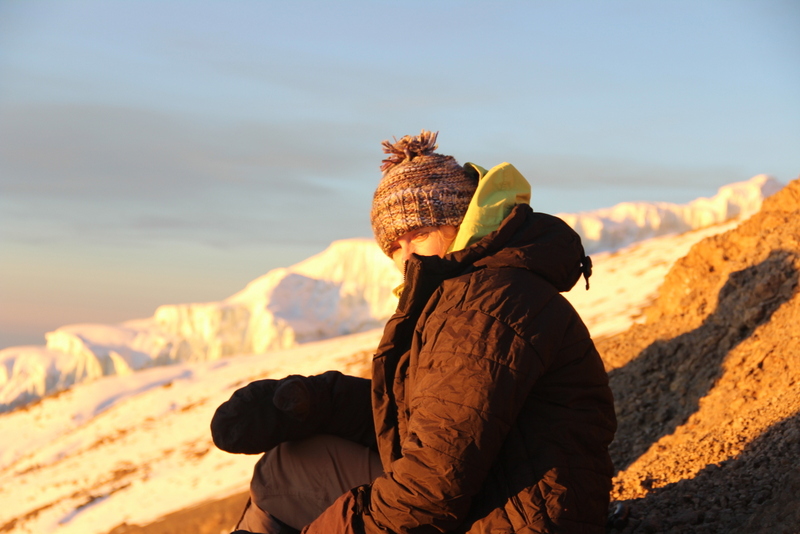 Claire, after reaching the crater rim, being recharged by the sunrise before the final push to the summit.

If we had been able to see how far above us the crater rim was during the night ascent, I believe that all of us would have turned back at some point before reaching the top.  It was just too difficult, and to continue climbing while being able to see how many thousands of feet and footsteps remained would have required a mental strength that none of us had at that point.

I am moved by this thought, as I compare it to our lives…I wonder, if Mardi and I had been given a ten point, three year plan in 2010 as we were considering whether or not to move to Kijabe, which described in detail what we would experience in transitioning to a life of cross-cultural work in Africa–grief and joy, loss and fulfillment, suffering and joy–if we would have decided to come?  I am grateful, in hindsight, that the Lord made clear to us only one thing in those early days:  that His heart breaks for the suffering and He wanted our hearts to break also.  Exactly how He wanted us to respond to this call was never made crystal clear via a ten point plan…only our next step was illuminated, for us to decide to take in faith or not.

Amidst the uncertainty and tenuous nature of life on this planet, I am grateful that I don’t often know what lies beyond my next few steps…I think particularly at times when I’m physically tired or have lost my bearings due to mental or emotional exhaustion, it helps to just continue to take the next steps in front of me, trusting that the Lord will show me which direction to head next. 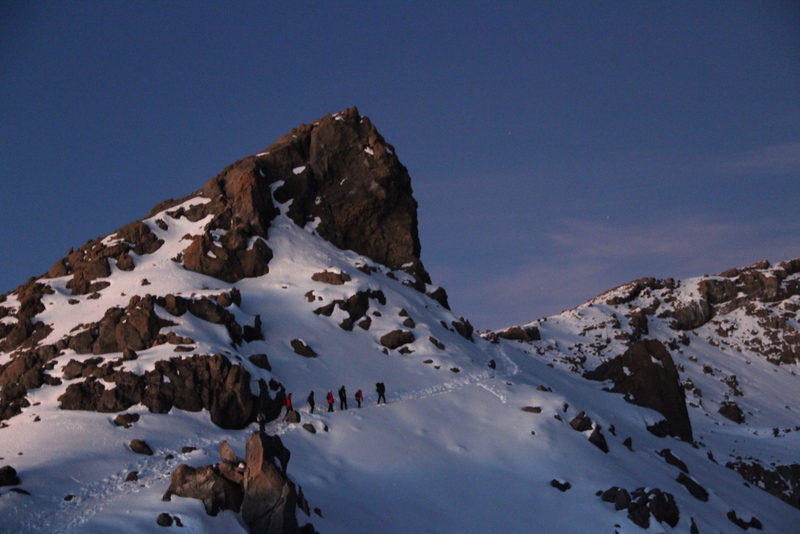 Walking around the crater rim to the summit, in the pre-dawn light

We had a good Christmas here in Kijabe...Visiting docs and friends joining us to celebrate, Mardi's parents here from Australia,...