It’s been a week…yep, definitely a week.  I find it difficult to find the right adjective; there are just too many.  Exhilarating, difficult, fulfilling, busy, moving, encouraging.  So…here are some pictures to tell the story that I can’t find words for.

We’re in the Commissioning Phase of the Water Project…filling the tank with water, conducting a hydrostatic test for leaks, checking for settlement, and then bringing it ‘on line’…connecting each of the Hospital water supply headers to the new tank, filling them slowly, and increasing pressure gradually while we check for leaks. 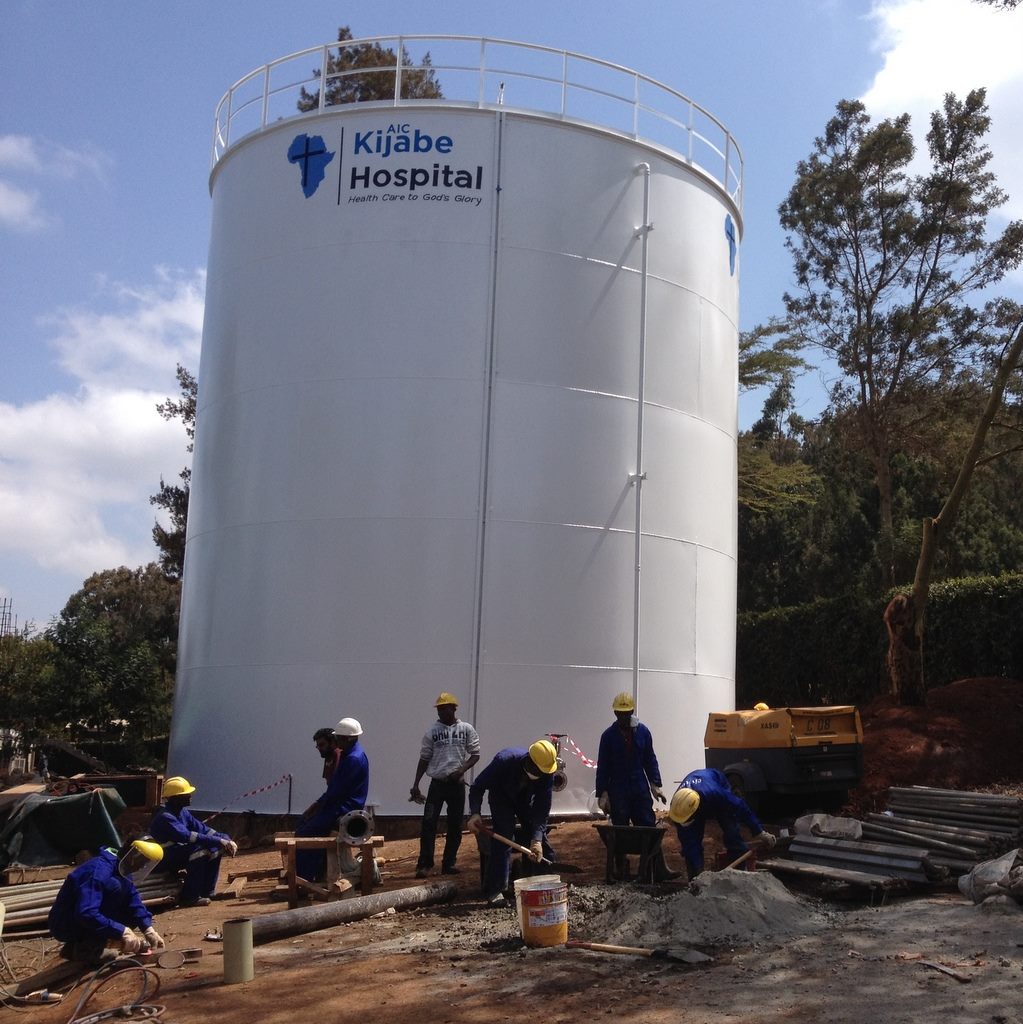 Filling the tank (Monday)…After a delay of one day due to a large monkey electrocuting himself on the power lines to the water pump and shorting out the transformer, we’re finally starting the initial fill.  The little blue triangle at the top center of tank moves down as the tank fills. We check every few hours for settlement and leaks. So far so good. 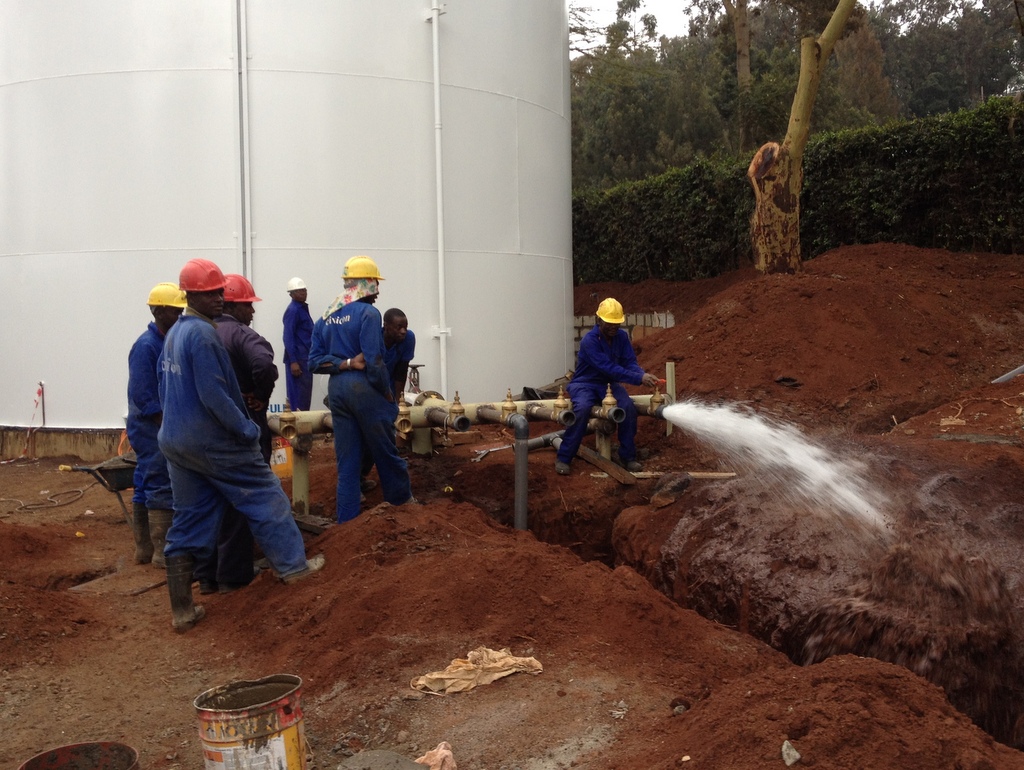 Tank full! (Friday). Seven days to fill with 600,000 litres. Testing each of the supply connections, and flushing them to remove welding and grinding residue.

The tank filled to 100% full Friday, and the hydrostatic test was completed without any leaks.  During the initial fill, the tank settled only 3 mm, which is great news:  full of water, it weighs almost 750 tons, and a lack of substantial settlement means the foundation is strong and performing as expected.  We brought the first of three hospital water headers online today (outpatients, casualty, surgical theatres, maternity, and labs/xray), with no leaks or bursts.  Yes!

Baptism Sunday at RVA. Last Sunday we had yet another reminder of how fortunate we are to have such a great school close by. Started as a boarding school for children of missionaries more than 100 years ago, RVA now also takes day students like our children from the surrounding area, and provides them with an excellent education:  mental, physical, spiritual. 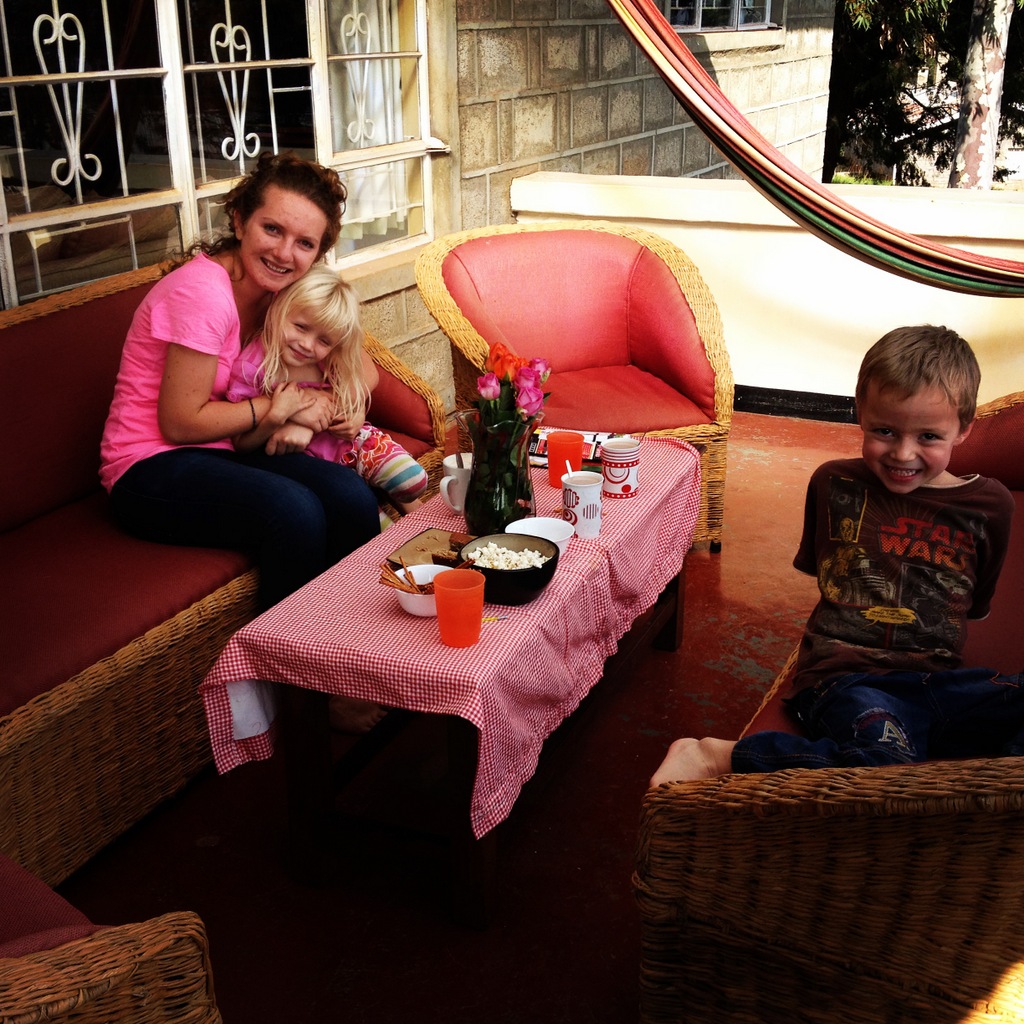 Reunion: Riley’s “Big Sister” from last year, Hanna Joy, back in Kenya for a visit from Germany. Tea party time!

Panoramic view of the Rift Valley from the top of the water tank. 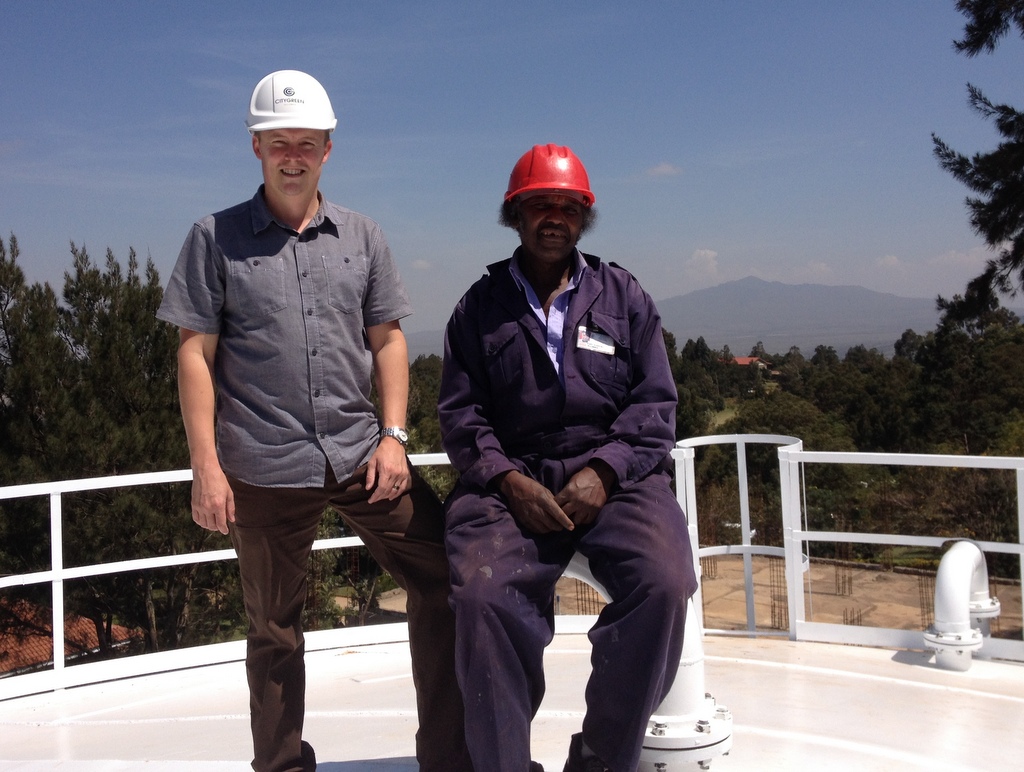 John and I, KH’s head plumber, inspecting the top of the tank before filling. 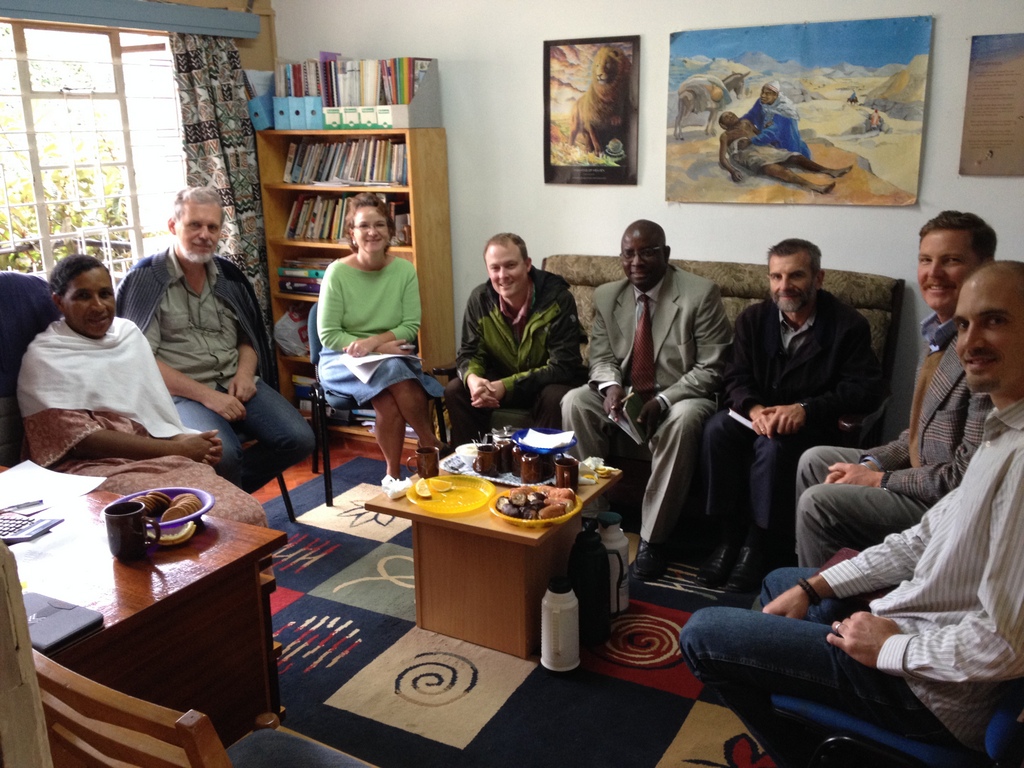 Introducing…the new SIM Kenya leadership team!  Leaders originating from Kenya, UK, Canada, Australia, Germany, and the US. How’s that for a foretaste of heaven?

Part of my work in the last year has been working with the SIM Kenya Area Director in planning and, now, rolling out a transformational shift in how SIM does its work in Kenya: moving to team-based work and ministry.  For now, I am the Team Leader of the “Kijabe SIM Team”…soon to have 23 people (plus 17 children!) by the end of 2014:  two surgeons, seven physicians, four theological educators, two dorm parents, one nurse, two chaplains, one clinical psychologist, and a few ‘odds and ends’ like myself 🙂 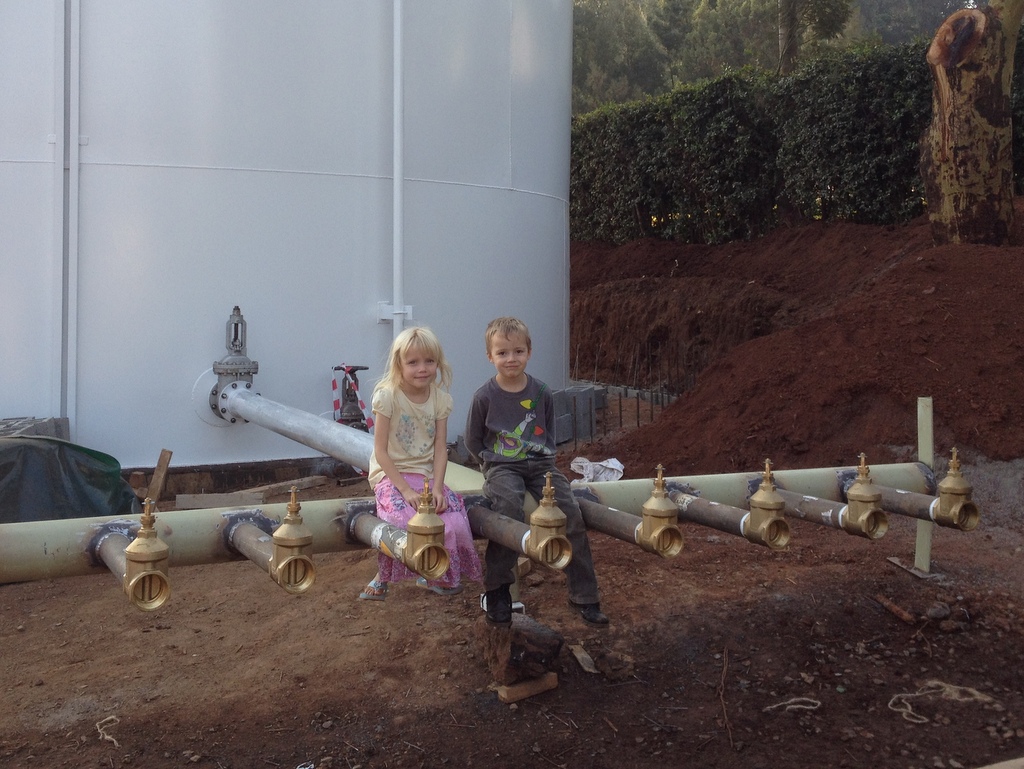 The kids love coming to the water tank. They thought it was pretty cool that Daddy could shoot water 30 feet by opening one of the isolation valves! 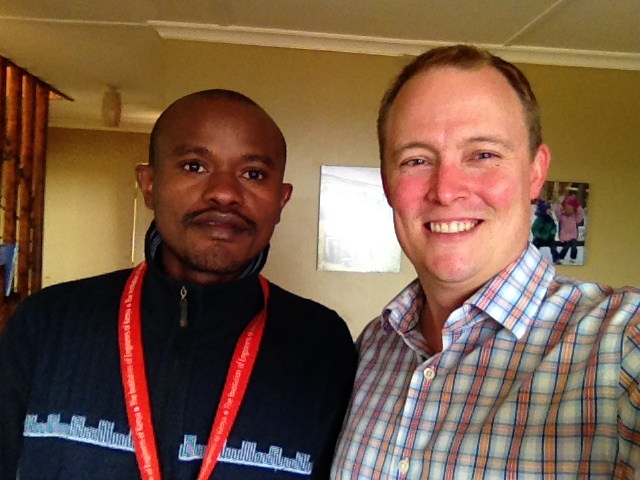 Meet Shammah, our Hospital Engineer…an engineering grad from the University of Nairobi, he is the bright future of Kenya’s developing engineering industry. I’m privileged to work alongside and mentor him. We’re reading the Peter Drucker classic together, “The Effective Executive”…yes, it’s as awesome as it sounds. 🙂  I am enjoying his passion for God and engineering thoroughly.

So that’s my week in pictures…Mardi’s week she’ll probably write about later.  She wrote on a Facebook post yesterday one of the best descriptions of leading conflict resolution in a cross-cultural setting that I’ve ever heard:  “dancing on a tightrope in a storm”.  That pretty much sums her week up.

On Thursday, I got the flu that has been going around Kijabe...on Sunday, when I looked to be on the...