On Wednesday, my phone rang.  “I’ve just heard a dozen gunshots outside, I’ve ducked and run inside, but we don’t know what’s happening.”

It was Mardi:  we were in Nairobi to run some errands.  We had been having lunch in a shopping mall and I had popped out to go to a bank about 200 metres away.  My mind raced…was this another Westgate-style mall terrorist takeover?  What’s my best course of action:  run to her?  Run to a safe place outside the mall so that if one of us is killed, one parent survives?  Hide in the bank? 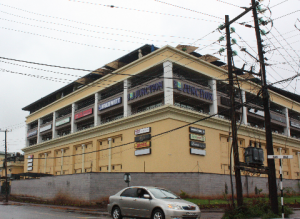 Junction Mall. The police takedown occurred on this corner.

A few minutes + Twitter yielded answers:  the police had interrupted a carjacking in broad daylight on a busy street and shot and killed the perp as well as an innocent bystander.  Just outside the restaurant where Mardi was.  The story never even made the news.

We reunited and headed to pick up our car:  we’d left it with a nearby mechanic,  to investigate the Chernobyl-sized clouds of black smoke that have been coming from our exhaust.  His conclusion:  we had filled up with contaminated diesel at a local station a few weeks prior–a common issue in Kenya.  We’d caught it early enough that it hadn’t destroyed our engine, but it took another hour as we waited for him to finish the repairs:  the delay pushing us into rush hour traffic.

In Nairobi, “rush hour” is not slow lines of generally patient vehicles on 8 lane expressways while you listen to All Things Considered or Hamish and Andy.  It is traffic jams with matatus (Kenyan minibus taxis) weaving in and out of spaces not much larger than they are, sometimes forcing you off the road, while you attempt to navigate a sea of vehicles and masses of people walking home after work.  It is a heart-pounding experience.

We returned to Kijabe safely before dark – time to unwind and let the adrenaline bleed away.  But it was not to be.  When flushing the toilet a few hours later, clouds of steam came rushing out of the cistern with loud popping noises.  Whaaaaaat? 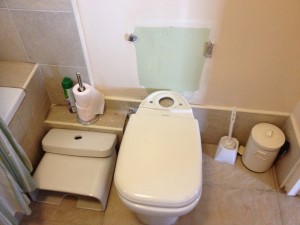 The steam filling the toilet melted the plastic innards, and destroyed many of the gaskets in our faucets. Yikes.

A check of all the faucets, hot and cold, showed the same:  billowing clouds of steam throughout the whole system.  On to the hot water heater:  it was burning hot to the touch, and bulging at the bottom, deformed from over-pressurization and about to blow.  There’s no relief valve on this ancient artifact of a heater, and so I opened the drain outside the house.  There was so much steam in the system that it took ten minutes to drain it all:  a 15 foot, louder-than-a-passing-train geyser of steam spewing out of the wall.  One of the internal heat exchanger coils had worn through, cross-connecting the heater with the rest of the house plumbing and causing it to just keep making steam. 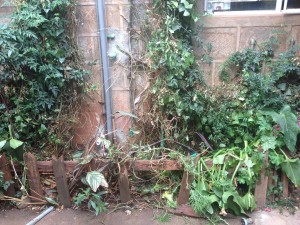 The escaping steam blew a hole through the adjacent plant bed. Sorry, plants. 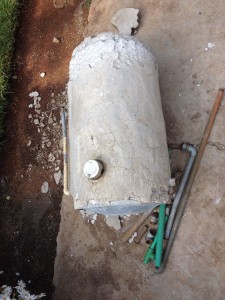 The culprit: ancient and tiny, look closely at the bottom. Originally flat, to sit on the floor, the steam pressure pushed the bottom out three inches–this engineer was fascinated by the textbook case of ‘plastic deformation’ of a metal 🙂

When days like this happen–bookended between news stories of Ebola and the latest violence in the Middle East–when the world seems chaotic and unpredictable, I find myself in the book of Psalms.

I find comfort in the movement that Walter Brueggemann suggests we see in this ancient collection of 150 songs: from orientation to disorientation to re-orientation.

Orientation, in the Psalms that celebrate and give thanks for life when it is chuffing along rather nicely.

But then a disorienting event occurs–unexpected suffering or significant distress–and we find ourselves in the roughly 1/3 of the book that has songs of individual and communal lament and complaining.  Songs with anger and resentment, in which the singer longs for a better time.

And then…movement.  After disorientation, a re-orientation to a deeper understanding of God and God’s goodness.  Songs of thanksgiving, declarative statements of God’s kingship over his creation and his love and care for it and for us.  The singer has experienced too much to simply return to the old orientation:  instead, they are drawn into a new and deeper understanding that “…God’s domain and our domain interact and interlock and mesh and blend and bounce off each other in a whole variety of ways…that’s why life is often so confusing and exciting.” (Tom Wright)

My life experiences mirror this movement.    In the last twelve months, a ‘disorienting event’ in the one-two punch of the Westgate terror attacks and Riley’s potential tumor and growth issues.  Easy answers and triumphalistic exhortations no longer interested me.  I found myself less interested in ‘taking authority over the Enemy’, and more interested in crying out to God, ‘what is going on, and why doesn’t it feel like you are actually Lord of this world?’

But now, a year later.  I realise I am arriving at a different orientation than a year ago.  I find in myself no demand for answers or anger, nor am I satisfied with platitudes like ‘yes…but…God is in control’.  Instead, I am just grateful.  I find alignment with the raw honesty and hope in a song of lament like Psalm 25:

To you, O Lord, I lift up my soul.
O my God, in you I trust;
do not let me be put to shame;
do not let my enemies exult over me…
Make me to know your ways, O Lord;|
teach me your paths.
Lead me in your truth, and teach me,
for you are the God of my salvation;
for you I wait all day long.

Today, if you find yourself in a similar place, may you feel permission from our forebears in the Psalms to ‘lean in’ to a disorienting season of your life.  May the Psalms help you discover a re-orientation towards the God who redeems us in the world, not from the world.

We are re-orienting and feeling grateful this weekend.  Grateful that we were spared from being ‘collateral damage’ from nearby gunfire.  Grateful that we are among the privileged few in Africa to own a car, and that we have a good mechanic who knows the difference between a glow plug and a fuel injector nozzle.  Grateful that the hot water heater did not explode, and that all we have to do is replace it.  Also, to replace the insides of the toilets 🙂

“The weak would never enter the kingdom of love.” - Gabriel Garcí­a Márquez, Love in the Time of Cholera Many...