In September 2011, I stood in front of a class of first year Moffat Bible College students for the first time.

The class:  Intro to Spiritual Formation.  I was uncertain, nervous, sweating.  Would I be able to transcend the cultural differences between this ex-submariner and these African pastors and chaplains?  Would the principles of spiritual formation that I had learned in Western contexts ‘take’ in a non-Western culture?

I had never taught cross culturally.  I had never contextualized or translated the concepts of spiritual formation into a non-Western setting.

At this stage we’d lived in Kenya less than three months, and I was acutely aware of how how much of a ‘learner’ I was, despite my position at the front of the classroom.

I looked at the students staring at me and wondered if any of what we were about to learn together would have a meaningful impact on their lives.

In the first 10 weeks of the course, I had little feedback.  We had lectures and practice in spiritual formation groups on the spiritual disciplines.  We discussed the concept of ‘training vs. trying’.  We debated how God’s grace could be considered to be opposed to earning, but not to effort.  We worked through the ‘principle of indirection’; how the spiritual exercises are a way of placing ourselves before God so that He can change us, not a way by which we train ourselves.

I discovered that it was difficult for the students (some of for whom English is their third language) to listen and take notes at the same time, and so I drafted pre-formatted notes for them to have at the start of each class, filling in key blanks rather than having to write notes out longhand.  Getting photocopies done in Kijabe can be hilariously difficult, and so I burned through more than five printer ink cartridges printing 25 copies of each lecture’s notes over the course of the term.

It wasn’t until after the end of term that I got my first concrete feedback.

One of my students had returned to his home in Mombasa over the Christmas break and used his notes to teach some street boys and orphans at a local rehabilitation program what he had learned and had mentored them in how to be intentional in their spiritual lives.

When he returned, he handed me a stack of photos he taken at the home and a letter.  He had given the boys at the home some booklets provided by Renovare (sponsor of the the course materials), on the basics of the spiritual disciplines, and the director of the home was thankful and had written me a letter.  In it, this man I had never met thanked me profusely for Spencer and his influence on the boys, and noted that the boys had been deeply impacted by Spencer’s mentoring over a four week period.

I was blown away. 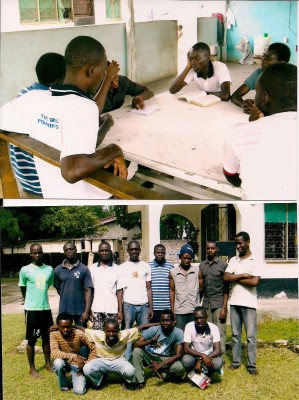 Some of the pictures Spencer gave me after returning from Mombasa in 2011. These are the boys he ministered to at the Furaha Coast Children’s Home.  Spencer is in the back row, second from the right.

That student was Spencer Mutavi.  He was killed yesterday in a road accident traveling from Mombasa to Nairobi.

Today, I grieve.  I grieve the too-early death of a young Kenyan leader.

I grieve for a young man so passionate about spiritual formation that he spent his school holidays ministering at an orphanage in Mombasa for no pay.

I grieve the future impact that Spencer could have had on others throughout his life.

I grieve the loss of the unselfish hunger of a man who wasn’t content just to learn for himself, but immediately put still-fresh concepts into practice and shared them with others.

I grieve a young man who was the first to confirm for me how crucially important pastoral training in Africa is, and how the time spent coming alongside an East African pastor is an investment returned many times over.  Even (especially?) over a three year period.

I am also mindful, and thankful.

Mindful that life on this side of the resurrection can be short.   And sometimes ends much more quickly, and in more heartbreaking ways than it should.

And I am thankful to be reminded that living in the present moment is important.  And that serving others by pouring the little I have in my ‘cup’ into theirs is worth it, even if they don’t live as long as I’d like.

I am thankful as I consider how fortunate I was to know Spencer, for even a short time.

We sent a copy of our 2014 Christmas letter to our partners about a week ago.  If you haven't received...