I remember exactly where I was when I first felt frustrated by how ‘meaningless’ it felt to have to serve in the US Navy. 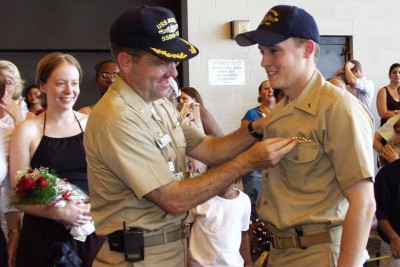 Getting my ‘dolphins’ (submarine warfare qualification pin) pinned on by Commanding Officer Joe Tofalo.  Check out that beauty on the left!

It was October 1997 and I was spending a semester studying abroad in Australia.  I was at a church service, where a group who had just returned from a trip to Namibia was speaking.  I listened to their presentation and was struck by how ‘meaningful’ it all seemed, and how, by contrast, what I was doing (studying Civil Engineering) was not.  In hindsight, this was the first time I had a gut feeling that I might want to serve others in the developing world.

I felt really sad that night that I was bonded to the US Navy after graduation.  I had forgotten, for the moment, that the Navy was paying for my (very expensive) private undergraduate engineering education, and could only think “Lord, if you’re placing this desire to serve others in me, how can it be possible that I have to serve in the military for five years?”

I made an appointment with the pastor, and shared with him my inner struggle:  I have a growing conviction to serve in the developing world, but I have this obstacle in my path.  What do I do?  He gently noted that it might be possible to serve the Lord faithfully in the Navy and then consider what might follow later.  Aside:  This man of great judgment and counsel married Mardi and I a year later, and has on many occasions provided helpful guidance to this easily-distracted-by-shiny-things person.

I spent 1998-2004 as a submarine Naval Officer.  Nuclear Power, Prototype and Submarine Schools.  Three years deployed (15 months underwater) on the USS Maine.  Two years teaching Strategic Nuclear Command and Control.  Work so consuming that everything faded except receiving my warfare and engineering qualifications.   Managing divisions of mechanics, missile techs, and radiochemists.  Memorizing engineering schematics – how every valve and piece of equipment worked, down to the smallest detail and every backup and alarm.  When the throttles are opened on the main engines, exactly what happens and in what sequence in the reactor plant?   When you lose all power while submerged, which valves fail open and which fail shut? 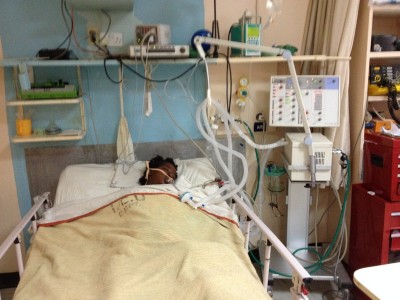 A place where all three of the medical gases are used every day: our small ICU. Ventilators use both air and oxygen to keep very sick patients alive, and vacuum is used to provide suction as needed to clear airways.

It’s 2015 now.  We live in Kijabe.  A few years ago it became apparent that the number of beds and surgical theatres in the hospital had far outstripped the capacity of the aging oxygen plant.  After completing the water project in July, the question:  Would I help the Hospital engineering team develop and deliver an upgrade of the entire “medical gases” (oxygen, vacuum, and compressed air) system?

It’s the most complex project I’ve helped with here:  conversations with doctors to get details on their current and future clinical needs, meetings with manufacturers to find equipment (all manufactured overseas) with local maintenance support, a complete audit of all our medical gas piping and outlets to find leaks and identify system flaws, developing technical specifications.

I was chatting the other day with one of our docs, explaining the redundancy we were building into the new system and walking him through the valves that fail open upon a loss of electricity (to maintain pressure, supplied by a backup oxygen bank), and he said, “Aren’t you a civil engineer?  This is a pretty far cry from a water tank or a bridge, isn’t it?”

Without thinking, I replied “Well, it’s basically identical to the oxygen generation and distribution system on a submarine”.

And then I stopped. 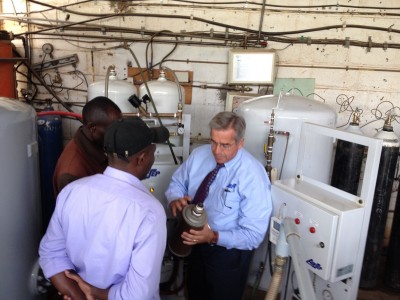 I don’t have to think much about the design and operation of our new medical gases system because I learned its engineering basics years ago.  On a submarine.

You know, during that ‘meaningless’ time I spent before I got to my ‘real work’.

As I reflect on this, I am struck by a few things.

First, how tempting it is to think of what we’re currently doing as unimportant, or at least as less important than ‘what we’d really like to be doing’.  There’s a ‘the grass is always greener’ distraction in much of life, I find, a constant draw to ‘something else’ and tendency to see our present lives and work as ordinary and less important than something else, or someone else’s work. 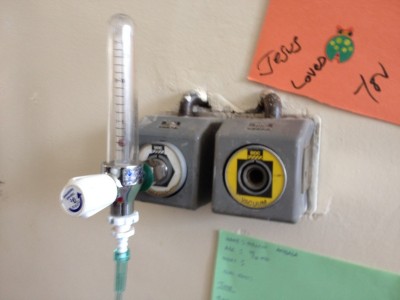 Oxygen and suction outlets in the pediatrics ward

Second, I am struck by how nothing is wasted in God’s economy.  How important the present moment is, and working with all your might at what you’re doing now.

“…the robust Jewish and Christian doctrine of the resurrection, as part of God’s new creation, gives more value, not less, to the present world and to our present bodies…with the result that what we do in the present matters enormously….a reason not for sitting back and waiting for it all to happen but for working hard in the present, knowing that nothing done in the Lord, in the power of the Spirit, in the present time will be wasted in God’s future (1 Corinthians 15:58).”
-Wright, N. T., Surprised by Hope

Nothing done in the Lord, in the power of the Spirit will be wasted in God’s future.  In my little story, it was a very near future.  But the question hangs and resonates:  what we do now matters, and has a future impact that we won’t fully grasp until later.

So be encouraged, and take heart in your work:  do it in the Lord, and the power of the Spirit.  Whatever you’re doing, work hard at it.  Be excellent at it.  Become the best and most capable you can be at your particular vocation, because what you do and how you do it matters.

In September 2011, I stood in front of a class of first year Moffat Bible College students for the first...