When I write it out like that, I feel like I’ve won something on The Price is Right rather than committing to buying something huge.

After I wrote the blog update last night asking for prayer for our ailing car, I went to bed at 10pm.  An hour later, Riley woke me up:  “Daddy, I woke up and now I can’t sleep!  I think it might be jet lag.”  A little bit of benadryl with codeine and she was snoring again.

So I had a bit of time to think and pray.  I prayed for the car, patience, that God would provide us with a car while ours is being fixed.  I fretted about lost productivity and increased risks due to driving 1.5 hours one way into Nairobi each time we visit the mechanic.  I felt silly praying for a car, especially when we are surrounded by people who can’t afford to send their children to high school, or to have three meals a day.

After a few hours of this, I sensed the Lord saying, “Andy, I’ve got this.  Leave it in my hands.”  And so I did.  Right before I fell asleep, I prayed, “Lord, if the car starts this morning and has the power to get up the mountain, I will drive it to the mechanic in Nairobi.  I trust that you will provide a car for me to drive home from Nairobi in, and have in the interim.”  I felt peace, and slept.

Here is what happened after walking the kids to school:

0800:  Meet a friend who offers me use of a 4WD they are minding for an overseas friend, until ours is fixed.  Car is in Kijabe and in the garage, so I’ll need to find another car to drive until this one becomes available.  Answer to prayer #1.

0900:  Try to start car:  after a few minutes and clouds of black smoke, it starts.   20 minutes later, after straining and stalling several times while slowing to let assorted goats and sheep cross the road, I arrive at the top of the mountain and start the downhill highway journey to Nairobi.  Answer to prayer #2.

0930:  While driving on the highway, a friend in Nairobi calls.  I saw your Facebook post, my wife would like to lend you her car for the next week or so, it will be waiting for you to pick up in Nairobi after you visit the mechanic and you can drive it back to Kijabe and keep.  Answer to prayer #3.

1030:  After an hour’s poring over the car with the mechanic, his advice:  don’t bother with an overhaul, it’ll take 8 weeks and cost you far more than it will cost to just replace the whole engine.  I can do it for half the price of an overhaul, and have it done in 3 weeks.  Answer to prayer #4.

1200:  Lunch with friends who pick me up from the mechanic and then take me to where my other friend’s wife’s car is waiting for me to drive it back to Kijabe.

1400:  A sobering event.  If you’ve never visited Africa, it’s hard to describe how tenuous life can be here, and how dangerous driving is.  The Kijabe-Nairobi road is regularly listed as one of the most dangerous roads in the world.  Once again, I was reminded of this while returning to Kijabe, driving along a curve in the road that has a sheer cliff on the edge of the shoulder.

As I rounded the curve, I saw a puff of smoke and fire leap up immediately to my right.  As I drove by, I saw it:  A matatu (Kenyan minibus) had just gone over the edge and exploded as it hit the bottom of the cliff.  It’s hard to imagine there were any survivors.

I am reminded tonight that sometimes things break.  Cars, our bodies, systems “tend toward a more disordered state” and break down, and there isn’t much you can do to slow or prevent it.

I am reminded that God is our provider.  Whether through his people, or sovereignly and supernaturally in ways I can’t discern the means behind, it is God who provides.  Not my ability to project manage, solve a challenging technical problem, or manage risk.

I am reminded that our God is nearby, present, and active in God’s creation; not far-off and distant, observing events on earth coldly from a faraway vantage point.  We called out for help last night, and he replied.

And I am grateful. 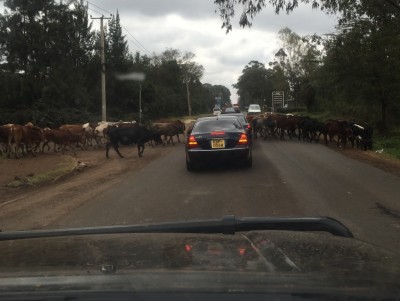 Traffic stopped on one of Nairobi’s busiest roads, by a herd of cows. En route to mechanic.

We returned to Kijabe yesterday around lunchtime and it is great to be home. The last 24 hours has been...