We’ve been back in Kenya just over a month now, and it’s been a whirlwind of the usual reconnecting, immune systems recovering from changing continents (not a pretty sight), getting back into the rhythms of life and work.  We’re delighted to be back.

In this midst of this busy season, I was invited by Shammah, our hospital engineer, to attend his dowry negotiation ceremony.  An important tradition in most Kenyan tribes, the negotiation and payment of dowry from the groom’s family to the bride’s is a formal precursor to being engaged.

I’ve had the great privilege of working alongside Shammah for the last three years on numerous engineering projects, as well as participating in a men’s spiritual formation group for the last year with him:  he is now leading our fourth group.  He’s a passionate, competent, articulate, and deep-thinking man, and I was deeply honored to be invited to participate in this milestone in his life.

I was also a little worried.

The ceremony was to take place near Nyeri, a four hours’ drive north of Kijabe in the picturesque foothills of Mount Kenya.  We needed to depart Kijabe early in the morning so as to have a few hours in Nyeri at the bride-to-be’s family home, and would have to return late at night:  violating my rule of never driving after dark.  Our car was with the mechanic having its guts replaced (engine and suspension), and a friend had offered an old 4WD I could borrow for the journey.  Additionally, as an mzungu (foreigner), I was concerned I might do something culturally horrendous, resulting in Shammah’s expulsion from his potential future family, indeed from all of Kenyan society 🙂

Now, I’m not naturally a risk-taker.  I know, I know…it sounds ridiculous coming from someone who likes to climb mountains, has lived on three continents and spent 18 months of his life underwater on a submarine.  But I honestly don’t consider myself to be a risk taker…I’m a risk manager.  I don’t mind taking risks so long as I can appropriately consider and manage them.

So I was worried on Saturday morning as we departed.  There were just too many risks that I had no influence over.

We left Kijabe early in the morning, and convoyed to Nyeri in a group of ten cars and around fifty of Shammah’s family and friends.  Here’s the day, in pictures. 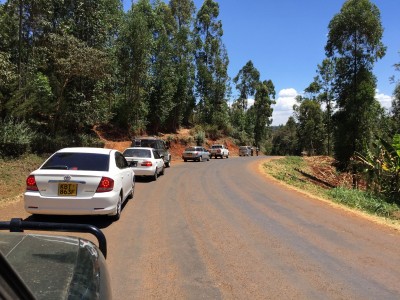 Part of the procession of cars filled with Shammah’s friends and family en route to Nyeri. 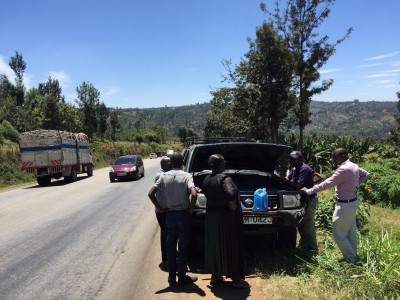 A hiccup: our borrowed 4WD had a radiator leak and didn’t want to climb the foothills around Mt Kenya without overheating. Some additional coolant and lots of prognosticating and chin rubbing, and we decided to continue at a lower speed, stopping every so often to prevent the engine from overheating. 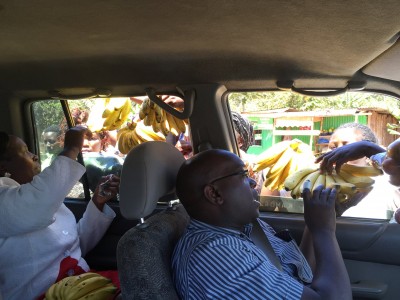 There’s always time to stop na kununua ndizi (and buy bananas) on the side of the highway.  It also helped the engine to cool down a bit.

Upon arrival, the women in our party left the cars and approached the gate of the bride to be’s family home, singing in Kikuyu.  A large party of women from the bride-to-be’s family responded back in song:  verses of greeting, invitation, and ultimately welcome.  You can listen in by clicking on the video below.

The arriving party of Shammah’s family and friends is welcomed with song by the family and friends of the fiancée. The proposed marriage is inter-tribal (a Kamba marrying into a Kikuyu family), and so the ceremony and pageantry were deliberate and scripted. It was a beautiful welcome.  Both families are Christian, and so after the welcome, the ceremony was opened with a word of prayer and invitation to God to guide our time together. 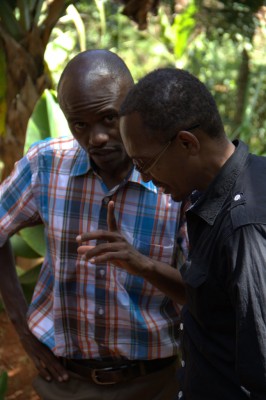 Shammah confers with Peter about protocol, a friend and one of our docs at the Hospital. 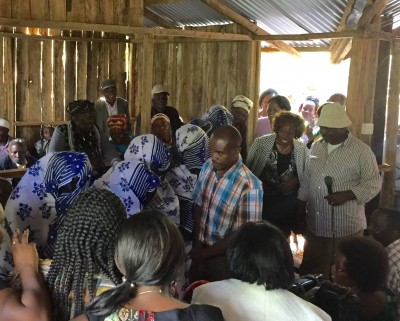 As part of the ceremony, five women completely shrouded in blankets were brought in and Shammah had to try to pick his fiancée out of the group…a game of laughter and great humor. 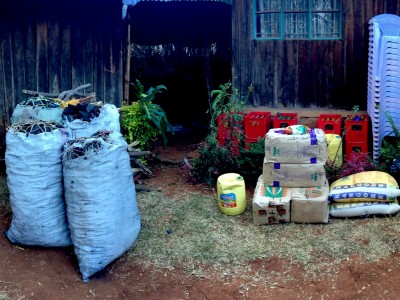 The bride’s family put on a wonderful feast for the many attendees (more than 100), and part of Shammah’s gift to his new family was to help provide the food, oil, drink, and charcoal and wood that was used to cook the feast.

Nestled in the foothills of Mount Kenya, the bride’s family land overlooked a panorama of green valleys and treed hills.  This was the small covered shed just downhill of the house where we ate, prayed, and sang together. 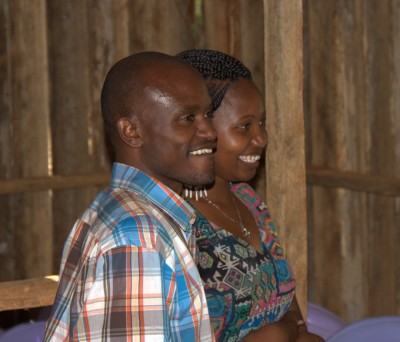 The happy couple: Shammah and his to-be-fiancee, Jane

It was a great day.   I was struck in particular by how intentional and thoughtful the ceremonies were:  Shammah had spent many hours planning and consulting how it should unfold and how to honor and respect his future wife’s family appropriately.

Throughout the day, I couldn’t help comparing Shammah’s “cross-cultural” engagement experience (marrying from one tribe into another) to my own 18 years ago.  I found myself wondering:  what would it have been like to have had formal cultural expectations regarding engagement and marriage spelled out for me when Mardi and I were considering marriage?  What would I have done differently if I’d had a community of wise counsel around me to advise me on how to approach and best honor and respect Mardi’s parents when we were preparing for marriage?

We had a hair-raising trip back to Kijabe, leaving Nyeri after dark and arriving in Kijabe just before midnight.  Along the way, we passed three multi-vehicle accidents with fatalities, one of which involved a collision of matatus and bodies piled on the side of the road waiting for the always-too-far-away ambulance.  Additionally, one of our vehicles returning to Kijabe in convoy had a tire damaged by carjackers who had laid rocks across the road designed to puncture tires, while the thugs waited about 1 km up the road for the driver to realise the puncture had occur and stop.  Suspecting this, the car stopped immediately, quickly changed the tire, and sped off before the carjackers could double back.

It was a couple of hours after returning to Kijabe before the adrenaline left my body and I was able to sleep.  Risks taken, but the reward was worth it.

When I write it out like that, I feel like I've won something on The Price is Right rather than...