We started sending the Hospital’s raw sewage downhill to our new wastewater treatment plant this week.  We had a few months delay between construction completion and actually “turning it on” due to lack of funds, but it’s finally underway!  Here’s a short video of Riley and Liam enjoying the, um, smell.

This final phase of an engineering project is called “commissioning”.  For our new wastewater treatment plant, it involves: 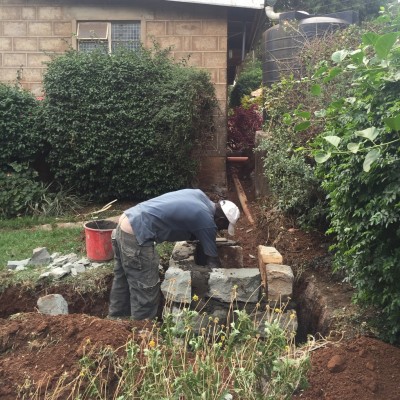 One of sixty:  Laying new connection pipes and building manholes near each effluent source (in this case, our house!).

One of many examples:  all of the toilets, sinks, disposal drains and disinfection stations in the nine surgical theatres flow to a too-small and old septic tank, inevitably overflowing it and filling a trench that carries a river of raw (hospital!) sewage down the mountain.  Now we connect this drain from the theatres to the new sanitation pipes and voila!  It flows tidily (and invisibly) one kilometre down the mountain to our new wastewater treatment plant, where a combination of sunlight, oxygen and bacteria will naturally decompose the pathogens in the waste over a period of thirty days, releasing water that is of suitable quality for release to the natural environment. 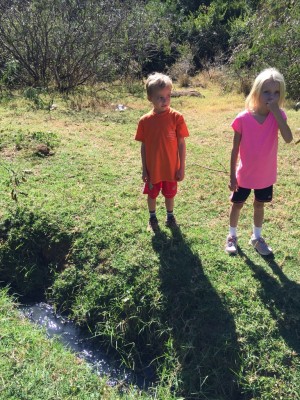 Riley’s face says it all. This river of raw sewage will soon be dry, once the plant is fully commissioned.

There are now several teams of local fundis (tradesman and tradeswomen!)–plumbers, masons, trench diggers, and ladies to make them chai during their breaks–working in parallel to disconnect the old septic tanks and build new connection points.

A panoramic view of the wastewater treatment plant

I am delighted to note that the first effluent has started to fill our treatment ponds:  I took the kids on a ‘poo tour’ yesterday, and despite the incredibly bad smell, it was so great to see the sewage start to fill these ponds. 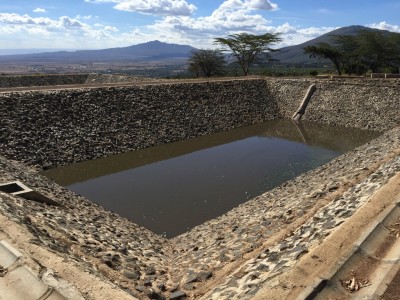 The first lagoon a particle of poo encounters upon arrival: the “anaerobic lagoon”, where it resides for about six days before transiting onwards via an overflow weir to the second lagoon. It’s brown because…well, guess. 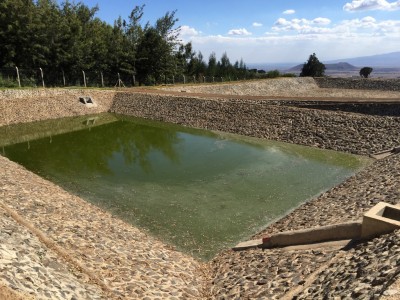 After roughly 6 days in the anaerobic lagoon, sewage moves to the “facultative lagoon” for about two days. It’s green due to normal algal formation:  we filled the lagoon 1/3 full several months ago to provide a ‘fresh water cap’ in order to reduce odors. Or at least, try to reduce them.  In this situation, “green is good”. 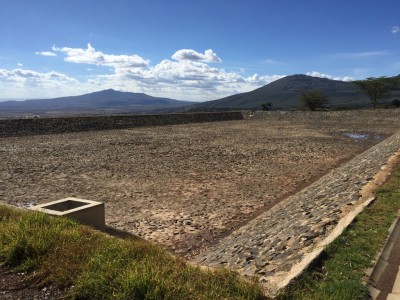 After a couple of days in the facultative lagoon, the water transfers to the “maturation lagoon”, the final lagoon in the treatment process, where it resides for about two and a half weeks and finishes the natural biodegradation treatment processes, before being discharged to the natural environment.

It is difficult to put into words how wonderful it is to see this plant, the result of more than five years’ planning, fundraising, negotiations with the Kenyan government, and construction, get “turned on”.  Engineers from all over the world:  South Australia (Alfonso, Tim, and Karen at Inside Infrastructure), Michigan (Jim and Jullie with EMI), and Kijabe Hospital (Shammah and myself) have donated significant time and effort to design and construct an environmentally friendly engineering solution that will treat Kijabe Hospital’s raw effluent and no longer cause cross-contamination with the water supplies of nearby villages.

When commissioning is complete, the casual visitor to Kijabe Hospital won’t even know it’s there.  And that’s exactly how it should be.  Allowing the mission of the hospital to care for the “least of these” to continue to grow and give hope to those who have lost it.

A couple of weeks ago I was down in the outpatient department when I was pulled into a room by...