We have days here that seem ordinary:  walk the kids to school, go to work, prepare dinner, read a book, go to bed.

And we have days like yesterday, where for a moment the thin layer of the material world is peeled back and we glimpse, for a moment, the presence of angels on our bumpers and realize there’s no such thing as an “ordinary” day.

Riley had one of her semi-annual visits yesterday to the endocrinologist to check how she is responding to the growth hormone and measure her growth (great and measurable, respectively).  Mardi drove her on the three hour round trip into Nairobi for the appointment.

On the return journey, a few minutes after turning off two-lane Mombasa-Kampala highway onto the steep crater-filled road down the mountain to Kijabe, the car began to shudder violently and the rear brakes stopped working.  Despite the steepness of the road, Mardi was able to slow the car enough to put it in the ditch on the side of the road and stop it. 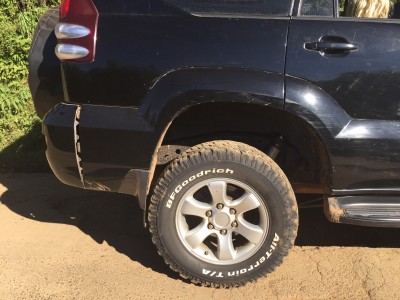 The right rear wheel was at a crazy angle and now rubbing on the bumper.  As she stared at the wheel, wondering what to do, a man on a piki (motorbike) drove up, holding out a bolt in his hand:  “I found this on the road above you…I think it fell off of your car.” 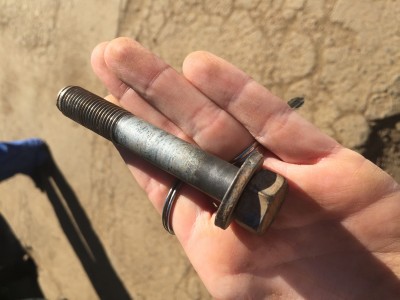 Mardi called me:  “We’re on the side of the road, the wheel is crooked, and a bolt fell off.  Help?”

Within 30 minutes, five people had stopped to offer assistance, two mechanics had advised us on the likely root cause and one of them was driving me up (at rally car speeds) the mountain with a new bolt, and a local taxi operator had picked up Mardi and Riley and brought them back home.  He refused payment for the 30 minute round trip journey, saying, “friends help each other in times of need.”

Turns out this bolt holds one of the rear suspension arms onto the axle:  the locking nut holding the bolt in place had vibrated off the bolt (unusual, but not unheard of given the magnitude of vibrations our cars are subject to on our local roads).  The bolt then vibrated out of place and fell out, causing the suspension arm to fall off the axle, knocking the axle from the arm out of alignment by about six inches, as shown by this arrow: 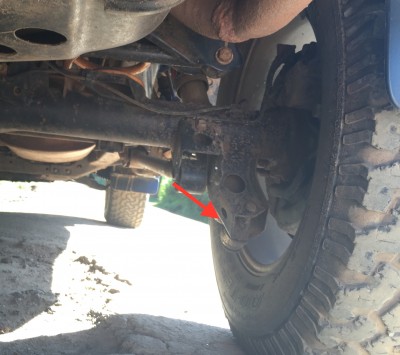 That six inch gap isn’t supposed to be there!

Before it got dark that night, a local mechanic and I were able to jack the car up, swing the axle and wheel back into alignment, and reinstall a new bolt and nut, putting the car in a safe enough condition to drive down the mountain to Kijabe for a follow-on inspection and tightening of all the suspension bolts. 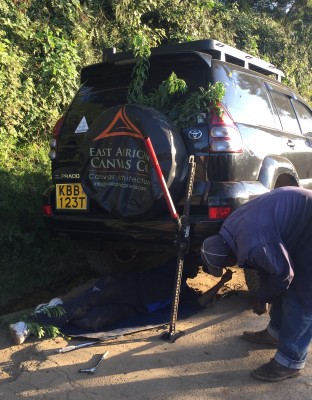 Universal language in Kenya for disabled vehicles: pull down some tree branches, lay them in the road and put them on your car.

Today, I am conscious of the presence of angels on our bumpers.  When the bolt fell out, Mardi struggled to maintain control of the car despite the very slow speed of the car on our local road:   it is a miracle that the bolt didn’t come off when Mardi was speeding down the highway just two minutes before.  She could easily have lost control of the car and become just another statistic on this dangerous road.

Another miracle?  The local community here.  Friends who stop and offer assistance.  Mechanics who drop what they are doing and fix the car.  A friend who picks up a tired Mardi and Riley and returns them home at his own expense.

I am reminded today that God is with us, present, concerned with the everyday.   Both through supernatural protection and via human beings as His hands and feet.

This reminder of God’s presence is one we’ve had a few times in the last 30 days.  We had a fire that destroyed one of the Hospital buildings and required evacuating part of the hospital at night…with zero injuries.

A couple of days later, after the Hospital received a patient who had been beaten severely, Mardi received a phone call:  “That man you are treating is a murderer and was run down by the angry community…they heard he survived and an armed mob is walking up the mountain from Mai Mahui to finish the job.”  A quick call to the police yielded the following advice:  “We only have two rifles and cannot protect your staff when the mob comes.  Get that man out of your hospital as fast as possible and we will drive him to the district hospital an hour away.”  We did, they did, and no one was hurt.

There’s no such thing as an ordinary day.  Angels on our bumpers.  Thank you, God.

We woke this morning to a holiday:  while American Thanksgiving is not observed in Kenya, Pope Francis was kind enough to...