9:39pm.  I’m on call for pediatrics after a full day’s work at the hospital, and have just kissed the kids goodnight.  The phone rings  – Dr Faith, a family medicine (GP) trainee working under my supervision tonight.  She’s out of breath and running.  “ICU 2 – has extubated – can you come?”  I start to run.

It’s a 2 year old (child #1).  He had his tonsils out today, but his airway swelled afterwards, requiring insertion of a breathing tube.  While sedated and sleeping, he’s somehow pulled it out.

I arrive seconds after Faith and the surgeon (David).  We know at a glance that his airway is a bloody, narrow, swollen mess:  he’s gasping and blue.  I order paralysing drugs, the nurses give them, David slides in the tube.  The little boy’s lips turn from blue to pink as oxygen flows in.  Faith increases his sedation drugs and restrains his little hands – we don’t want this to happen again.

10:15pm – He’s stable, and I leave to check on a baby who was just admitted (child #2).  5 weeks old, he’s jaundiced with a swollen liver.  His heartbroken mother tell us her previous child died of a similar illness at 8 weeks of age – will her new baby die too?  We order ultrasounds and other tests that might unearth clues – can we change the outcome for this family this time around? 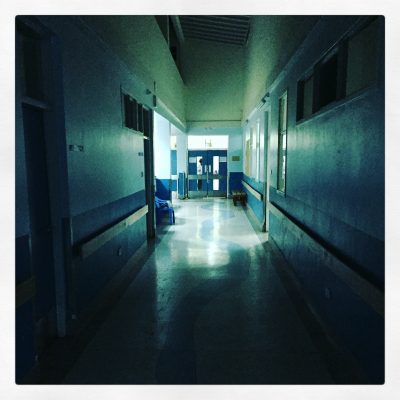 11:37pm – As I finish up, Faith calls. “Can you come to the operating theatre – I need you”.  She hangs up without saying why, and she doesn’t have to.  We both know that at this time of night, it’s probably a newly delivered baby in trouble.  I run, putting on my scrub hat and face mask.  The door to theatre is locked and no-one’s responding – a nurse sees me: “they’re in nursery, daktari“.  The baby has been rushed at top speed to a place with more staff and equipment.  That’s not good. 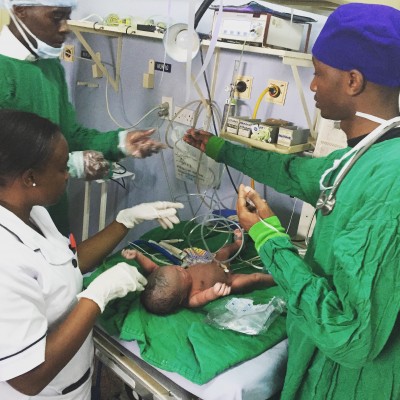 I run to nursery to find a baby (child #3) gasping for breath as the team gives oxygen.  He had a poor blood supply during labor, was born covered in his own stool, not breathing and his heart barely beating.  One of our excellent interns was at the delivery and started CPR and gave adrenaline – despite this the baby has inhaled some stool and his lungs are struggling.

We spend 3 hours in constant action.  High flow oxygen through the nose, a breathing tube to the trachea, a needle into the chest for escaped air from damaged lungs, ventilator, heart-pumping medicines, lung pressure medicines…  After 3 hours of lying floppy and gasping he seems almost stable and we are able to let him be.  He opens his eyes and looks at the nurse, and at me.  He cannot cry as the breathing tube blocks his voice – so he balls up his fists, flexes his arms and scowls as if to say this whole evening has been a bit much. 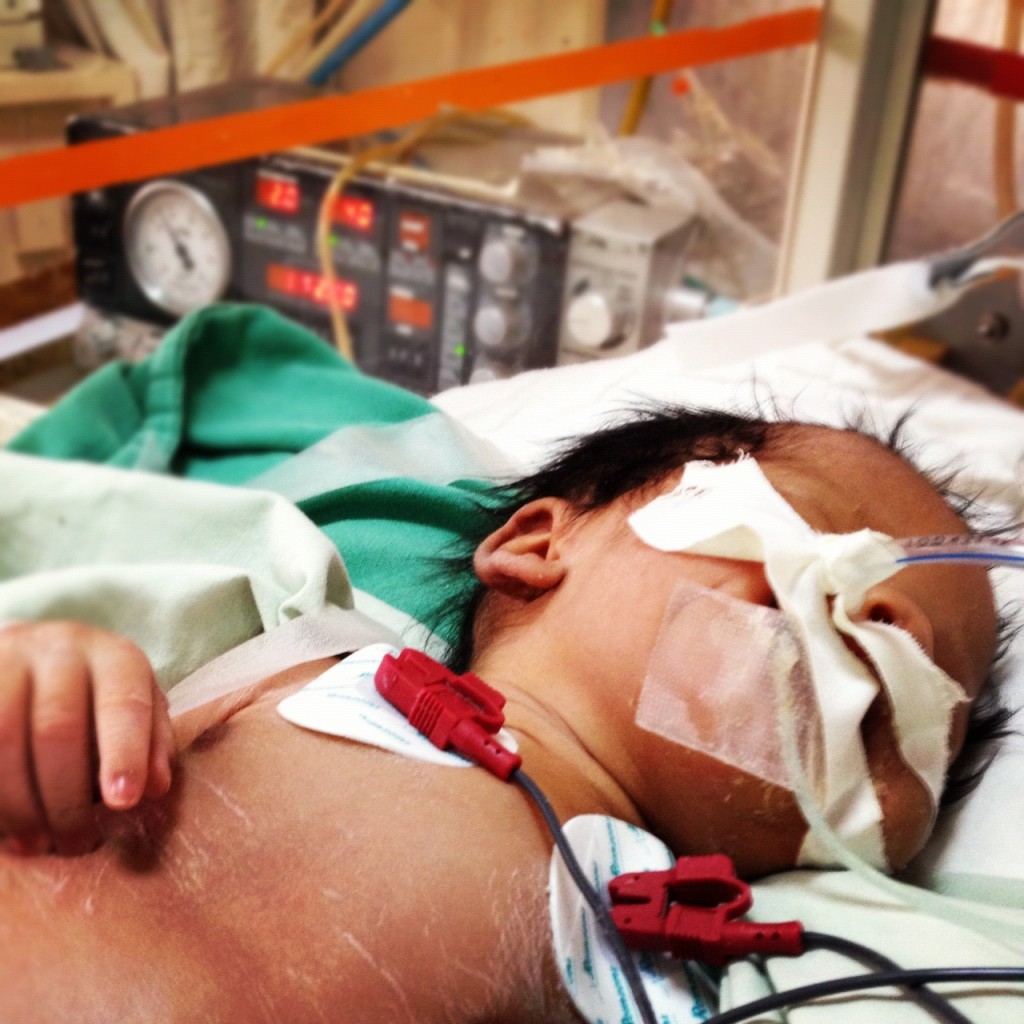 2:30am – just as he stabilises, the lab calls.  At 8pm we had seen another baby (child #4) in the emergency department with severe jaundice – a bilirubin level of 38 .  At levels over 20, we’re worried about brain damage, and 38 is so high I honestly didn’t believe it.  Just in case, we had started aggressive therapy and drew another sample.  The lab tells me his latest level is still 36.  This is dangerous, possibly fatal.

We urgently need to remove all of the blood circulating in baby’s body and replace it with donated blood – and then do the entire process again immediately – a process called a “double volume exchange transfusion”.  By 3:30am Faith, the intern and I start the 4 hour process – slowly remove 2 teaspoons of blood, replace 2 teaspoons of blood.  Repeat 45 times. 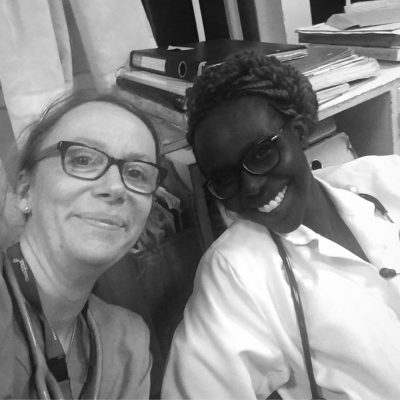 Faith, family medicine trainee and comrade in arms for a long night. Selfie snapped for posterity in the 3 seconds of calm between ICU and exchange transfusion.

He’s not doing well.  His lungs aren’t inflating properly – after an hour of troubleshooting, I am forced to acknowledge his breathing tube must simply be too small – I have to put a larger one in.  Equipment, paralysing drugs, oxygen, all over again – the tube goes in, and his oxygen level improves.  After all this stress, he still opens his eyes at the end of it all – a fighter.

5:30am – I’m cautiously happy he’s stable enough, and I walk home and climb into bed.

He’s a precious 10 year old boy (child #5) who came to us last week, confused.  He had started to act strange, his words garbled and slurred.  We admitted him immediately, by morning he had slipped into a coma.  None of our tests uncovered a root cause – brain swelling unexplained by excessive blood or spinal fluid, and despite strong antibiotics, antivirals and brain-swelling therapy he continued to worsen.  Even more concerning, he’s the third kid in 6 weeks who has come in like this – and the last 2 died.  We hoped and prayed that this wasn’t the same thing. 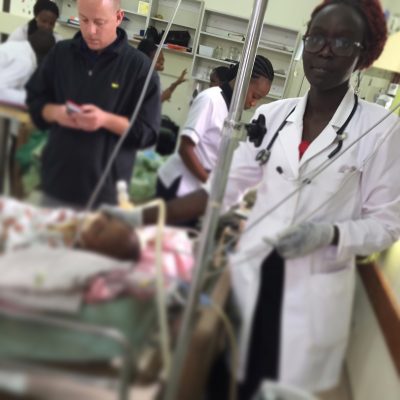 Last week, when we had hoped and prayed he would improve.

6:42 – I arrive at his bedside.  His pupils are enlarged and won’t react, he has rapidly worsening brain swelling, and there’s nothing more we can do.  I do other tests for brain death – he fails every one.  His brain is damaged beyond repair.

We’re now on the verge of our third child dying from this mysterious cause, and it’s time to enlist the help of the Centre for Disease Control (CDC) and Kenya Medical Research Institute (KEMRI) to find out if it’s some rare or new public health crisis.  We will keep his heart beating until his parents arrive in a couple of hours – in addition to telling them this morning that he is brain dead, we need to get their permission to do an autopsy to try and figure out why.

8:40am – A surreal but important conversation.  I sit with the pediatric team, arranging with the CDC on my phone’s speakerphone for their pathologist to come and examine this child’s body.  He’s not even dead yet – the family is on the way from a town 90 minutes away, and we need to give them a chance to say goodbye.

I start to feel the beginnings of relief – most of the children on my watch last night have been cared for, and my night on call appears to be over. 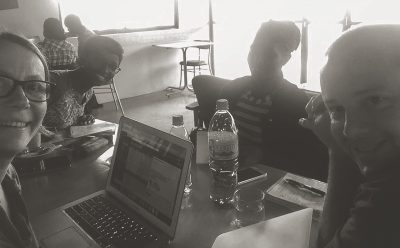 HDU3?  This baby was not even on my radar.  A 2 week old with Down Syndrome who has had surgeries for a bowel blockage – I arrive and the interns and nurses are doing CPR.

Snap into resus mode.  CPR, adrenaline, ET tube, calcium, bicarb, glucose, fluids – nothing makes a difference.  An overwhelming infection in the context of too many other problems has claimed this baby, whose parents speak neither Swahili nor English and watch us as we struggle and fail.

9:40am – We pronounce him dead almost exactly twelve hours after I first came into the hospital last night.

It’s now time to start the new day taking care of the other 20 children admitted to the peds ward who have been stable and recovering all night.  Most of them are healing, most of them will go home.

A dark and difficult night. I start to see the other kids on rounds – and as I do, I am also reminded there is always dawn after the darkness.

Since handing over the Medical Director role, I am officially back on the peds team, rather than filling in occasional...