The railroad tracks of apparent contradiction (3/5/11)

It was just under a week ago that we first took the steep, twisty, narrow road to Kijabe.  The stunning views across the Great Rift Valley were the first thing we noticed…breathtaking.  The people, and the ‘African massage’ you get as your car rattles over potholes the size of a golden retriever were the second.

We’ve been here nearly a week, and are settling in well…the kids have unpacked their toys in their room and created their own little nests.   We have unpacked our boxes and started to figure things out like how to bake at 7,000 feet elevation (you cut down on baking powder…who knew?), learning not to leave the windows open if you’re not home (the monkeys invade and go on a poo-tastic adventure), 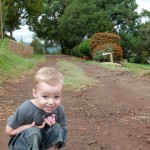 Check out all the sweet dirt!

telling the kids that the three kangaroo-sized baboons in the front yard are not ‘doggies’,  and discovering that the water filter appears ineffectual…judging by the rumblings in our bellies.  We have had people bring us cookies and muffins to welcome us here since we arrived, and it has just been lovely.

Mardi has started work at the hospital, meeting patients and getting to know how they do things in Kenya.  We’ve started to connect with some of the local Kenyans here, as well as some of the doctors that Mardi will be working with, and their families…there are some amazing people here and it is humbling to be a part of their community. 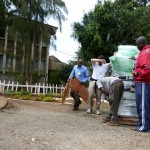 We are struck by what a place of contrasts and apparent contradictions Kijabe is.  It’s the stunning vistas over the Great Rift Valley…and the IDP^ camps in the valley filled with some of the 600,000 people who were driven from their homes during the post-election violence of 2007.

It’s the warm and welcoming generosity of the rural Kenyans who have welcomed us to Kijabe…and the lady who came to our door after dark last night with tears streaming down her face, with a story of domestic violence and could she please have money for a bus ticket to take her kids to her brother in Uganda. 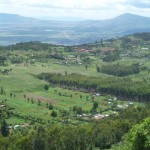 View of Rift Valley from Kijabe

It’s the friendly building superintendent who encouraged us when we were feeling a bit low (and who shares my love for good coffee)…whose family was forced to move 4 hours away because of the 2007 violence and he hasn’t seen them for 6 months.

It’s the fragrant smell of hibiscus and bouganvillea in the air…and being woken up three nights ago at 4am because the hospital (100 metres away) was experiencing a violent robbery.

I recently heard someone* describe life this way–that rather than viewing life as a series of hills and valleys, good experiences and bad, they reckon it is more like following a railway, where you are simultaneously experiencing joys and sorrows.  There’s always something to rejoice about, but there’s usually also something to grieve at the same time. 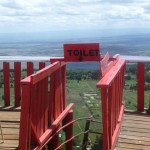 Loo with a view?

I found this a helpful mental image of life pre-resurrection…experiencing the ‘already’ and the ‘not yet’ of the Kingdom of God, sometimes in sharp relief, wherever we are…Adelaide, Grand Rapids, Washington DC, Pasadena, or Kijabe.

We are feeling rather inspired to follow a master who says he came to “bring good news to the poor, proclaim release for the captives, recovery of sight for the blind, to let the oppressed go free, and proclaim the year of the Lord’s favor.”  (Luke 4:18).

And yes, we are settling in. 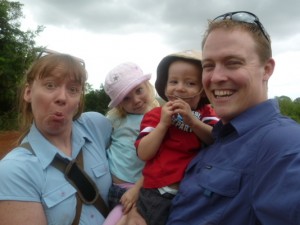 ^UNHCR defines an IDP as:  “Internally Displaced Persons–someone who is forced to flee their home but who remains within their country’s borders. They are often referred to as refugees, although they do not fall within the current legal definition of a refugee. The region with the largest IDP population is Africa with some 11.8 million in 21 countries.”

*That someone was Omar Djoeandy, Direction of SIM Australia, quoting, I believe, Rick Warren

What's on our Kindles?   (this post is a copy from our updated 'more' tab at the top of the...