We’ve had Mardi’s parents here for a visit the last few weeks, and their Christmas present to themselves and us was a 5 day camping safari in the Masai Mara.

I’ve always dreamed of staying in a tented camp on safari.  Camping safaris conjure up images for me of Ernest Hemingway hunting in tall grass, mist rising in the morning, lions hunting outside your tent, wildebeest unsuccessfully dodging crocodiles in the Mara river..but before we could embark on realising this dream, we had to go through… *shudder* …’The Road’.

‘The Road’ was a 5 hour stretch of driving from Kijabe to our camp at the northwest corner of the Park.  The last 3ish hours is along a deeply rutted, rocky track which had been ruined by the recent rains–the guys at the camp later told us that the Masai elders in the area reckoned that the rains were the heaviest in 16 years.  Due to a planning oversight, we hadn’t specified ‘4WD’ on our safari booking, and so we had a 2WD matatu (a Toyota minibus) as our mode of transport there and back.  Thankfully, for 2 out of 3 of our game drives we had a 4WD safari jeep. 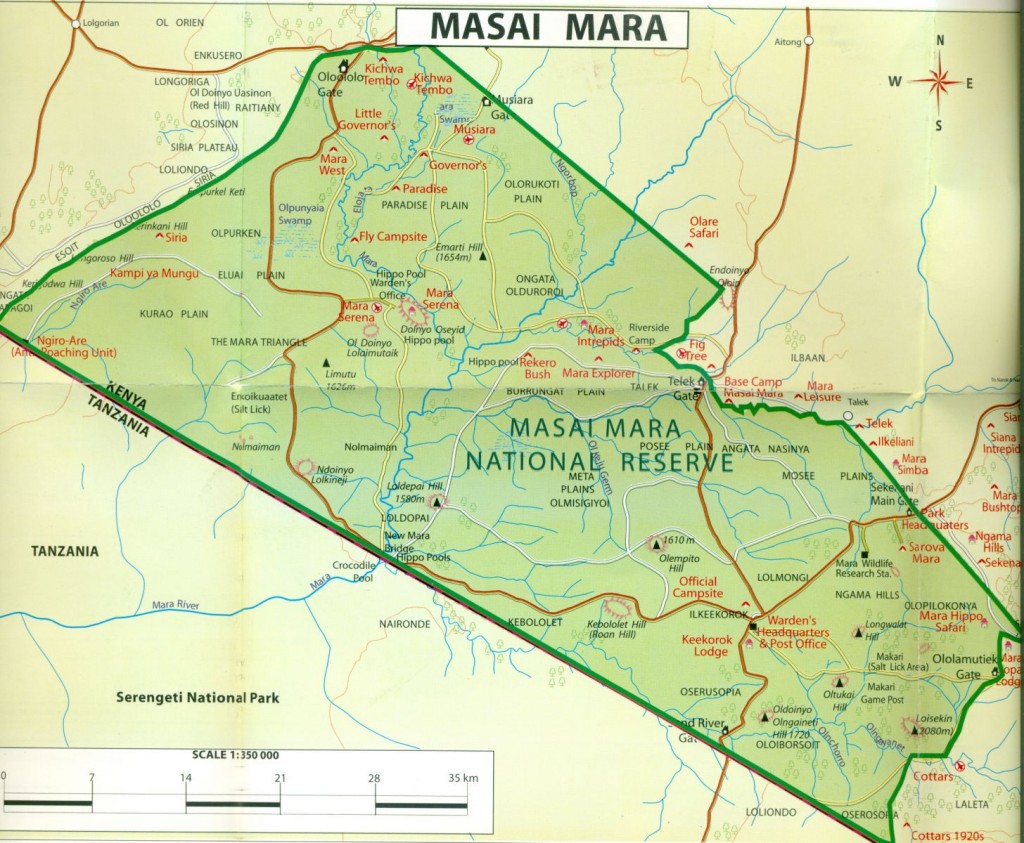 The Masai Mara. Our camp was in the NW corner.

At times we were forced to crawl over the rocks in The Road at 5 km/hr, at others our able guide, John, threw in the towel and raced over the road at 60 km/hr, resulting in jarring and vibrations that made our teeth chatter and vertebra separate.  When we arrived at the camp, we rolled out of the minibus exhausted and it was some minutes before I could hear clearly until the dull roar from the road noise faded in my ears.  Aside:  I am delighted to note that we nearly destroyed the minibus on the trip to and from the camp…the brakes failed, exhaust system holed, and axles felt floppy and loose when we arrived back 5 days later…now THAT’S getting good value out of a vehicle! 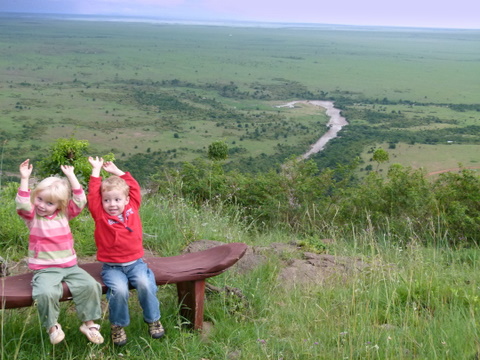 Riley and Liam wildebeest-spotting at the Mara River 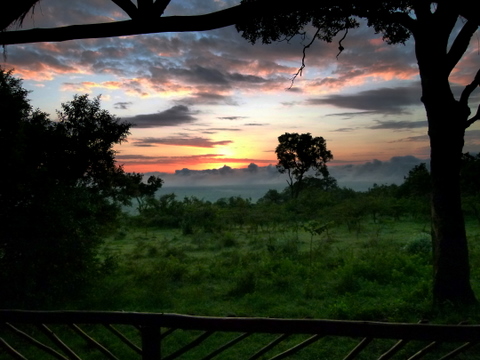 Sunrise from our tent door

The solitude of the Mara is so compelling.  It is achingly beautiful; literally, so beautiful and peaceful that something inside me just…ached.  Deep calling to deep, perhaps. 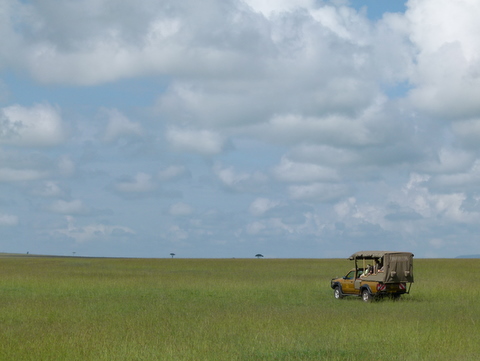 Our safari jeep on the open grass savannah of the Mara

We left on our first game drive at 0630 the day after The Road, planning to have a picnic breakfast and tea in a suitable place.  At 0730 we came across a playful cheetah, basking and rolling in the glorious morning sun near a small herd of gazelles, who were not nearly as relaxed as Mr Cheetah.  They were standing ramrod straight at attention with all eyes on him, as if they were afraid that if they ran, he would somehow run them all down and make a gazelle buffet out of the entire herd.  We had our picnic breakfast about 100 metres from this delightful scene.  We learned later that about 30 minutes after we finished our breakfast and left he made a kill. 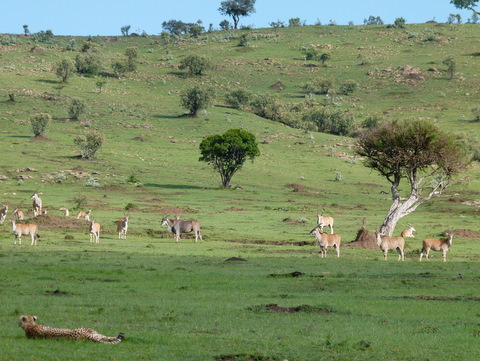 We were fortunate to see so many animals…elephants, lions, cheetah, buffalo, wildebeest, hyena, crown cranes, aurora birds, ostrich, warthogs, Thompson’s gazelle, and about 10 different variants from the deer/gazelle/reindeer family.

I have a confession:  I am not an animal person.  They just don’t do it for me.  I don’t dislike them, they just hold little interest for me.  For me, it is the landscape, the trees, the cavernous sky that takes my breath away.  Achingly beautiful.  Most of the time I was fighting the urge to jump out of the jeep and just start walking in the grass.  Thankfully this urge was tempered by the constant presence of predators. 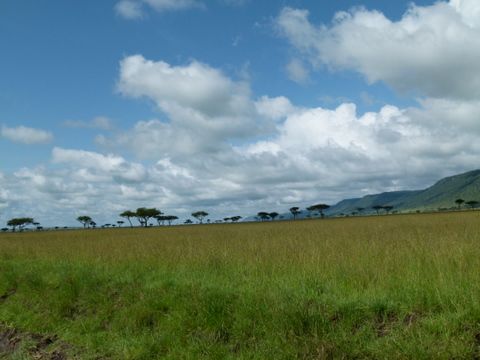 Riley and Liam were troopers…you’re really rolling the dice with young kids on safaris, we had heard, and so we were pleasantly surprised that they bounded out of bed every morning at 0600 wanting to go on a morning safari…they were just so excited.  On our second morning, we heard soft footfalls outside our tent, and opened the tent door to have a peek…out of the mist, about 3 metres away stood a giraffe towering over us.  We quietly woke up the kids, and carried them bleary-eyed to the tent door where all four of us watched in wonder.  After about 30 seconds, the giraffe noticed us staring at him, jumped a little, and galloped away.  It was a magic moment. 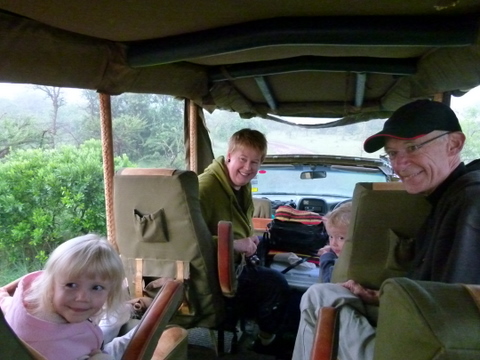 life in the open cockpit

We saw some beautiful lions, including this majestic creature who was conveniently posing for us in front of a rainbow.  I mean, come on, that’s just ridiculous. 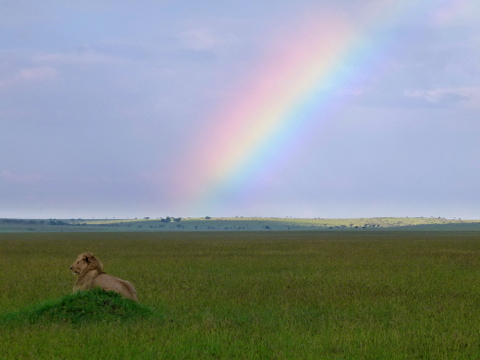 Why yes, that is a lion sitting in front of a rainbow

My favorite birds were the crowned cranes.  They mate for life, we were told by our guide, and if one of the pair dies, the other dies soon after. 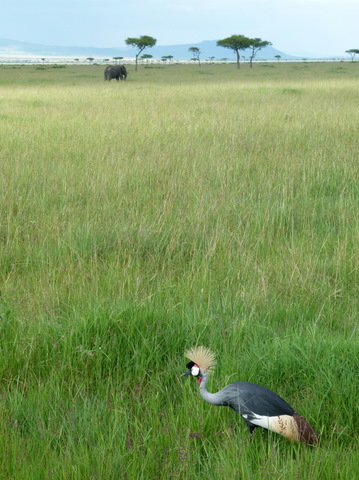 a crown crane and elephant

The kids had a blast; how often do you learn about an animal from a Maisy book or Richard Scarry story, and then get to watch in wonder as it trundles past your open window?  Life is a pretty sweet fruit for a kid on safari. 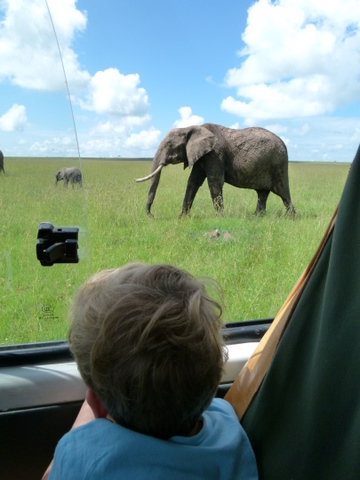 After 5 days of rest, game drives and good food we were ready to return to Kijabe.  The smiles on our faces for this farewell shot mask the grimace of terror that is the anticipation of a return journey on ‘The Road’. 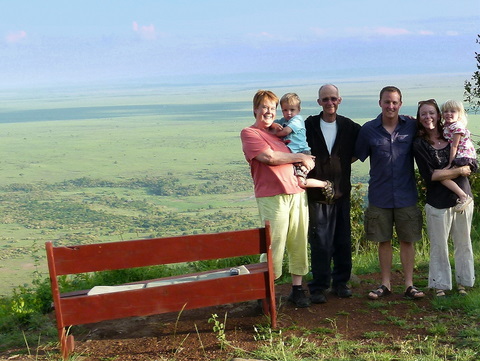 Christmas for the Steere family is usually some hybrid of either an extended Steere or Johns family tradition, as we...