The Hospital made the decision this week to commence construction immediately on the Sanitation Project.  We don’t have the money for it yet, but our leaky, oozy, and in-places-nonexistent septic system has become an unacceptable health and environmental hazard … so we decided we couldn’t wait any longer.

For the detail-interested:  the project involves a complete replacement of the existing sanitation system including decommissioning of the old and undersized septic tanks, and constructing a basic wastewater treatment plant (new transfer pipe, grit chamber, flow stabilisation chamber, and primary and secondary treatment ponds) in their place.  This is one of the “Big Three” projects (water, electricity, sanitation) which will define the future of Kijabe Hospital for the next 20+ years in terms of core infrastructure and sustainability of operations.

Part of my work here in the last year has been to work with the Engineering team to develop a concept design, budget, and delivery plan for this major project, and so I was stoked when it received the go-ahead.  I immediately went into overdrive to generate construction and procurement plans.

But something just hasn’t felt quite right … instead of being excited, I have sensed in the last week a hesitation, a lack of passion … how are we going to successfully deliver this project on top of everything else going on?  How am I going to fit in the additional work of this project alongside teaching at Moffat, taking MDiv classes, coaching and mentoring at the Hospital, delivering the water projects, being a father and a husband, and supporting my wife to fulfil her calling as a paediatrician and medical administrator?

Where are we going to find the money to complete this project, so that it doesn’t end up like so many other African infrastructure projects … half completed, with bits of rusty iron and concrete left out in the open because the money ran out or the aid organisation left? 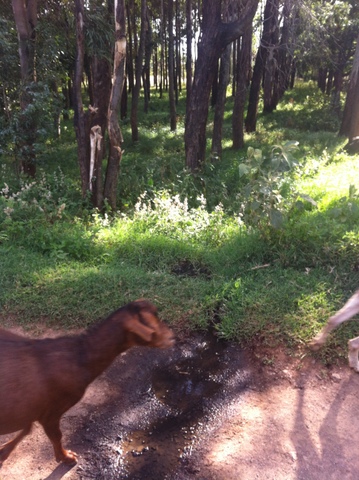 Why yes, that is a goat crossing a stream of raw sewage

I was reading today in Eugene Peterson’s excellent autobiography, The Pastor,  about Roger Bannister, the four-minute miler.  Roger described in his own autobiography what his life was like following his high-profile athletic success.  He was no longer breaking running records, and so he compensated by working harder and harder.  He described himself as a carpenter who “made up for his lack of skill by using a lot of nails.”

I am transitioning from a decade of my life where I have been occupied with achievements and outcomes:  submarine officer, completing a Master’s degree, big projects, speaking engagements … and now, leaving that all behind and moving to a different culture and a different role.

I am trying to slow down, trying to relax … but I am afraid of failing.  I can’t help myself.  When the Sanitation Project gets the green light, I jump out of my chair and rush to help.  I don’t have any margin in my calendar; I am a resource which is 100% utilised, to use the project management term, but I jump anyway.  I am under the influence of busy-ness.

I want to be someone who reads and studies.  Peterson notes in his book that the culture in which we live (even here, in a “ministry” context in rural Africa) can squeeze all the God sense out of us.  It requires detachment and perspective to be aware of the temptations around us.  Including the temptation to do more, feed an over-reaching ambition, try to run the world, control what happens.

I want to be someone who has time to be present to people in unhurried conversations so that I can be part of their growth and we can share life together.

I want to have time read stories to my kids.

David wrote in Psalm 131 more than 2500 years ago something that resonates in me, now:

O Lord, my heart is not lifted up,
my eyes are not raised too high;
I do not occupy myself with things too great
and too marvellous for me.
But I have calmed and quieted my soul,
like a weaned child with its mother…

Do you feel like you’ve lost the forest for the trees?  Is it difficult to see “how it’s all going to work”, or how you’re going to “fit it all in”?

You might like to join me in praying this Psalm, asking the Lord to help you keep your eyes “not raised too high”, but to have a calm and quiet soul, asking the Lord, “what do you want me to spend my time on?”

And then go and do those things, always on the look out for the temptation to embrace unthinking busyness.  Be unapologetically ruthless about saying “no” to those things which others can do, and to which you aren’t called to do at the moment.

A couple of weeks ago I received in the mail a copy of NT Wright's latest book, How God Became King:...