During the Centennial celebrations this week we’ve had the opportunity to spend time with representatives from the Barnett family, who were among the founding missionary doctors of the Hospital.  Dr Arthur Barnett and his wife Peg were married in 1941 and the next day boarded a ship for Theodora Hospital–the original Hospital–located on the grounds of the Rift Valley Academy. 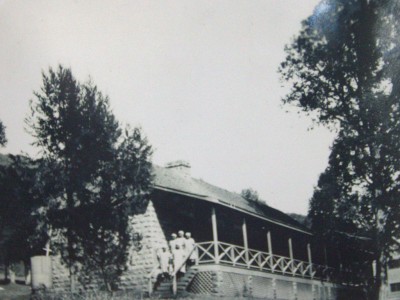 “Theodora” Hospital, 1920’s, on the grounds on the Rift Valley Academy, before it moved down the hill to the present location.  Thanks to David Shirk, who unearthed this along with many other photos!

En route to Kenya, their ship was sunk by the Nazis, along with the medical supplies they were bringing to the hospital.  They were rescued at sea and taken prisoner for 4 weeks.  They finally arrived at Kijabe in 1959 (after serving in Tanzania), and Dr Arthur served as hospital director from 1959-1965, overseeing its transition from an RVA clinic to the construction of the 30 bed AIM Medical Centre down the hill (the site of our current radiology and lab).

We’ve had the privilege this week to sit with Arthur’s younger brother, Dr Bill Barnett, who served as Medical Director from 1963-1979.  Bill led the expansion of the hospital from 30 to 130 beds in the 1970s, adding an x-ray department and 2 operating theatres (including tiling the operating theatres himself!).  At 98, Bill is still a bit of an engineer as a side hobby…he helped find the first reliable water and electricity supplies years ago, and he also created the first Kenyan Hospital Board of Directors. 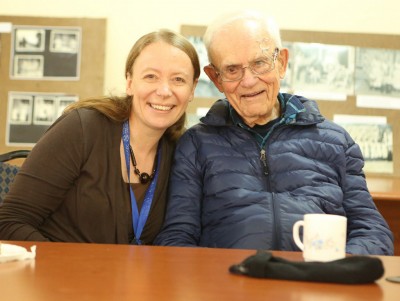 Mardi and Bill Barnett:  34 years separates their tenures as Medical Director, but the same vision underpins.

Mardi sat with Bill yesterday, and he said to her:  “I am so glad to see what you all are doing here.  When I arrived, Nettie (Sinclair) and I wanted to train Kenyans.  We had a lot of opposition from a lot of missionaries – they thought we should just educate Kenyans in reading just to the level of being able to read the Bible.  They said “let the government take care of that education”.  I said “Have you seen the government hospitals?  They are overwhelmed.  We need to educate people”.  And so we did, and started a School of Nursing.”

Bill’s words made Mardi cry…this is our heart also.  We are passionate about serving East Africans by coming alongside and helping build them in compassionate health care, spiritual growth, and leadership.

Mardi said to Bill – “do you know how many doctors we have now?  30 attending physicians – 15 missionary, 15 Kenyan.  160 nursing students.  Dozens of surgical trainees and nurse anesthesia trainees, medical interns, medical students, nursing students.  Look at the legacy you have left.”

This week has been one of deep humility and encouragement for Mardi and I as we meet these “elder saints” who have gone before us.  We have a clear calling and passion for what we do, and I feel like after this week the Lord has helped me to see that in being obedient to this call, we’re simply following in the footprints of the Holy Spirit, who called Bill Barnett and Nettie Sinclair and others more than 50 years ago to do a similar thing.  It has also been a week of deep affirmation for us, and a reminder from the Lord that we are doing what he has asked us to.

What a place to work in.  Like Jacob, we say, “Surely, the Lord is in this place” (Genesis 28:16).  Also like Jacob, we’re tired and we limp a little from our experiences of following this call.  I’m reminded of Bruce Feiler’s thoughts, after walking the desert where Jacob is said to have wrestled with God:

They wrestle, they struggle, one seems to be winning, then the other, until finally Jacob is scarred.  The scar, significantly, does not end up on Jacob’s hand, nor on his head, his heart, or his eyes.  Humans experience God, the text seems to be saying, not by touching him, imagining him, feeling him, or seeing him.  Jacob is scarred on his leg, for the essential way humans experience God, the text suggests, is by WALKING with him.  (Walking the Bible:  A Journey by Land Through the 5 Books of Moses)

We're celebrating Kijabe Hospital's Centennial this week, the culmination of more than a year's preparation and planning by Mardi and many others.  All...