Last night at midnight, for the first time in its 101 year history, Kijabe Hospital closed its doors to all but emergency and critical/ICU patients.  Profoundly frustrated over many issues, including a multiple-year failure of the hospital executive leadership and board to address their very low salaries and long hours, our nurses walked out mid-shift.  Patients abandoned – doctors, clinical officers and a handful of conscientiously objecting nurses working to keep the most critical alive.

Mardi went in at 11pm last night, spending the night in the pediatric high dependency unit doing both nursing and doctor duty, part of a core team who will stand in the gap.  When I went in this morning to bring her breakfast and a coffee, the hospital was a ghost town.

This latest turn of events comes on day 78 of Kenya’s ongoing national doctors’ strike – almost 3 months in which a majority of Kenyans and the many thousands of refugees/illegal immigrants within Kenya’s borders have not been able access routine or emergency medical care.  The desperate have sought care at overrun mission hospitals, impoverished themselves for expensive care at private hospitals, or died.

I was in Thailand two days ago, leading four workshops on management for doctors and nurses serving in resource limited contexts across Asia–it was a terrific and inspiring experience to serve these exceptional Kingdom resources.   However, when it became clear that the breakdown of leadership and governance would result in the nurses striking, I changed my ticket to return home early.  There’s not much I can physically do by being here, but family is my first priority and Mardi was about to step into being both a nurse and a doctor in addition to her supportive background role as the former medical director.

Thank you for praying with us and encouraging us during this lengthy and difficult season…it’s not over yet and is unlikely to end quickly, although it is likely that some substantial changes will come shortly.

Please will you continue to pray?  For wise leadership and effective governance.  For energy and compassion.  For a continued healthy perspective:  that our hope would be centered not in men and women who, like ourselves, are a ‘work in progress’, but in the One who says, “Behold:  I am making all things new” (Rev 21:5).  For perseverance and patience when this “making” doesn’t happen as fast as we’d like it to.

One of our partners (someone we’ve never actually met in person) emailed us in a panic yesterday and said, “I heard you guys were leaving Kijabe because things were so bad!  Please say it isn’t so?”

Here’s something we didn’t expect:  in the midst of this suffering, chaos, frustration, anger, sadness, disillusionment and grief, we have actually felt our calling affirmed and deepened.  By the Holy Spirit.  In many, many conversations with each other, colleagues, and our partnership team.

So what are we feeling at the moment?  This is perhaps an easier question for me to write about than Mardi, as I’m not carrying the memories of the many children who have died during this season.

We’re feeling quite hopeful.  Sometimes it takes an unfathomably severe crisis before real change is possible–particularly in the honor-shame cultural context of East Africa, where relationship and community ties are strong, and those in governance roles are often reluctant to act when action might bring dishonor or shame onto themselves or someone else.  So even though this is a tremendously difficult experience, we’re not dismayed or disillusioned (well, not often), but hopeful that all the pieces seem to be falling into place for profound and good change.

We’re grateful for and inspired by our East African and expat colleagues.  The team of colleagues that we have around us are one in a million–encouraging, sacrificial, humorous, aligned around who and what we all feel called to be and do.  I can’t imagine how difficult this season would be if we didn’t have such a tremendously committed medical team.

We feel supported and encouraged by our partnership team.  You have ‘skin in the game’, whether through prayer or financial support or both, and we know you are feeling the pain as well as the hope of this season with us here on the ground.

We’re feeling grateful that we have an upcoming scheduled home assignment in Australia (starts mid-June):  it will be timely.

We’re feeling inspired by our Catholic brothers and sisters in church leadership, who have been ‘bearing witness’ during this difficult period.  Entreating both the government and striking doctors to put aside their differences, they put out a statement entitled “The Poor Are Dying”, which acknowledged the enormous physical and financial toll.

We feel unimpressed with the silence of the denominational leadership of the Protestant and Orthodox churches, who for whatever reasons have remained silent publicly.

We feel that this is not a black and white issue:  while the reasons for doctors and nurses to protest and seek changes are many and genuine, the ways in which both groups have gone about seeking change will have devastating and irreversible consequences for real people, who are actually dying, and their families.  An inability to negotiate wisely has resulted in those trained to protect others walking off the job, without providing any emergency or critical care – violating their moral and professional codes of conduct.   No, there’s little black and white in this situation, and both sides have points to make.  Like in most of life…many shades of grey. 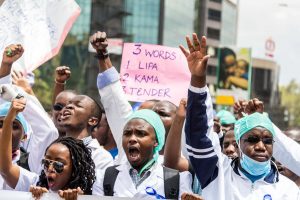 We’re grateful for the continuing mission of Kijabe Hospital and the many people who support it:  for more than a century, it has been a place of healing, training, and ‘sending out’, and despite these recent issues, will continue to be so for a century to come, we pray.

We are grateful for the nearness and kindness of the Lord, who has reminded us gently and repeatedly these last few months to:

So, for the moment, we’re buckling down and weathering the storm.

Since we started working in Kenya 6 years ago, I've learned is that a crucial (and often-overlooked or postponed) part of...